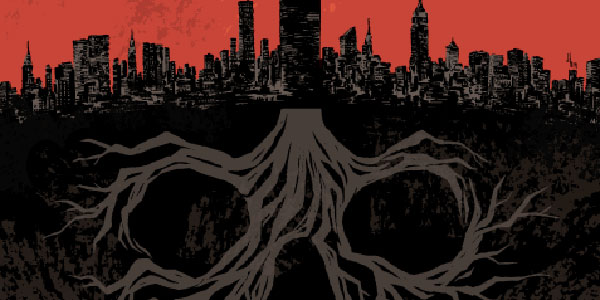 I’m such a sucker for skulls. so when I noticed it on the cover for Image’s new release called Trees, it struck a chord and lured me into purchasing. The story that Warren Ellis and Jason Howard created takes place in a city of the future, where people spy on each other by duct taping cellphone cameras to kites. I should admit early on, that I found parts of this book confusing, like with the first note saying “ten years after”. After what? Are they referencing the cybernetic robot police guys that are capturing or killing everyone, or maybe it’s the giant black tree-looking cylinders that landed here on earth, and that can spill toxic ooze and fry everyone or something. Okay, probably the second one.

It seems to me that Ellis is positioning the reader to fully understand the landscape before giving us the unifying plot line. The book follows a few different characters and how life has changed since the appearance of the alien trees. We meet a guy that wants to be mayor of New York City, a young Chinese artist that moves to a protected city called Shu, and a couple of scientists researching small flowers at the base of a tree in North West Spitzbergen. All of these introductions paint a bit of a broader picture of how life is adapting to the change that the trees bring.

Trees #1 is cryptic and leaves the reader with far more questions than answers. There’s a scene with the Chinese artist where he sees a woman in her underwear close a door, and it focuses in on her crotch. It looks like she’s playing with a mixed set, but the illustration and the descriptions aren’t overly detailed. After finishing, it felt like the book was more of a movie preview, showing a bunch of quick clips without getting to the meat of the story. The concept is interesting, hopefully with more progression, the story will be too.