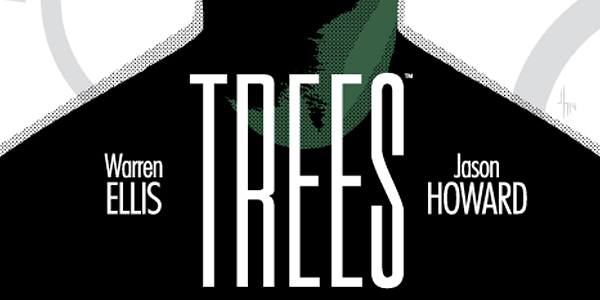 Image released Trees #2 this week, a continuation to the the story about weird alien trees that inhabit the world and the conflict they cause. Trees #2 is written by Warren Ellis with art by Jason Howard. Visually, the issue explores a range of page layouts and the illustrations are detailed and filled with emotion. However, this story arc continues to be one of the more convoluted series I’ve read.

Trees #2 picks up right where the last issue ends. The team in North West Spitzbergen are assessing some flowers found around the base of their big ass alien tree. The flowers perplex Dr. Marsh, because these type of flowers aren’t known to grow in the frigid Northwestern Spitzbergen climate. We meet more of the team that is stationed there, and find out more about what life at the Blindhail Station is like.

Just like the previous issue, the story jump cuts to a completely different place. We end up seeing a new character drawing on some rocks. This time it’s an older dude, sitting on a cliff, overlooking Cefalu. A couple of thugs try and mess with him, but it turns out this old timer can handle himself. Then, BAM! Jump cut down to Somolia to meet up with a pair of business men. There’s some talk of pirates and oil reserves and the setting for a brooding turf war. BAM! Jump cut back to Spitzbergen where there’s some more talk of black flowers. Seems like Marsh isn’t just being obsessive about the flowers, they really aren’t acting like any flowers they have on record.

Trees #2 offers way more questions than it answers. Ellis is continuing to build the foundation for his pyre, leaving just enough detail to keep the reader curious. There continues to be introductions to new characters, which leads me to think we aren’t done meeting people. With sprawling casts, the chance for death increases, and I want to be there when the trees start unleashing their wrath. I look forward to when the threads start crossing and the greater mystery unravels.