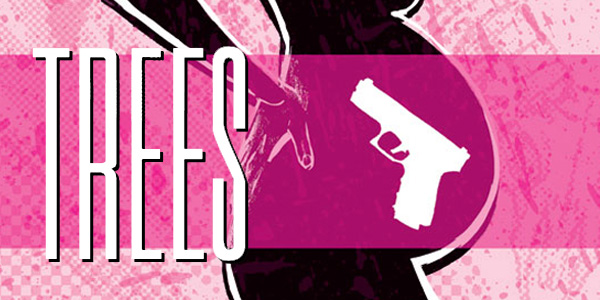 Trees #3 has the world infested with alien trees, but no one seems to care.

New this week on the Image imprint is Trees #3, a continuation in the tale of alien trees occupying earth, and humanity’s plight to adapt to their presence. The story is written by Warren Ellis with art by Jason Howard. Trees #3 has been consistently told in a method of speed hopping from one set of characters to another, slowly building an understanding of how they all interlace. Also consistent is the lack of clarity for the readers, as we’re left to figure out what the hell it all means.

The story picks up in Italy with Professor Luca Bongiorno (though you don’t learn his name until the end of the issue) sitting at a cafe, sipping coffee, and drawing. He was the older guy from the last issue that was able to disappear from the two thugs. Well, turns out he wasn’t able to give them the slip permanently, because the female thug, who goes by Eligia, has managed to catch up with him. She tails him all day, following him into a bookstore. Ellis chooses to show the professor as an enlightened, yet humble man. The professor continues his day, seemingly unfazed by Eligia’s presence. While on stakeout, Eligia gets interrupted by someone from her boyfriend’s group. The interaction is used to help the reader better understand how strong willed and independent Eligia is, as well as highlighting her persistence and place in the world.

After this, we jump back to China and meet up with the young Chenglei. He is the introverted artist that moved to the city to explore the trees in the first issue. Lately, he has remained perched in front of his window for days, creating study after study of what’s happening right outside of his window. He is joined by a woman named Zhen (who may or may not be transgendered – note my confusion regarding this in my review of Trees #1). Zhen is the niece of the building owner, and has been tasked with pulling Chenglei from his hole. After some back and forth, it appears Zhen manages to convince him to venture outside, but the story jumps back to Italy before you find out.

We see a wide establishing shot of the professor walking through a field (which is oddly devoid of trees) as well as a shadowy silhouette tailing him. The pair make it closer to the house, where the reader is reminded that the silhouette is Eligia, on what appears to be a mission of vengeance. She watches the professor enter his house, then pulls a knife before following him inside. Once inside, the tables are turned, because not only did the professor realize he was being tailed all day, but he also makes Eligia look pretty dumb for bringing a knife to a gun fight. Ultimately, Eligia isn’t out for blood, she’s out for knowledge, and pleads with the professor to teach her his disappearing trick. They talk about her boyfriend, and the life she’s built for herself, and eventually it appears he’s agreed to help her as the book closes.

Trees #3 doesn’t feel like it brought the readers closer to an ah-ha moment, but it is an entertaining offering that continues to build the suspense slowly. For a book about alien trees inhabiting earth, I was surprised to count only 2 panels where the trees are visible. It doesn’t make the story any less interesting, it just requires the reader to further contemplate how these moving parts will assemble into Ellis’ machine. Howard continues to create wonderful scenes filled with life and energy. He displays control over his medium by perfectly balancing the engaging foreground image atop loosely detailed backgrounds that root the reader to the story. The last few pages might be my favorite so far in this series. The team paces this part of the story well, allowing the story to build nicely, creating suspense with a combination of small action panels with large establishing shots. I can’t help but focus my attention to the last panel. It shows the professor flicking his cigarette butt onto a pile of fresh firewood. I’m hoping that it’s Ellis, foreshadowing the great fire of action that is overdue. Either way, I’ll be picking up a copy of Trees #4 on August 20th.