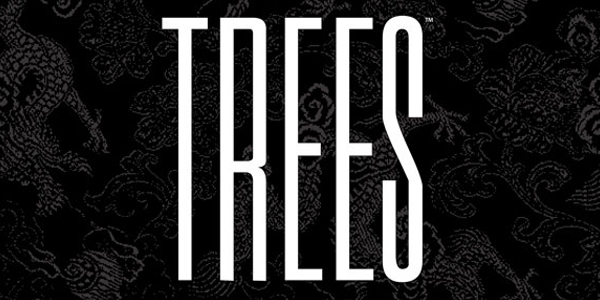 Tensions rise world wide as the threat of the trees continue.

Image released the next installment in Warren Ellis’ convoluted creation, Trees #4. Together with artist, Jason Howard, they continue to paint a perplexing portrait of life on earth following an alien infestation. With each issue comes a bit more clarity, but Ellis guards the big picture closely as we take one step closer towards understanding.

Trees #4 opens with Chenglei and Zhen out on the streets. Despite living in this new city for an entire week, Chenglei hasn’t spent much time outside of his bedroom. So, his landlord’s niece, Zhen, takes it upon herself to thrust the hermit into daylight. Chenglei is supposed to be attending an art school, but has yet to show up. As they’re walking, Zhen notices a group of her friends. While she says hello, the reader gets to see some inner workings of young Chenglei. As he’s left alone, Howard illustrates the world around Chenglei becoming a faceless blur. It’s uncertain, to me, if this is a meditative state or an anxiety attack. Either way it is Zhen who disrupts his zen, and decides it is the right time to address the elephant in the room…street. Ellis chose to address the topic of Zhen’s gender head on, making readers like me ashamed that they even questioned it in the first place. It was matter of fact, and we get to watch these words process in Chenglei’s mind and on his face. Just like in life, it can be confusing at first, but ultimately it is their choice to live the way they want to, and it’s just best to accept who’s in front of you and move on. The world would be a better place if more people shared this mentality.

Eventually they make it to the art school, which is illustrated as a wonderful place of creation. Chenglei gets some directions on where he should be, and leaves Zhen at the door. As he makes his way to his sixth floor studio, he passes an assortment of curious contraptions. It’s clear that Chenglei begins to feel more and more comfortable with each person he meets. And when gets up to where the painters are, he’s met with a gorgeous view of the Beijing skyline.

On the next page it’s back to the icy atmosphere of North West Spitzbergen. The team up here is researching weird alien poppy flowers that seem to be coming from the tree near them. Marsh, one of the scientists, is seen examining some fragments of a flower through a microscope. When magnified, the flowers appear to be comprised of metal filaments or wires. Sarah, another one of the scientists, is less intrigued by Marsh’s research. Not due to lack of interest, but due to the flowers adding noise to radios in the area and causing other disruptions. The conversation slowly builds, adding tension with each sentence. By the end of our time in North West Spitzbergen, we see Marsh screaming about how he doesn’t want to feel like his life has lost meaning.

Lastly we jump to Paris, France and meet up with Malek Boniche, who we haven’t seen since Somalia in issue #2. Malek is seen cursing his cell phone’s low battery while begrudgingly walking to work. While arguing with his phone’s AI, he gets a call from Chloe at his office. She tells Malek to check the news on his phone, which due to a low battery, he is unable to do at the moment. She presses some buttons and takes off the phone’s governor, allowing him to stream the footage. Malek pokes fun at the big brother like control over his device, but quickly turns his attention to the video that is being displayed. While Malek was in Somalia talking to their President Rahim, he told Malek that he viewed their tree as a strategic stronghold. He further described it as an ideal watchtower to view their pirate neighbors. With the closing of issue four, we see Rahim stay true to his word. Helicopters can be seen flying to the top of the tree, and depositing evil looking weaponized machines that appear capable of firing multiple missiles simultaneously.

Trees #4 is yet another confusing offering from the mind of Warren Ellis. Much like last issue, my main complaint about the story is the limited amount of screen time the trees themselves get. Up until the end of this issue, there’s a chance you could have forgotten they were even there. This could be Ellis’ attempt at reeling his readers in, making them feel part of this world, and so comfortable with the sight of trees that they slip into the background. And again, it’s Howard’s fantastic depiction of this foreign world that makes for such an engaging story. He combines a nice mix of hard edged panels atop borderless landscapes which blend into a pleasing fusion of panel design. I find myself going back to the earlier issues for clarity more with this series than any of the other current series I’m reading. Not to say that this is a bad thing, but due to the complexity of the story, I could see how this would be easier to digest in trade form. Despite that, I am enjoying getting to know a little more about what’s really going on, and anticipate Trees #5 due out September 17.