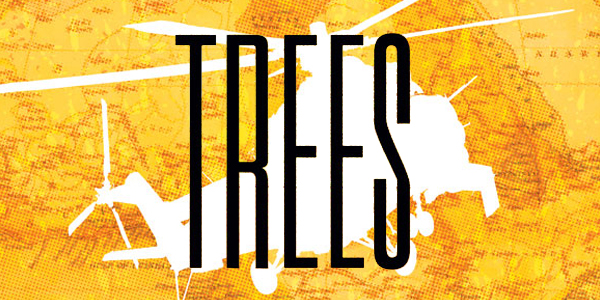 Image Comics new release Trees #5 shows us that some trees provide shade, while others provide a good foothold for an invasion.

New this week from Image Comics is Trees #5, the next chapter in Warren Ellis’ strange story of alien flora. The art, which is one of the strongest elements of this series, is created by Jason Howard. We pick up with Malek Boniche as he watches the news of Somali President Rahim, who is positioning a large amount of war machines atop the tree near Somalia. Ellis is building towards something, and with this latest offering, I can’t help but think we’re on the cusp of something big.

Being the first to militarize a tree is a pretty big deal, regardless of whether Rahim’s forces can maintain their hold. We learn from Malek that the skin of the tree is unique, allowing nothing but paint to stick to it. Eventually the tanks are going to fall down, but probably not before they do some serious damage to the people on the opposing Puntland side. Malek continues to emphasize how important this is due to Rahim proving the trees don’t react to human interaction. But at the end of the day, Malek’s main concern is the news, and his assistant suggests it’s time to see if he can get another interview with Rahim.

We visit briefly with Chenglei as we get a very interesting side by side view of current life in Beijing. Chenglei can be seen slowly waking up, after being talked into a party by his landlord’s niece. He can be seen laying in a bed surrounded by a random assortment of limbs, all supported by soft blue sheets. Contrasting this is a distant shot of Beijing, that shows a growing number of military vehicles speeding towards the city. Our last shot of Chenglei is of him at a distance, surrounded by five almost naked people ranging in gender and nationality. Clearly, he’s enjoying himself.

From here we check back in with Luca and Eligia in Cefalu, Italy. Luca is giving her a history lesson on the house that they currently inhabit. It appears that Luca see’s something in Eligia, and is willing to trust her despite the fact that she attacked him in the second issue. He basically tells her that he is going to help improve her, to which she has little objection. He decides to start with knife skills, more importantly, knowing when and who to pull them on. Luca goes on to tell us that people act like the trees have always been there, but he doesn’t trust them. So he studies them, studies the way they impact the people around them. Luca seems like the smartest person on the planet to me, hopefully Ellis keeps him around for a while.

We leave Italy and head to the frosty fortress up in North West Spitzbergen and meet up with a foul mouthed scientist named Adamski. In the last issue, a scientist named Marsh was studying the flowers that were growing near the base of the tree near them. The flowers however we’re giving off some weird radio frequencies and messing with all the other scientist’s equipment. Well judging by how pissed off Adamski is, it’s pretty safe to assume Marsh didn’t get rid of the flowers like he was supposed to. Adamski’s rage catches the attention of Jo, another one of the scientists that Marsh was talking to in the previous issue. Together they head towards Marsh’s lab, but are met by some odd sensations and a locked door. After some gentle persuasion from Adamski’s oversized monkey wrench, the two open the door on a horrific sight. Marsh’s lab is covered wall to wall in the poppy flowers, and he’s pretty dead-looking in the middle of the room, slowly being consumed by the plants he was studying. After finding him, the rest of the crew bring the flowers out and burn them, and we’re left with some parting words of wisdom from Warren. Something really big is happening out there, and nothing is permanent.

At first I found this series really trying and hard to follow. So much weird stuff would happen without any real justification as to why it was happening. Now that we’re well into the Trees run, Ellis seems to be letting us in a bit as to what’s really going on. With the scenes like the ones from China and Somalia, it feels like this story is on the verge of war. Through Chenglei and Luca’s stories, we get to see how life evolves around whatever is thrown at it. Both war and adapting to the environment are compelling story lines, and it’s interesting that they get to play against each other in the Trees arena. Another reason I keep coming back is to enjoy the art that Jason Howard is drawing. Howard uses a variety of techniques to keep his panels feeling fresh and his reader’s attention focused. I enjoy when an artist can balance borderless frames with hard edged ones. His people are very expressive, allowing you to understand their feelings before you read what they’re saying. and more importantly, stay embedded in the story. I’ll be heading to the shop to pick up Trees #6, out October 15. If you’re willing to invest a bit of time into a bizarre book, then Trees might be right for you.