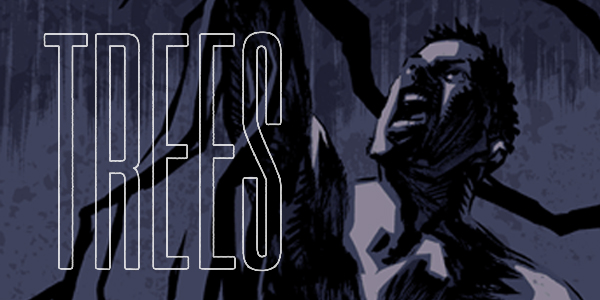 Image Comics released Trees #6 the next issue to Warren Ellis’ bizarre tale of alien trees inhabiting earth, and he has Jason Howard drawing the madness. Although hard to follow at first, I like how this story has a few different point of view characters all working together to progress the storyline. Issue six starts briefly with Eligia and her controlling boyfriend Tito. Eligia has been studying under the formidable Luca, who has altered her perception of Tito slightly. We come back to them later in the story, but for now it’s off to China.

We meet up with Chenglei, the morning after his first orgy. Zhen’s uncle, who also happens to be Chenglei’s landlord, sees him contemplating life on the stoop of the building. Chenglei slowly admits to partying with Zhen, then eventually waking up with Zhen. Being from a small town, the range of people and personalities that his new surroundings has to offer is unsettling to Chenglei. Until recently, he didn’t know a transgendered person existed, and now he could be potentially in love with one. But that was the reason he came, to see the experiment under the tree. I liked how the story does a quick reminder image of the staff in North West Spitzbergen whose forager robot is now covered in poppy flowers. Once we’re back with Uncle and Chenglei, they continue discussing Chenglei’s next move. Ultimately Uncle tells Chenglei to talk to the girl, because he would know, he used to be one. Right before we leave China, we see a team of military soldiers walking the streets with video cameras, looking very intimidating.

We rejoin Eligia and Tito as he explains some of the goings on of his business. See, Tito makes his money off of extortion, but he doesn’t protect local businesses from vandals. His money comes from politicians with homosexual interests. They fear the backlash of coming out, so they pay Tito to keep it quiet. It’s surprising how forthcoming Tito is about all this, given how controlling he is with Eligia in the previous issues. Eligia even gets him to tell her how he uses his buddy Davide as bait to lure them in. We leave the bar again briefly as a very pissed off looking Eligia heads outside for a smoke.

We head back to China to watch the showdown between Chenglei and Zhen. Chenglei was procrastinating the confrontation, but Zhen doesn’t let him delay too long. She breaks into his apartment and is waiting for him when he comes home. What follows is a few pages of compelling dialogue that left me rooting for these two. Just when you think Chenglei is going to have a negative reaction, he hits Zhen with beautiful words of encouragement. I especially liked the little quip about how Chenglei always is the boy, showing how unfamiliar all this is to him. However, the two finally lock lips in a full page panel that shows their budding love in front of a menacing looking gun ship. As Uncle puts it, it’s not very artistic.

Before the close of the book, we’re hit with three quick panels causing us to globetrot for info. First Eligia intercepts Davide as he’s walking into the bar, and eerily propositions him with friendship. She knows something Tito doesn’t know she knows, and because of this, her and Davide should be friends. No idea what she means, but it’s intriguing given the time Eligia spent with Luca. Then it’s back to North West Spitzbergen to the bedside of Marsh. It looks like he may not be dead, but he might want to be soon. In his last panel we can see some of the flowers he was studying starting to grow out of his forearm. Lastly it’s a very foreboding look at the Puntland tree where a team of Somali war machines sit atop it, preparing to strike. I’m not sure if the air swirling under the tree is significant, but seeing it against the red sky would suggest the onset of war.

Trees #6 continues to delight with a web of clues and cues that has kept me speculating from the first issue. Ellis continues to position his characters in just the right situations for the real struggle to start. Between the gunships in China, the threat in Puntland and the super cops we saw in the first issue, it feels like this story is headed to war. It could provide some interesting conflict, especially if trees around the world start acting like the one in North West Spitzbergen. Howard continues to draw the crap out of these panels. I enjoy the crosshatching that doubles as motion lines, causing every panel to jump to life. It directs the eye wonderfully, even if it’s towards Chenglei’s crotch. The fun continues in November, when Trees #7 is due out on the 12th.