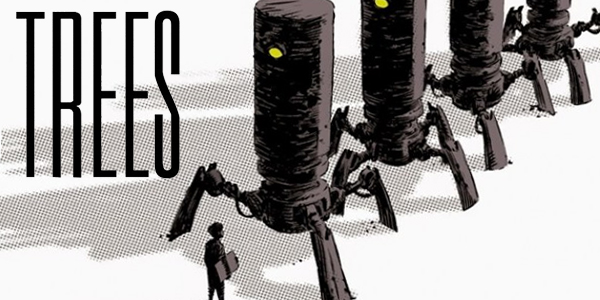 The Trees are here for a reason. Unlike the ones we know, it would seem these Trees aren’t here to help us.

Back at the end of November, Image Comics released the next chapter to Warren Ellis’ story about freakish flora. Trees #7 is illustrated by the one man team of Jason Howard and tells the story of a possible future where large alien trees have inhabited parts of the world. They sit dormant yet brooding, as they watch insignificant men fight around them.

Trees #7 starts out in China, and a quick stop with the naked Chenglei who is walking around his apartment while showing off his dangly Chenglei. Also in his apartment, we can see Zhen, his transgendered girlfriend who he’s been falling madly in love with since the beginning of the series. We’re offered some insight into the inner workings of Chenglei, as he talks about not doing a human drawing until he met Zhen. Zhen inspires him, like any good muse should. It’s a short, two-page visit, but we’re left with Chenglei admitting that he is truly in love with Zhen. It’s touching to notice how far he’s come since we first met him, and comforting to see the timid little mouse boy starting to come out of his shell.

Next we head up to North West Spitzbergen, where the crew there is recovering from the actions of their fellow scientist Marsh. Marsh had been studying the black flowers that were coming from the base of the tree, and in that research, got himself sick with the flowers. Like growing out of his body kind of sick. One of the other scientists finds his notes, and notices that he was on to something even bigger than was expected. Dr. Siva, one of Marsh’s peers, has little respect for him. However, when she sees what he’s been working on, her eyes light up. Something was off in his calculations, meaning they are in more danger than they know. Dr Siva heads to talk to her superior, while Jo goes to Marsh, but not before noticing a new crop of flowers growing in the corner of the room.

On the next page, we shoot towards the equator, and meet up with Eligia and her mentor Luca discussing their Italian Trees, and what Luca has learned about them. He talks about what it was like right after the Trees came. How a lot of people left, but not everyone. The people that stayed saw less police support, and a raise in shadow economics. The topic turns to Eligia’s history and she delves into her tough upbringing and when she lost her v-card, because she assumed that’s what Luca was after. Despite what she may think, he wasn’t. It seems that what he is after is having a tough as nails chick by his side in a more platonic fashion, and he’s doing that by empowering her, showing her she can provide her own food. And when he hands her back the blade she once tried to cut Luca with, he shows her that she may have to fight for her own freedom as well.

Next stop on our two-page whirlwind tour, we check back in with the reporter Malek, who is in the middle of a video interview with the Somali President Rahim. Rahim positioned a group of military vehicles atop the Puntland tree, which is right next to Somalia, with his guns pointed at his neighbors. Up to this point, it was thought that vehicles couldn’t get a grip onto the Trees, but thanks to the Russians, the Somalis get to test the new technology. The real question is what’s the next step in this game that Rahim is playing. Puntland is identifying this as actions against them, and have promised to respond with force. While they’re in the middle of the interview, reports are coming in that Puntland is firing rockets at the Somali troops. When Malek asks, Rahim leaves us with a simple explanation. He operated within the law. By firing rockets, they’ve responded outside the law. So now he’s forced to do what everyone thought he was going to do from the start and fire back.

So much has happened, but we’re barely halfway through the issue! Next we jump back to Jo up in North West Spitzbergen who wakes up Marsh with a flurry of paper. Apparently Marsh is less dead than he looked in previous issues, and now has recovered to the point where he’s able to talk. What his notes, and ultimately he was able to find out is that the flowers aren’t just flowers. Each petal is a broadcasting dish, connected through the tree, and acting as an amplifier. Marsh thinks the Tree is going to talk, through the flowers, but when it does it’ll be deadly. The heat that will emit from the flowers will be enough to melt the snow. What’s worse is that without the snow, the poppies will thrive and emit more seeds into the wind, spreading their influence exponentially. Everyone at the station has been slated for removal, but Marsh seems reluctant to leave.

We head back to Italy and find Eligia and Luca hunkered down with a bottle of wine while they go over their plan for Tito’s destruction. Tito controlled the town by force, but with a few simple adjustments, Eligia thinks she can outdo him tenfold. The two talk a bit on the Tree’s effects on the climate, and what it’s doing to the local animals, but what they’re really there for is to lay the plan against Tito. Before Eligia can execute, we spend a couple pages in Puntland where we see fire erupting from around the tanks on top of the Tree. Next is a hail of missiles, coming down on the heads of poor people of Puntland. This is concluded with explosions, then a death-black cloud of smoke. After that, we head back to see Eligia talking to Tito’s buddy Davide, who is pissed about being used as bait. The two have agreed to something heinous, and when we hear Tito’s voice coming from behind Eligia, we can put together what’ll happen next. Tito joins Eligia to exchange a few words at the edge of a cliff that overlooks Cefalu, under the guise of coitus. Before Tito can get his pants off, he’s met with the blunt end of Eligia’s knife to his forehead. This causes him to be blinded by the stream of blood, and unable to see Davide approach from behind. Davide puts one hand on Tito’s shoulder, with the other on his grundle, and with ease, launches him off the cliff. We see a very unnerving shot of Tito’s body falling towards the pavement, followed by the scene of impact, then…the end.

Trees seriously just keeps getting better. What started as a slow story that highlights way too many characters has become an enthralling tale about perspective. Each person is able to shed light on the Trees existence in a different way. Some use them for creativity, while other use them for knowledge. There are those who use them for war as well. The tension seems to be culminating, with something truly big looming on the horizon. I’m still curious when the senator in New York from the first issue will come back into relevance. Howard’s art has been fantastic throughout this entire run. With all the various faces he’s forced to draw, it’s excellent to see the clarity between characters, making it effortless to keep track of who is who. I also really like how comfortable the two creators seem to be with some uncomfortable subject material. Not everyone is eager to deal with homosexualtiy or transgenderism, but Ellis and Howard treat it with such class, that you can’t help but respect it. It is treated so normally that it becomes secondary to the story at hand, and fades into the background. If only real life progressed this seamlessly. Trees #8 isn’t out until the new year, but judging by the teaser, the fecal matter is flying towards the fan.