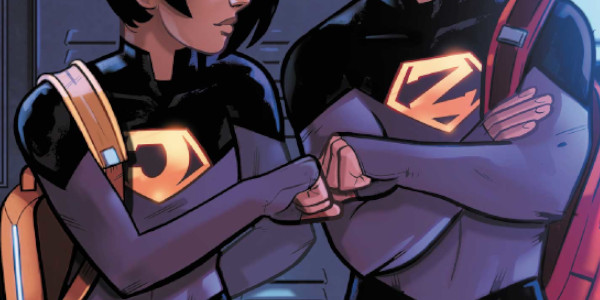 If you are a fan of the 80’s DC world then you know who the Wonder Twins are, and they are being brought in to the modern DC Universe with some teen drama.

I was not sure what to expect from this book, but I was surprised how well the story was full of nods to the origins of the characters while keeping it fun and light. Zan and Jayna come from a far off world this time and instead of them just being teens on the Justice League team they have a real backstory and a life outside the Hall of Justice. We get to see how they got to earth, what it is like for them to adjust to teen life on Earth, and what they have to do for a after school job. All the events in the book poke fun at the creation of these two 80’s transplants as well as a cameo or two from the Super Powers era of the DC world.

I won’t ruin any of the moments in the book but it reads like Formerly Know As The Justice League, some serious plot lines being run though the book but with a comedic tone. It was a quick read, that had me laughing out loud at some of the jokes, so grab this book if you are looking for a light read in between issues of Heroes in Crisis.

Oh and you will never ever look at a thunder storm the say way after you read this book!

This book was provided by DC Comics for review.