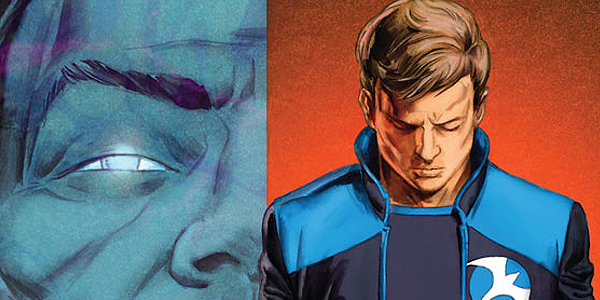 Instead of bombarding the market with a ton of titles all at once, Valiant’s controlled, patient re-introduction to their rich universe has been handled with class, having debuted one new A-list title each Month since May.  While last month’s sophomore issue of X-O Manowar and intro to Harbinger focused on establishing solid, believable origin stories for the characters, July’s books are absolutely bursting at the seams with pure action; packed with enough raucous gunfire, fiery explosions, and epic battles to make Michael Bay salivate. 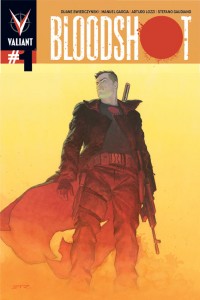 First up, let’s check out this month’s debut issue of Bloodshot.  Although, on the surface, parallels can be drawn with similarly violent, anti-hero titles like The Punisher, Bloodshot was always a smarter book than it got credit for.  His nanite-enriched blood and mind-bending origins complimented the title’s gratuitous violence with a great sci-fi twist that truly put it head-and-shoulders above the masses of gun-toting justice dispensers.  Luckily, the relaunch keeps these elements intact, offering enough death, destruction, and deception to please new and old fans alike.  Writer Duane Sweirczynski hits you with a shocking misdirection halfway through that turns the story on its head and keeps you guessing.  It’s a fantastic way to kick the series off and, while it leaves you with more questions than answers, it lays a solid foundation for what’s to come.  As far as the art goes, the book utilizes two artists, Manuel Garcia and Arturo Lozzi, to give a distinctly different feel to Bloodshot’s reality and hallucinatory memories.  Both look stunning and, while I’m usually not the biggest fan of splash-pages, Bloodshot #1 has one of the coolest two-page spreads I’ve seen in a while.  In it, the nanites in Bloodshot’s veins begin to reconstruct his mangled corpse — a challenging idea to attempt to illustrate, Garcia pulled it off with with elegant simplicity.  We’ll have to see if, in the coming issues, they’ll start revealing more about who Bloodshot really is (it seems like he may actually be a soldier in this iteration instead of an ex-mobster) or his connection to Rai, who will likely be popping up in his own series later this year. 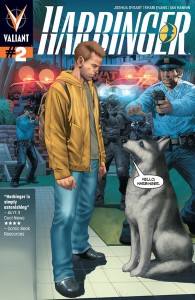 Project Rising Spirt, who also plays a part in the aforementioned issue of Bloodshot (Valiant is already at work on building that strong continuity that was so prevalent in the 90’s) descends on Pete Stanchek in Harbinger #2.  While the first issue chronicled a period of Pete’s life on the run, issue #2 all takes place in an extremely brief amount of time.  As his pursuers close in following the events of the last book, Pete finally unleashes the full extent of his powers — an Akira-like display of telekinetic fury.  Goaded into action by Toyo Harada, head of the Harbinger Foundation, Pete mentally cripples and army of foes – much to the horror of his already emotionally unstable friend, Joe.  Exhausted from the ordeal and with no place else to turn, Pete reluctantly decides to leave his friends behind and join Harada’s foundation, where he can learn to harness and control his unique abilities.  Before he does, however, he frees Kris from the bonds of his creepy psiotic-induced forced-affection and, ashamed of his actions, offers an apology.  Needless to say, she’s not happy.  It was actually a bit heartbreaking to see Pete come to a realization that he’s been doing more harm than good both to himself and those around him, and the point is really driven home by the outstanding detail in which emotion is portrayed on each character’s face.  Khari Evans’ art and Ian Hannin’s color work really kill it in this issue.  The suburban battleground that dominates the first act benefits from beautiful contrasting images as subjects within the same panel are cloaked in darkness or washed out in the glow of a helicopter’s spotlight.  One of my favorite panels of the book shows Pete altering the trajectory of bullets around him, resulting in something that looks like a swarm of harmless fireflies floating around him.  Similar to Bloodshot, this issue also harnesses the abilities of a second artist and colorist to handle a cryptic prologue.  Lewis LaRosa and Moose Baumann weave a short tale set ten years in the past as Toyo travels to India to encounter an infant Psiot who subconsciously triggers terrifying memories in those that look upon him.  Equally fascinating and disturbing, you can bet that child will play a role in the upcoming issues. 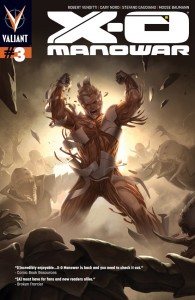 Finally, we get to see Aric of Dacia put the Armor of Shanhara through its paces in X-O Manowar #3.  Functioning as an extension of his body, Shanhara replicates Aric’s severed hand and offers a devastating array of firepower.  Leading Gafti and the rest of the escaped slaves to freedom, his friends suffer heavy casualties and, as such, Aric gives no quarter – firing energy-projectiles from his wrists and fashioning a broadsword from pulsing electrical currents to cut down his foes.  And all the while, his one-track mind simply wants to get back to Rome, to continue his true fight with the Roman Empire on land.  He partially gets his wish when, in the blink of an eye, both Aric and his armor are mysteriously transported to present-day Italy, where they are quickly surrounded by a modern Roman police force… Definitely looking forward to seeing how this plays out next month.  As I’ve now come to expect from X-O, Robert Venditti’s writing is superb and Cary Nord’s stylish artwork fits the title perfectly.  There is one specific sequence in X-O #3 that I thought just looked brilliant — the action takes a brief intermission as Aric is blown out of the Vine’s spacecraft and is free-floating in deep space.  Among scenes showing Commander Trill readying the Vine’s cannons to fire on him and memories of his lost wife, Aric drifts peacefully through space while his shattered helmet subtlety repairs itself a little bit in each panel.

With its quick pacing, an intense script, and eye-popping visuals, X-O Manowar is still a prime example of what makes comics fun to read.  In fact, so far, every Valiant title has been knocking it out of the park. They’ve also taken to printing summaries of the story thus far into the inside covers of their books, which is a fantastic idea and one that I hope they continue.  It’s helpful not only to new readers, but also us regular readers that may need a quick refresher month to month.  Keep an eye out for the debut issue of Archer & Armstrong on August 8th as well as new titles of Bloodshot, Harbinger, and X-O on the 15th & 29th. 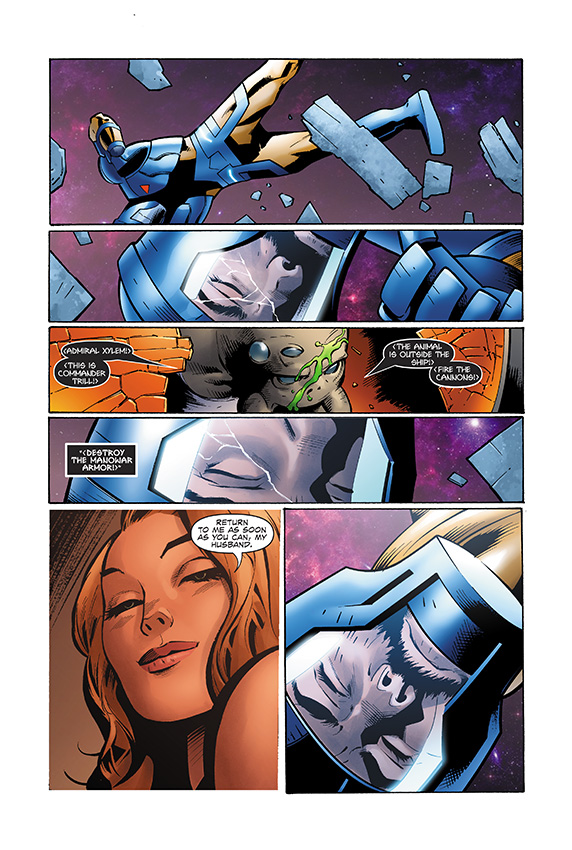 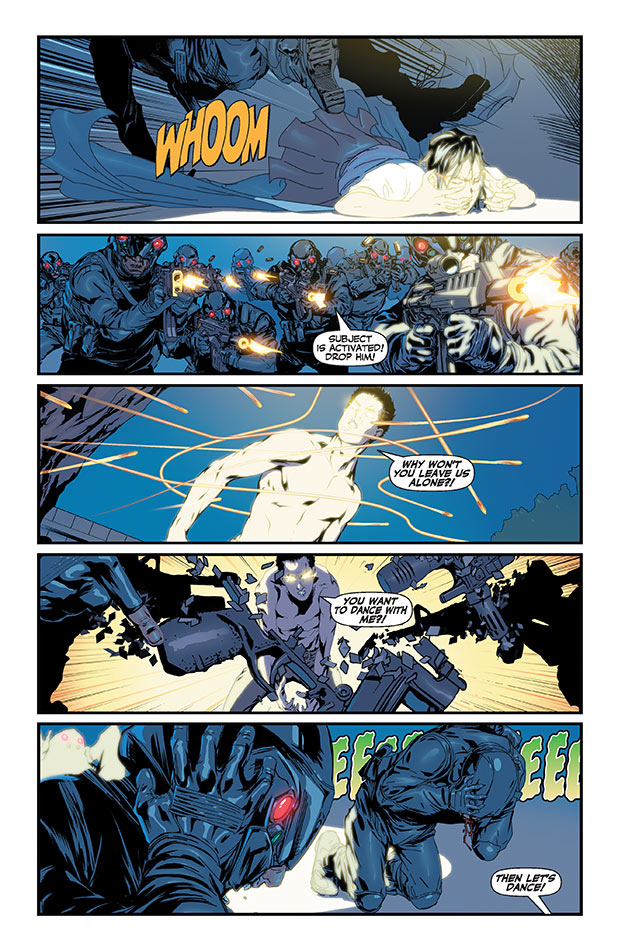 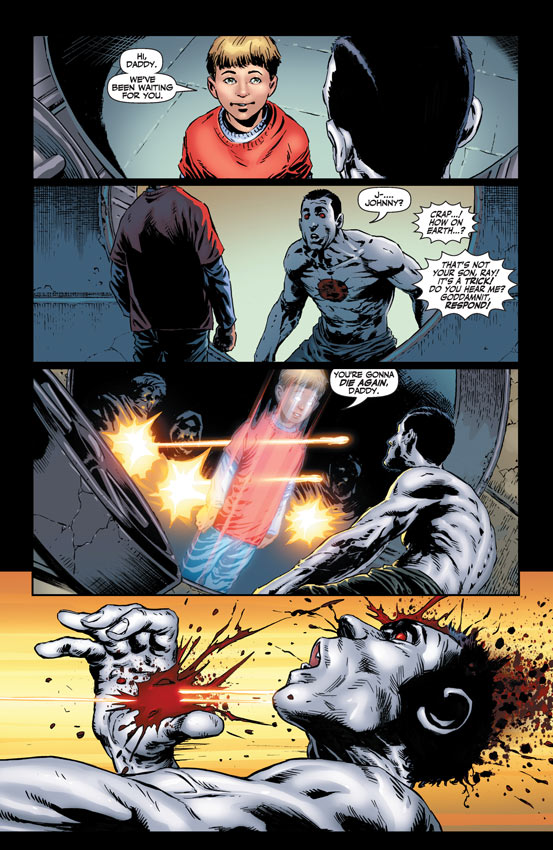