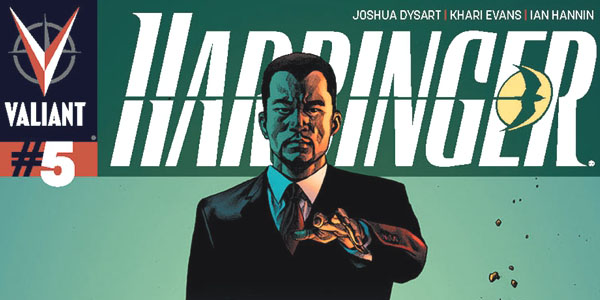 In what will surely go down in history as one of the best weeks for comics ever, we get an amazing issue of Daredevil; Darwyn Cooke’s poignant and stirring Minutemen; and some absolutely brutal, action packed pages of Harbinger courtesy of the unstoppable Valiant. 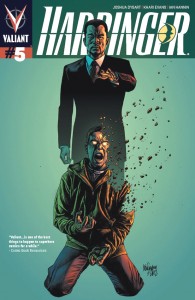 Watching Peter Stancheck completely unravel over the course of Harbinger’s first five issues hasn’t been easy, but it has been seriously entertaining. The work that writer Joshua Dysart has been doing on this book is nothing short of incredible; he has done a great job of painting the characters in various shades of grey and letting his readers decide which are the darkest. The latest issue of Harbinger is an intense culmination of all that has been building up in its first arc, and it’s a doozy.

Last issue left us with a cliffhanger in which Pete finds his best friend Joe — who Harada swore to protect in exchange for Peter’s cooperation with the Foundation — dead from a forced drug overdose. The effect this has on the disillusioned and frail psionic is an immediate snap, one that leads to a ruthless (and ultimately gruesome) confrontation with the ultra-powerful Hidden Moon. Faces, arms and egos are broken in the battle, and the exhaustive pace of the issue never stops for a moment. After a few more epic battles of psionic powers and the reintroduction of a character that I’m faithful will quickly become a fan favorite, the issue ends with a page that will have readers itching for the start of the next story arc, Renegades.

Fans could not have asked for a better climax to the Omega Rises arc. Dysart delivers the tight dialogue and intentionally vague characterization that has made this book one of the very best of the Valiant relaunch. When stripped of his powers, Peter is perhaps the most relatable character of the Valiant universe; he’s just a guy trying to make sense of crazy circumstances, most of them beyond his control. Artist Khari Evans also delivers beyond expectations, drawing and framing each fight scene with the confidence of a great action movie director. Try not to wince when the brutality ramps up in the beginning of the issue, and good luck holding back your grin when Faith literally flies back into the picture.

The next issue of this spectacular series cannot come fast enough, and my excitement for issue #8 is at a fever-pitch thanks to Jeff Lemire’s unique variant cover. 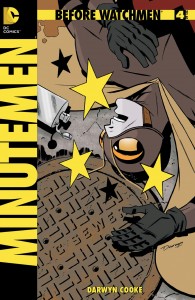 Now that the characters have all been properly introduced and the major events that we saw in Watchmen have been retread, Darwyn Cooke can really start diving into the untold stories of the Minutemen.

The main focus of this issue is the fate of Silhouette, the most enigmatic member of the team and the object of Hollis Mason’s unrequited and confused love. We see how and why she dies, and then how her murderer becomes the target of Sally Jupiter’s revenge killing. Comedian also makes an appearance, where Cooke introduces us to the events in war that shaped Blake’s future with the Watchmen and his overall volatile attitude. On top of all that, Ursula’s past is uncovered and her experiences with the Nazi takeover are explored.

Cooke is really giving his readers their moneys’ worth with this book. There is a ton of deep storytelling going on here, cohesively linking the members of the Minutemen together in unexpected ways. His stylish, simplistic art style and basic panel layouts are still more powerful than the most ambitious of  designs. The characters are more fleshed out and interesting in Cooke’s solo effort than in any other Before Watchmen title, and that’s saying a lot. 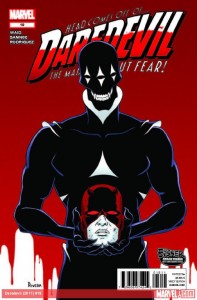 Things come full circle in this issue when the teleporting villain from the first issue of Mark Waid’s reboot returns to wreak havoc on Hell’s Kitchen. As it turns out, he’s been one of the reasons behind Matt’s deteriorating mental state (but not the whole reason, apparently) and he is bent on not only taking down Daredevil but taking over the entire mob. Chris Samnee has nailed the feeling of this book; I can’t imagine how hard it must be to plan out a fight scene with a villain that can exist everywhere and nowhere at once, but he pulls it off amazingly.

The different plotlines involving Foggy’s fragile emotional state, Matt’s mental issues and the false accusation in a mob boss’s murder are all working perfectly together, and there’s no doubt that Waid is building up to some truly huge events.