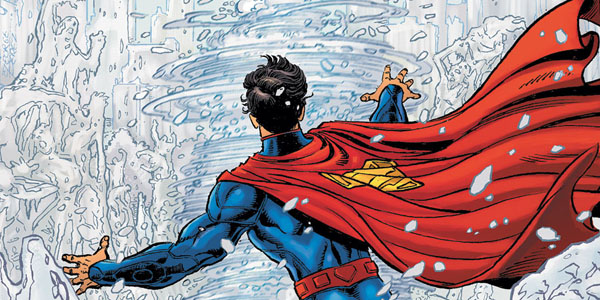 This week’s issue of The Flash really starts with a bang.  Flash (Barry Allen) is using his newly-discovered molecular vibration power to pass a descending airplane right through a major bridge and land it safely in the water below.  Seeing him pass through the floor of the plane while the oblivious passengers say their last prayers is one of the most impressive scenes in the book.  This fantastic rescue is taking place because of the mass blackout that occured last issue which shut down every electronic device within miles.  Flash is attempting to help millions of people at one time, which might not be impossible thanks to his new incredibly fast mind aiding his body, instead of impeding it, for the first time.  Elsewhere, scientist and friend of the Flash Darwin Elias is being handed right over to the enemy in an important scene that only fills two pages.  Barry and his co-worker Patty race to a lab where they believe Barry’s friend Manuel is being held captive for scientific experimentation.  They find him with his hands lopped off but still alive, and their escape from the laboratory ends in a cliffhanger that truly has to be seen to be believed.  The art by Francis Manapul is predictably awesome, conveying every thought going through Flash’s mind with expertly planned panels-within-panels.  Of all the issues so far this month, I’m looking forward to seeing what’s next for this series the most.

While reading this week’s issue of the Dark Knight, I started to wonder why Batman needs so many separate series in the New 52.  I realize that he’s arguably the most popular hero DC has thanks to Nolan’s blockbuster films and his rich rogue’s gallery, but this series in particular does nothing to expand on Batman’s world in any significant way.  The third issue picks up after Batman had followed a Playboy-bunny look-a-like to a train compartment where a beefed up Joker sat on top of some corpses.  It turns out that it was just Clayface acting as the Joker (which is oddly reminiscent of the recent video game Arkham City).  After defeating Clayface, who has also apparently been injected with a drug that grants super strength and then makes him bleed from his eyeballs, Batman is almost injected with his own drug, only to be saved in the nick of time by the Flash.  After Bruce Wayne goes on a date with an all-too-predictable villainous posing as an irresistible sweetheart, he finds out that Poison Ivy must have something to do with the new drug and pays her a visit.  The writing in this series is by far my biggest complaint; the story has nothing to set itself apart from previous Batman stories (even the story for the 2009 game Arkham Asylum, written by Paul Dini, was similar but superior).  The dialogue isn’t much better; it’s bearable at best and cliché-ridden and annoying at its worst.  While the art is distinctive and has some interesting contrast and lighting, the overall art style doesn’t have much appeal.  Much like the writing, it’s simply mediocre.  Unless you’re hell-bent on following Batman through all of his many new adventures, you wouldn’t be missing much by letting this one stay on the rack.

The dynamic between Action Comics and Superman is one of the most interesting aspects of the New 52.  Almost the entire first half the latest issue of Superman is dedicated to giving us a quick snapshot of Superman’s time so far in Metropolis, told mostly through shots from the first two issues of Action Comics, and then continues on to some of Superman’s earliest foes.  This is all being told to the staff of the new Daily Planet by a documentary filmmaker who plans to make a movie exploring whether Superman is a “Messiah or Menace”.  This puts the events of Action Comics into perspective by showing that those events already took place and now we are well into Superman’s future.  The second half of the book shows Metropolis yet again under attack, this time from a giant ice-tornado turning everyone’s entire bodies to ice.  Superman obviously saves the day, but the people of Metropolis are beginning to see that all of these attacks are targeted at him.  The book ends with an interesting revelation that hopefully spruces up a story that, while definitely keeping my interest, hasn’t exactly blown me away.  Between this series and Grant Morrison’s Action Comics, Superman is in a pretty good spot in the New 52.

Aquaman has caught me by surprise.  After the first issue I wasn’t sure what I thought about his reboot or if I would even continue reading it.  Luckily, I picked up the next issue and my interest was piqued enough to continue following it, and this week’s issue really impressed me.  It opens up with a panel (that could easily be a beautiful standalone painting) depicting a flashback of Arthur and his father looking out to sea.  The action then picks right up with Aquaman and Mera fighting off the army of hungry Trench.  After Aquaman is again disrespected (this time a police officer trying to make sense of this new enemy), he and Mera leave with the corpse of a Trench minion to the house of Stephen Shin.  The reception that Aquaman gets from the public is one of the most interesting aspects of this series; people laugh at him and disregard him almost as if he’s crazy.  He and Mera leave Shin’s house after getting the information they needed, but not before Shin says something regarding Aquaman’s trident that might just hint at something big coming for this series.  The book ends with Mera and Aquaman diving down into the homeland of the new enemy, which is strangely the first time we actually see Aquaman in the water.  I would suggest you make like Aquaman and dive into this series if you haven’t yet, as I can tell that some big things are lurking in the deep.