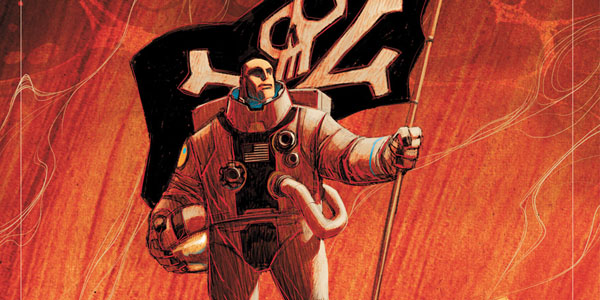 While this was a relatively quiet week for new comics quantity-wise, the quality of some of these books makes up for it in spades.  The best books include an astronaut who only dreams of going to space and a blind hero with a new lease on life.  Keep reading to find out what they are!

If I had to describe this new series by frequent comic collaborators Brian Azzarello and Eduardo Risso in just a few words, I would call it a love letter to fans of science-fiction in the vein of Philip K. Dick.  It has machines and drugs that can instantly alter people’s moods much like those inDo Androids Dream of Electric Sheep? and A Scanner Darkly, and it follows a man (well, sort of) who is trapped in an environment that he does not belong in and who dreams of escape, which is easy for anyone to identify with at one point or another and can describe the basic plot of many of Dick’s most famous stories.  The main character, a Neanderthal-looking fellow named Orson, was genetically engineered by NASA for the specific purpose of traveling to Mars, but for reasons we haven’t been shown yet, he’s stuck on earth collecting trash and dreaming of the life that he was meant to have.  He and all the humans he comes across speak a strange dialect of English in this bizarre vision of the future, where NASA had been left to its own devices for decades and they decided to play God, only to be shut down completely soon after.  Instead of laughing, the people say “LOL” and instead of “think”, they say “brain”.  It’s not hard to see the social and political commentaries running rampant through this book (again strikingly similar to Philip K. Dick and a staple of great science-fiction).

The second issue picks up with Orson getting in way over his head and trying to rescue a reality show starlet from her kidnapper, who plans to sell her to a “sheiky man” who pays big bucks for little girls.  We learn a bit more back-story that fleshes out this strange future world a little better and we also see that Orson might not be as stupid as he looks.  This is only the second issue of nine, and it has already exceeded my lofty expectations for a writer as gripping as Azzarello.  Because of the unorthodox language and fast-paced narrative, it takes a couple of reads to fully understand what’s being said and exactly what is happening.  Just like any great science-fiction story, you always find something new on subsequent reads.  The art represents what I’ve come to expect from Eduaro Risso; often rough and lacking detail, but full of distinctive charm and a suitable drab color palette that perfectly represents this bleak imagining of Earth.  If you’re a fan of sci-fi or Azzarello (but especially if you’re a nerd for both!) for the love of all that is holy, pick this book up! 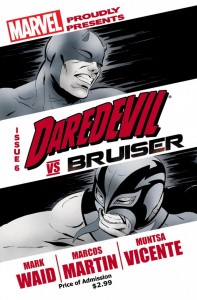 Until recently, the only image my mind could conjure up when I heard about the handi-capable hero Daredevil was Ben Affleck in that godawful movie from a few years ago.  Thankfully, per the recommendation of my brother, I picked up the first five issues of the new Daredevil series written by Mark Waid.  So far, it’s been a fantastic new take on the man without fear, focusing equally on his strengths as lawyer Matt Murdock as on his radar-like senses and physical prowess.  This week’s issue sees our hero submerged in the ocean after being thrown off of a boat by NASCAR racer/pro wrestler and all-around muscular villain called Bruiser at the end of the last issue.  Daredevil grapples onto the fleeing watercraft using his multi-purpose walking stick and soon finds himself in a meeting room with dangerous representatives of five of the world’s most corrupt and powerful organizations, Hydra among them.  After rescuing his client from certain death, Daredevil learns of the meaning behind this get-together and uses his logic and reasoning skills to walk away from a sticky situation unharmed and carrying an interesting new device that could (and probably will) cause him plenty of trouble in the future.

Although the plot could easily slip into dark and brooding territory, Waid keeps it pretty light and, more importantly, really fun.  There is a great sense of humor running through these pages (there was even a 30 Rock reference on the first page of issue five!) and the characters are all extremely likeable, especially Murdock’s business partner Foggy who is one of the best supporting characters I’ve seen in a comic.  There hasn’t even been one mention of “blind justice” in all six issues, which must be pretty hard to avoid seeing how our hero is blind AND has a penchant for delivering justice.  If that alone doesn’t show off Waid’s capability of keeping the character fresh and original, I don’t know what can.