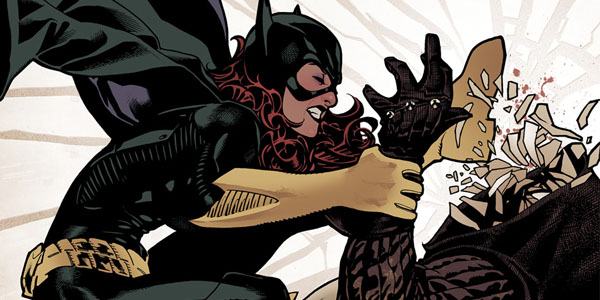 The holidays are upon us, and what better way to get in the Christmas spirit than to celebrate with some of the Bat-family?  This week we’ll check out the fourth issues of Batwoman and Batgirl as well as the new graphic novel Batman: Noel by Lee Bermejo.

After the relatively uneventful previous issue, Batgirl #4 picks up the pace and concludes the storyline involving the Mirror.  After being really invested in the new villain whose mask is a one-way mirror and whose modus operandi is killing people who should have died but where somehow spared, I couldn’t help feeling a little disappointed to see him go.  This issue could easily be enjoyed by someone who hasn’t read the previous three issues as Batgirl effectively sums up everything about the villain in a few monologues.  The method Batgirl used to defeat the Mirror, while somewhat contrived, was a fitting end to an interesting and troubled villain.   The artwork by Adrian Syaf is reliably excellent, with the most gripping images still being the character’s incredibly expressive eyes.  I noticed a few odd-looking proportions and poses, but nothing that detracts from the narrative in any way.  Writer Gail Simone is really holding out with the details about Barbara’s miraculous recovery, as we have been teased with references in almost every issue but never really told anything.  It’s a great way to keep the fans coming back for more, and even though the cliffhanger that ended this issue wasn’t exactly mind-blowing, I’ll be looking forward to the next issue.

Batwoman is among the most risqué of the New 52, along with the borderline soft-core porn that is Catwoman.  It’s all handled with much better taste in the pages of Batwoman though, as the first few pages of the newest issue are composed of black-and-white images of Kate Kane and her investigator girlfriend in bed together placed over a scene of Batwoman’s ex-sidekick Flame-bird getting knifed.   The juxtaposition of the two totally different scenes and art styles is pretty effective.  The rest of the issue involves Batwoman doing some investigating into the ongoing case of the missing children and the shady government organization led by agent Chase trying to track down Batwoman and learn her identity.  There are many different layers to the narrative in this series and they’re handled efficiently by writers J.H. Williams III (who is also in charge of the incredible artwork) and W. Haden Blackman.  As a side note, some interesting decisions were made in the layout of this book; namely, all of the advertisements are saved for the end of the issue so they don’t break up any of the meticulously laid-out scenes.  It makes the book feel awfully short but it also keeps the narrative flowing.  I’d surprised this tactic hasn’t been used more often.

What do you get when you mix together Charles Dickens’s timeless holiday tale A Christmas Carol with the seedy world of Batman, written and drawn by the ultra-talented Lee Bermejo?  Well, you end up with Batman: Noel, and new graphic novel that explores Batman’s past, present and future in a strange but satisfying way.

In the first few pages the scene is set and we see a Gotham City with snow-covered rooftops and smoke rising from every chimney.  Batman is chasing after a regular guy named Bob (not Bob Cratchit, just Bob) who is making ends meet for him and his little boy by working for the Joker.  Batman stops the delivery short and returns to the Bat-cave, where his sickness-induced visions start to haunt him.  Without giving away too much of the story, we get to see a variety of Robins, Catwoman, Superman, and many more colorful characters from Batman’s life.  This isn’t an action-packed story full of fisticuffs and smashed faces.  The story is just as much about the supporting cast in Batman’s world and the way they perceive and interact with him, much like Scrooge’s discoveries in A Christmas Carol.  It’s a reflective trip through Batman’s past, present and future and it forces Batman to really look at himself and see what he will be remembered as; a hero or a masked vigilante who did more harm than good?

Even though the story is gripping and will probably force you to finish the entire book in one sitting (it was one of the quickest reads I’ve ever encountered), the art is the real reason to own this book.  If you’ve read the 2008 graphic novel Joker, written by Brian Azzarello and penciled by Bermejo, you already know the captivating artwork he’s capable of.  With Batman: Noel, it seems that he’s stepped up his game even more.  Every single page is a beautiful piece of art and I found myself lingering on certain scenes long after I finished the text, just to pick out every detail.  The amount of actual text can be fairly scant throughout the book, which is really a testament to Bermejo’s talents as a visual storyteller.  It’s also worth mentioning the amazing work of colorist Barbara Ciardo managed to make everything look almost photorealistic with her color choices and lighting techniques.  I hope these two continue to work together, as their styles perfectly complement one another.

I highly recommend this book to anyone looking for a slightly different take on the Dark Knight.  It could even make a great gift for any Batman-loving family member this holiday season.