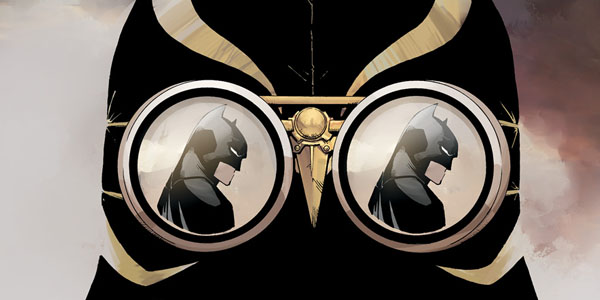 Thanks to the approaching holiday looming over me like Bane, wanting nothing more than to break my wallet forever, I had to choose my purchases carefully.  In a week with many big titles, this was no easy task.  Read on to see which titles are most worth picking up!

This week, writer Mark Waid surprises us with a Daredevil story totally unrelated to last issue’s big brawl and subsequent revelation that Daredevil is now the most dangerous man on earth.  Instead of fighting crime, Matt Murdock is struggling to get a bus full of blind children into the Christmas spirit.  After the bus crashes in spectacular fashion, Matt is forced to struggle through the snowy Catskill Mountains with eight terrified little kids.  What follows is a heartening tale of survival against the odds and the amazing kindness that can arise from humans, young and old alike, even when placed in the worst possible conditions.  It wasn’t at all what I was expecting from the book, especially given Daredevil’s new status and the fact that he’s probably being constantly hunted down by the biggest crime organizations the world over.  Fortunately, it was still a worthwhile read and it really showed the heart in the character of Matt Murdock, proving that he can be just as much of a hero inside or outside of the costume.

The art by Paolo and Joe Rivera is predictably great, giving off a really classic vibe while also infusing the book with some really cool effects, like showing us what Daredevil “sees” while using his other heightened senses to make out his surroundings.  My favorite scene in the book is a flashback to a Christmas party where Matt is wearing devil horns and a red sweater that says “I’M NOT DAREDEVIL” in big letters.  The creative team is seemingly having a lot of fun showing how Matt is dealing with everyone knowing his secret identity, and it’s fun to read as a result.

Brian Azzarello seems bent on re-defining Wonder Woman and turning her into a much more modern interpretation of the Amazonian Princess and daughter of Zeus.  The result is an intense and brooding character who is trying to find her place in the world and come to grips with the fact that she has been living a lie her whole life.  This latest issue has three distinct set-pieces, all of them interesting and important to the plot.  One involves the conflict between Diana and her recently-discovered sister Strife, which is sure to come up again in a big way.  Meanwhile, Queen Hera is confronting Hippolyta about the recent fling she had with Zeus (which Hera is not happy about).  Finally, we get to see Ares in the flesh and the return of Apollo from the first issue who leave the book off on a powerful note.

It’s really interesting to see Azzarello, who is perhaps best known for writing human characters with no real powers, write characters from Greek mythology and inject his distinct modern sensibilities.  I’ve never been into Wonder Woman before the re-launch, but this series has made me a fan, and the fantastic art by Cliff Chiang is only helping matters.

We’re now well into the controversial new run of Ultimate Spider-Man, in which an African American, inner city kid named Miles Morales obtained spider powers and took up the mantle of Spidey after Peter Parker’s death.  As soon as he donned the Halloween costume and took to the rooftops, he was confronted by Spider-Woman who was mighty pissed about his immediate adoption of the role.  This is where issue five picks up, and after Miles is brought in to be examined by some of the Avengers, we’re treated to a totally predictable villain escape and quick defeat at the hands of – you guessed it – Miles.  He saved the life of the other Avengers and Nick Fury decides to give him his own suit and one shot at being Spider-Man.

I’m a huge fan of Brian Michael-Bendis’s run on Ultimate Spider-Man when Peter Parker was still around, and I was expecting something truly great from this reboot.  While the first few issues did a respectable job of establishing the characters and their world, this issue was entirely predictable and colorless.  Maybe it’s because he hasn’t been in any circumstances that could really separate him from his predecessor, but when he’s in costume Miles feels like a less funny Peter who can somehow turn invisible.  I’ll give it a few more tries before dropping it from my radar, but this latest issue of Ultimate Spider-Man left me wanting so much more.

Scott Snyder is taking a big risk in the latest issue of his Batman run.  He’s suggesting that all we have come to know about Bruce’s parent’s deaths and even Batman’s origin story could be false.  Bruce explains to Dick Grayson that ever since he was a child, he has been investigating the Court of Owls on the suspicion that they were responsible for the murder of his parents, and not some regular crook named Joe Chill.  He based this suspicion on an owl nest in the attic of Wayne Manor that he took as a sign from the Court of Owls.  I personally found that angle a bit perplexing, but I chalked it up to him being a child recently rattled by his loss and not really being able to think logically.  We see Bruce doing his very first bout of detective work as a young kid in a beautifully drawn flashback, which really shows Greg Capullo’s versatility as an artist.  The most interesting aspect of this back-story is that it shows Bruce’s early obsession with the Court of Owls, which draws a clear parallel to that of his great-great-grandfather.  That obsession ended up killing Alan Wayne, and Bruce has already had a few scrapes with death during his recent investigations.  The issue ends with the kind of cliffhanger that we’ve come to expect from Scott Snyder, and as usual I started looking forward to the next issue the second I finished this one.