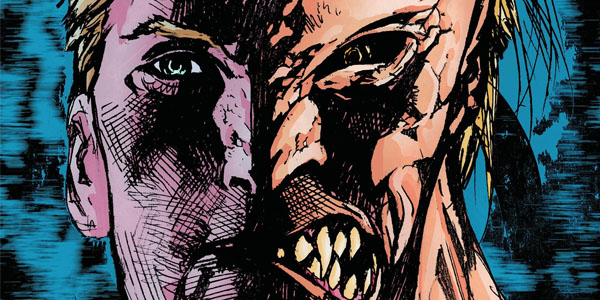 This was a strong week for new comics, with dark and disturbing stories abound.  Find out which of them are most worth picking up…if you dare.

Animal Man has been getting exponentially more disturbing with every new issue.  The latest issue crisscrosses between Buddy Baker and his daughter (who is to be the avatar of the Red when she is a little bit older) and Buddy’s wife and son who are being driven to safety by one of their enemies.  While in the Red, Buddy learns what the monsters that have been chasing his family are (the Hunters Three), and what exactly they want with him.  These hunters are trying to corrupt Maxine and use her powers for their dark intentions, namely destroying all of humanity from the inside out.  It’s an interesting twist on the typical hero formula; the actual Animal Man is taking a backseat to his daughter’s already superior powers and it’s clear that he is completely unprepared for such a big war.  It’s easy to relate to Buddy because he seems to be along for this crazy ride just as much as the reader.  Elsewhere, Buddy’s wife and son are facing their own problems and the issue ends on an incredibly shocking and upsetting note.  It is also worth mentioning that this issue finally marked the beginning of the Swamp Thing/Animal Man crossover that writer Scott Snyder has been hinting at, although the mention was very fleeting.  Look forward to that in the issues to come.

The visuals in the book, while easily some of the most unique and effortlessly disturbing drawings I’ve ever seen (courtesy of Travel Foreman), are also a little bit jarring.  The pages switch, for no apparent reason, between rough sketches with little to no touch-ups to more conventional art with clean lines and an overall more “shiny” appearance.  It isn’t a problem so much as a slight annoyance, but I have to admit that it pulled me out of the story a few times.  That’s a shame, because Jeff Lemire’s story is one the most bizarre and unpredictable I’ve ever come across in a comic.

If anyone were to tell me that comics aren’t as effective a storytelling medium as movies or novels, I would show them Penguin: Pain and Prejudice from writer Gregg Hurwitz.  I have already learned more about Oswald Cobblepot in these three issues than I have in any of his supporting roles in so many Batman stories.  Hurwitz has really turned this villain into a compelling character in his own right.  One minute we feel sorry as he is taunted and bullied in school for looking so strange, and the next we’re horrified as he meticulously destroys a man’s life by murdering all of his loved ones.  This latest issue continues to walk that fine line when he sees a blind woman and immediately seizes the opportunity to find a partner who won’t judge him by his looks.  There is a powerful scene where his new love tries to touch his face and “see” what he looks like and he turns away, ashamed and bitter (which is perfectly conveyed in the emotive and very cinematic art style of Szymon Kudranski).  Those human elements afforded to the Penguin really make this book stand out in a sea of villain-based miniseries (there will only be 5 issues of this one).  The intense love that Oswald had for his mother contradicts his heinous acts of crime and it’s impossible to predict his behavior.  Batman has only appeared briefly so far in the series, and it’s all the better for it.  This is an intense look into the life of a complicated and troubled man, and I can’t look away.

I might be way off base here, but I was hoping to see Batman do some actual detective work in Detective Comics.  This book has all of the necessary ingredients for an entertaining Batman story: an interesting new villain, plenty of fights and explosions, and Jim Gordon getting his kidney stolen.  The only thing it’s missing is Batman actually using his high-tech devices and high intellect to solve crimes and gain a better understanding of his adversaries.  The fourth issue opens up with Batman fighting off a bunch of parts is parts Jokers, all while his wrists and ankles are bound by wire.  This was all arranged by the Dollmaker, a maniac who buys and sells bodies to create works of art with, to show his prospective buyers that it is indeed the real Batman whose body might be mounted to their wall later on.  Not surprisingly Batman escapes and punches some people in the face but lets his real targets, the Dollmaker and his bizarre female accomplice, get away.  The issue wraps up with a long-awaited reference to the face that Joker had someone cut off of him in the first issue, but not much is said about it.

Tony Daniel’s art is impressive as always, especially taking into account that he writes and draws every issue.  Unfortunately, it can’t quite redeem the decidedly lackluster story going on.  It’s still a much more entertaining read than The Dark Knight, but it can’t quite measure up to Snyder and Capullo’s current Batman run.

The whole concept of the Green (organic plant life), the Red (the world of flesh) and the Rot (corruption of flesh) is an incredibly cool storytelling device.  While Animal Man deals with the Red, Alec Holland is being called upon by agents of the Green, former Swamp Things, to take up the mantle and become the Swamp Thing once again and save the world.  All he wants is a normal life, any hope of that was taken away as soon as his former love, Abigail Arcane, came into the picture.  The fourth issue starts off with a highly disturbing scene in a small-town diner where Abigail’s sinister brother William is wreaking all sorts of disgusting havoc.  We learn even more about the Green and the Red through some elegantly laid-out pages that perfectly convey the juxtaposition of the two worlds.  After Alec once again defies orders from the Parliament of Trees, he continues his quest into the desert alongside Abigail, who just might be his mortal enemy.  The way Scott Snyder can balance such a large-scale story with small events like Alec desperately trying to make sense of his life is really admirable.  The art by Marco Rudy is also something to behold, as almost every panel is designed to look organic and flowing or crimson and flesh-like, depending on what is being explained within.  The book is really picking up on the horror elements and it’s clear that Snyder is really invested in this world, which can only mean great things are on their way.