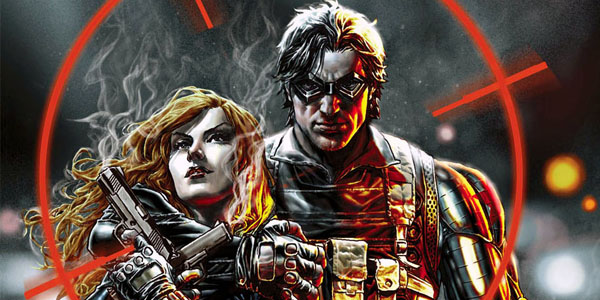 Any week that gives us Daredevil, Batman and Spidey all at once is fine by me.  This week in particular was rife with quality storytelling and visuals from some of the top talent in the industry.  Keep reading for all the details! 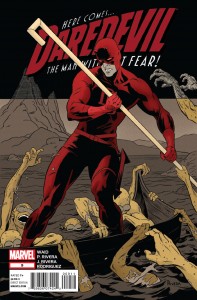 Daredevil returns to the pages of his own book sans Spider-Man and descends into a bizarre subterranean world where the Moloids are carrying around stolen caskets, one of which belongs to Matt’s father.  Our hero soon figures out that the mysterious Mole Man is the recipient of all the corpses and catches him in the act of breaking them open one-by-one, clearly searching for someone special (and dead).  A fight ensues in which Daredevil is swiftly bested and thrown down a pit.  Meanwhile, Black Cat is following through with her deceitful bargain and robbing Murdock’s apartment of the most valuable device in the world.  Once again, Mark Waid managed to write a criminally fun and intriguing issue with humor and action abound.  The story is flowing incredibly well from the recent Spidey/Daredevil crossover and all of the plots are occurring separately without any confusion.  Paolo Rivera also delivers yet again, penciling some of the best art available in any book on the stands.  His interpretation of how Daredevil can “see” his surroundings never fails to impress. 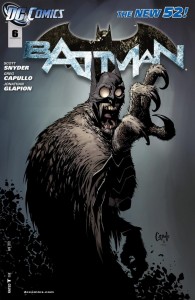 I take back what I said about Buddy Baker from Animal Man being the most unfortunate comic book character.  Batman stole that honor after last month’s mind-melting issue where he was destroyed emotionally and psychologically and then stabbed through the gut by the Talon.  This issue improves his luck a little bit while also giving us our first glimpse of the actual Court of Owls, which is made up of malnourished and vicious humans with awfully pointy appendages.  This issue also marks the first time that I’ve found a small bone to pick with Scott Snyder’s storytelling.  I realize that Bruce Wayne is the pinnacle of human fitness and endurance and that his suit can handle just about any physical battering, but he was beaten within an inch of his life, impaled through the stomach and then beaten some more and he came back from all that faster and stronger than before.  It almost makes his mental and physical breakdowns that have occurred over the last two issues seem…insignificant.  Luckily, a lifetime of reading comics has taught me to utterly suspend disbelief and enjoy the other elements of the story, which there are many of.  The fact that there are countless more Talons waiting to be awakened is a terrifying prospect and one that Snyder really pulled off well, making us focus on only one for so long.  Finding a complaint about Capullo’s art is quite simply impossible.  His style couldn’t be a better fit for all the disturbing stuff coming from Snyder’s mind and his dynamic fight scenes remain some of the very best around. 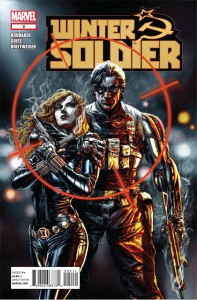 Brubaker’s Winter Soldier picks right up from last issue’s ending shot of a machine-gun toting (and jetpack wielding!) gorilla with his sights set on Bucky Barnes and Black Widow.  After losing sight of the stasis tube containing one of the frozen super-soldiers, the pair returns to base and learns the identity of the three missing Project Zephyr soldiers, one of which has already been awakened and has been used in a plot to essentially piss off (but not kill) Doctor Doom.  Meanwhile, in Prague, Nick Fury is going all Jason Bourne on the man in charge of auctioning off the activation codes for the super-soldiers on the black market.  The similarities to the Bourne books and films don’t end there – the action scenes are basically the static image equivalent of the shaky handheld camera work found in those movies, meaning simply that it’s really tough to figure out what’s happening most of the time.  Butch Guice’s art is usually excellent and appropriate for this kind of tale, but when the action ramps up after Bucky and Natasha infiltrate the illegal auction, I found it hard to really discern who was hitting who.  The ending of this issue certainly grabbed my attention enough to continue following this comic.  It really stands on its own as a complex but satisfying tale of espionage and globe-spanning political conspiracy. 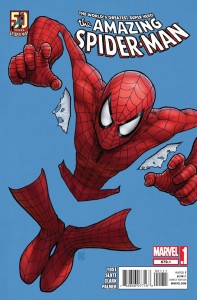 Spider-Man returns this week with a .1 issue (basically meaning an issue that starts a brand new storyline and is therefore safe to use as a jumping on point).  The book, written by Dan Slott and Chris Yost, actually takes place weeks before the events of last issue, during Spider-Island.  Everyone at Horizon Labs is busy trying to find a cure for the strange epidemic that gave everyone in NYC spider powers, but a mysterious employee seems to have other plans.  Enter Michael Mobius, the living vampire.  He has been trying to create a cure for himself, but when he gets a whiff of Peter’s blood he’s back on the fritz.  He and Spider-Man do battle, along with fellow Horizon employee Uatu Jackson, who was somehow amply prepared to fight a vampire.  As is par for the course, Spidey ends up causing a SNAFU and Mobius escapes the lab, only to meet up with another very familiar villain down in the sewers.  Slott writes a really enjoyable Peter Parker and his inner monologues contain just the right amount of cheesiness to be funny.  It was refreshing to see a more scaled-down Spider-Man story happening this week and the more traditional penciling from Matthew Clark was a welcome change from Humberto Ramos’s sometimes overly cartoonish visuals.