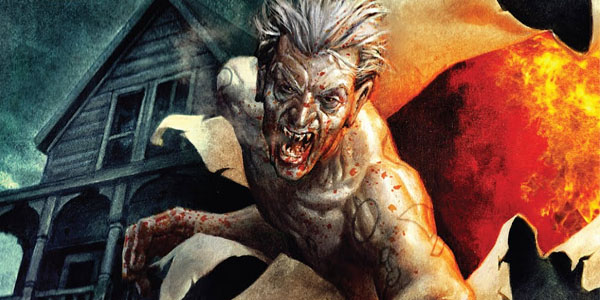 Another Wednesday means another trip to the comic shop.  Will Penguin’s plan to launch a massive attack on Gotham soar, or will fail to take off like a certain flightless bird?  How will Batgirl fare against her new mind-controlling enemy?  These questions and more are answered inside, so keep reading! 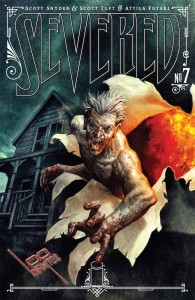 Scott Snyder and Scott Tuft have created a tense and gripping narrative in their original indie horror comic Severed.  The plot of the seven-issue miniseries revolves around a sadistic and cannibalistic murderer of children and the lengths he goes in obtaining his prey.  A young man named Jack Garron runs away from home to find his long-lost father.  Unfortunately for him (and even more unfortunately for his short-lived lover Samantha), the man writing Jack the letters is the child-eating freak carrying out an elaborate trap.  The final issue of the miniseries ends with the cinematic and intense showdown between Jack and the killer.  The only thing that pulled me out of the story was the complete disregard for any sort of realism; when Jack (SPOILER ALERT) gets his arm lopped off in a basement, he’s totally fine mere minutes later and seems unaffected by massive blood loss and, well, missing an arm.  Looking beyond that quibble, I found the book to be a satisfying ending to a legitimately scary and at times unpredictable story.  The art by Attila Futaki stands out for its realism and ability to convey the terror in the character’s faces, and Greg Guilhaumond’s colors add another layer to the dark and twisted world of the comic. 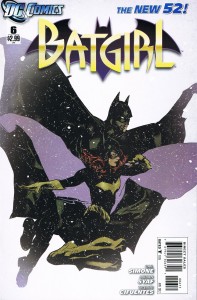 When a comic ends with Batgirl about to have her face demolished by Bruce Wayne brandishing a crowbar, it’s impossible not to be excited about the next issue.  This week’s Batgirl is that issue, and while our hero’s face remains intact, plenty of excitement can still be found in its pages.  Last issue introduced Gretel, a new femme fatale who could control the minds of ordinary people with the strange code 338.  We get to delve much deeper into her backstory this time around, discovering that she became a villain after her brush with death at the hands of a mob boss and her subsequent quest for revenge.  Barbara uses her super-intellect to presumably do a Google search and finds the identity of Gretel, formally known as Lisly Bonner.  The final face-off between Gretel, Batgirl and Batman held my attention firmly and showed a lot of character development in a short time.  We see that Gretel just wants her life to be over because the pain of her previous trauma is too much to bear, something that Barbara Gordon (and even Bruce) can relate to.  The difference is that they overcame that pain and became the heroes that they are because of it; a nice introspective observation of the characters that has become Gail Simone’s staple. 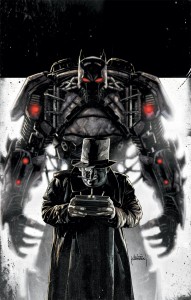 This week marks the end of Greg Hurwitz’s excellent miniseries focusing on the Penguin.  This fifth and final issue is not only the best of the entire miniseries; it’s one of the best comics involving Batman that I’ve ever read.  It begins with another intensely personal scene between Oswald and Cassandra where the latter finally overcomes her self-confidence issue and shows Oswald her eyes, something she’s never done for anyone before.  Oswald gives her a precious gift in return, and minutes later he’s attacking Gotham with giant flocks of birds reminiscent of Alfred Hitchcock’s masterpiece.  Batman soon intervenes and we see some cleverly laid out panels that show just how fast and efficient he is at using the shadows to take guys out.    A few more shocking twists and turns and the issue is over, finishing out with an interesting cliffhanger.  This series has turned the Penguin into a much more complex and sinister villain than has ever been seen before, and I’m sad to see it end.  Since Hurwitz will be taking over writing duties on the Dark Knight though, I wouldn’t be surprised if the Penguin was to return in that book.  Don’t wait until the trade collecting this miniseries gets released…get your hands on this comic now! 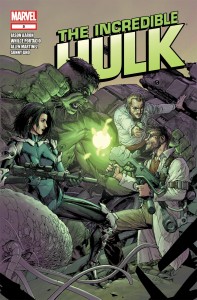 This week’s issue of Jason Aaron’s Incredible Hulk finally reveals how Banner and the Hulk were separated, and also develops the Hulk further as his own character.  It turns out that during the separation (which was carried out by Doctor Doom of all people), Hulk could have chosen to make Banner a complete moron and thus avoided all of the craziness that it currently happening, but he chose instead to split everything evenly.  Back in the present day and on the godforsaken island of misfit experiments, the Hulk is battling more of the human-animal hybrids while the rest of his team tries to deal with Banner, who has become a gaunt and cruel lunatic with extreme tunnel-vision.  This series is really getting better with every issue and Aaron’s impeccable dialogue makes it a joy to read.  More will be divulged next issue about the Hulk’s fateful deal with Doom.  Whilce Portacio does a fine job in the art department as well, bringing the strange characters and tropical setting to life with a deft hand.