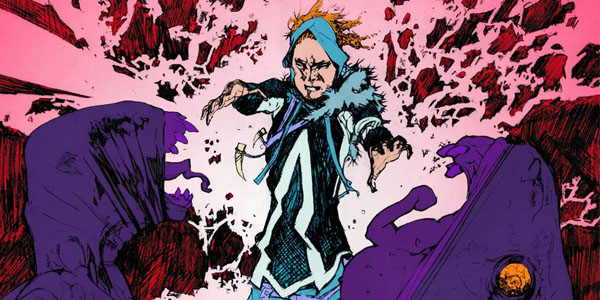 March is off to an incredibly strong start with this week’s comic line-up.  Among Swamp Thing’s triumphant return, Spider-Man’s continued shenanigans in space and the new DC logo, there was plenty to like (or in that logo’s case, to be pretty ambivalent towards).  Read on to find out exactly what made this week so awesome! 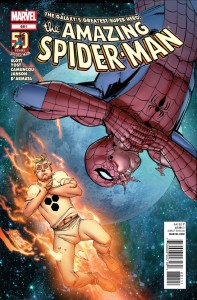 Just last week we watched as Spider-Man and the Human Torch defied all laws of physics (and reason) by rocketing up to space at a moment’s notice to save J. Jonah Jameson’s son from a sabotaged space station.  After the requisite amount of snappy banter between Spider-Man and Johnny Storm and a series of SNAFUs, Spidey hatches a plan that might just save their lives from a ship full of octo-zombies and a lack of oxygen.  A sickly Dr. Octopus, the mastermind behind all of this chaos, shows his face in a scene oddly reminiscent of Dr. Robotnik from the Sonic the Hedgehog games (he actually says at one point to Spider-Man, “You’ve meddled in my plans for the last time!”).  Whether that was an intentionally over-the-top moment or not, I couldn’t help but crack a smile.  Spider-Man manages to save the day with lots and lots of magnetic webbing and Octavius’s plan is foiled, but if the last page of this issue is any indication, it looks like he still has something significant in the works.  This issue continued the recent trend of Amazing Spider-Man books where witty repartee almost takes precedence over an actual story, but I would be lying if I said it wasn’t fun to read. 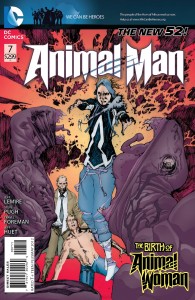 This week’s issue of Jeff Lemire’s Animal Man narrows the focus back down to Buddy and his family, which was a welcome change of pace for one of DC’s most intense and deep properties.  The Baker brood is making its way towards Louisiana to meet up with Alec Holland, going on the advice of Socks, the powerful avatar of the Red and adorable talking cat.  There’s a touching moment between Buddy and his son and a totally awesome dream sequence that that introduces Animal Woman (Buddy’s daughter Maxine).  No giant revelations in this issue, but for a story that has been moving at a furious pace since the beginning it’s hard to complain about a momentary lull; especially when even a relatively calm issue is this great.  Original artist Travel Foreman penciled the first and last few pages of the issue, which whetted my appetite for more of his highly unique work. 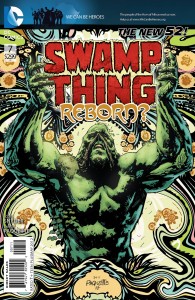 Things weren’t exactly looking up for Alec Holland at the end of last month’s issue when a chainsaw was thrust into his spine, but this issue serves as a complete rebirth in many ways.  As Alec dies, he talks with the Parliament of Trees one last time and finds a way to make the all-important transformation into Swamp Thing.  The issue switches between a group of rot-infested humans, known as Sethes, tearing away at Alec’s protective organic shell and scenes depicting Abigail being carted away to her rightful home among the rot, all laid out in stunningly gorgeous fashion courtesy of Yanick Paquette.  It cannot be overstated how awesome this entire issue looks.  Images of decaying flesh and disembodied heads of the rot meld with swirling vines and vegetation of the Green with flawless artwork and panel layouts.  Of course, Scott Snyder’s writing also delivers in every way imaginable.  Alec Holland is trying to balance wanting to save the world and wanting to rescue his love from her inevitable fate, and those two things are mutually exclusive; basically, it comes down to one or the other.  The Swamp Thing emerges at the end of the issue and shows his immense power right off the bat, while also showing that he isn’t the same monster as before.  This was by far the best issue of Swamp Thing yet and I have no doubt that Snyder is just getting warmed up. 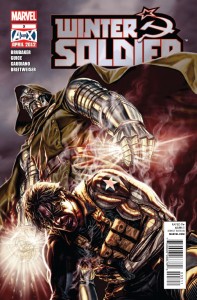 Bucky Barnes and the Black Widow continue their globe-trotting search for the black market buyer of the three remaining Winter Soldiers in this week’s issue of Brubaker’s new series.  We learn more about the mysterious half-woman-half-cyborg who has been working with Ivan Kragoff (the Red Ghost) and how she plays into the whole complex web that’s starting to weave together.  The action barely lets up, as Bucky and Widow infiltrate Dr. Doom’s residence to try and warn him of Kragoff’s plan to frame him in the killing of, as it turns out, a member of the United Nations by using one of his very own Doombots.  The scale of the story is growing at a satisfying rate and it always moves at a quick pace.  The art by Butch Guice took a few issues to get used to, but it’s become some of my favorite artwork of any book out there; the realistic penciling and sparse colors suit the military-themed narrative incredibly well.  Any fan of Brubaker’s Captain America run and fans of military espionage in general would undoubtedly love this book.