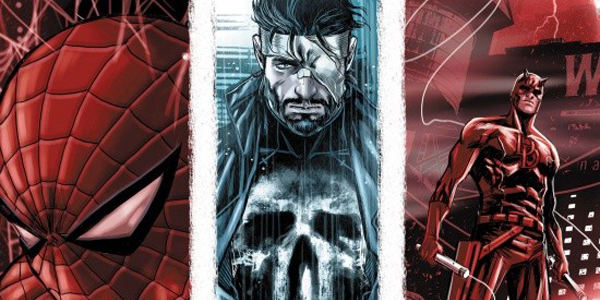 The Night of the Owls has begun in Gotham City and the battle between the Avengers and the X-Men rages on while Daredevil, Spider-Man and The Punisher are still criss-crossing each other’s books.  It’s a crazy week in comics. 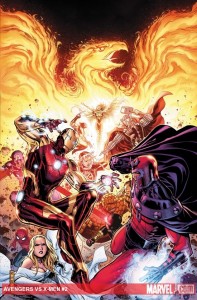 The writers of AvX have wasted no time in pitting the two teams against one another, making it all the more clear that this series is dedicated to only one thing: tons of huge action.  The Phoenix Force still barrels inevitably toward earth (which was shown in a really entertaining way in this week’s Wolverine and the X-Men #8) and Cyclops is still acting incredibly brash.  Basically, not much has changed from last week.  The only things that this second “round” introduced are strange little blurbs that describe who’s fighting and why. “Irradiated muscles strain.  Organic metal groans.  Windows shatter miles away.  The San Andreas fault shudders with each blow.”  They all carry this heavy-handed style and don’t really serve a purpose.  John Romita’s Jr.’s art perfectly conveys all the punching, kicking and exploding going on and doesn’t need the added text explanations.  The script though, penned by Jason Aaron, still shines and makes the book a blast to read.  A sense of humor permeates the pages and shows that, luckily, the writers aren’t taking this series too seriously.  Seeing Cyclops’s visor get increasingly dented and eventually flattened by Captain America’s shield as their fight gained in intensity was a highlight.  The story itself is also picking up steam, with Hope starting to become more and more affected by the Phoenix as it approaches the planet.  With still ten issues to go, I commend the writers for starting with a huge bang and offering fans exactly what they want from the outset: lots of large-scale mayhem.

The AR features in this issue are very similar to the first.  A few panels offer the original sketch-to-final product sequence (which is still awesome as far as I’m concerned) and character bios on Magneto and his son Quicksilver.  If you haven’t downloaded the free app yet, I would recommend it.  The technology works fairly well and it does offer some cool content that you just can’t see anywhere else. 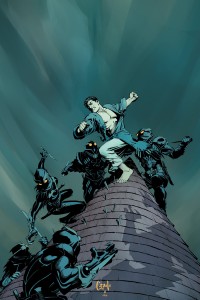 What started as the original villain in Scott Snyder’s New 52 Batman run has turned into a massive event that will encompass ten different books in the DCU.  The Night of the Owls officially begins in the pages of this week’s Batman and continues through next month.  This issue was more or less the comeback of Bruce Wayne after he was emotionally and physically battered for the last few issues.  The Court of Owls has begun its descent on the Wayne Manor and all of Gotham, killing off most high-ranking city officials.  Capullo’s use of light and shadow in this issue was especially effective in giving off the classic horror movie look that the plot supported.  I couldn’t help but wonder how a gaunt-looking Bruce managed to so easily dispatch a massive horde of Talons when he had so much trouble with just one of them in the earlier issues, but it was undoubtedly nice to see him have the upper hand.  After using one of the props in the Batcave to cleverly dispatch a Talon (not the giant T-Rex, unfortunately) Alfred and Bruce locked themselves inside a vault, from which mech-suit Batman later emerged.  The second half of the book contains a great supplement to the main story, this time drawn by Rafael Albuquerque.  I do have one tiny complaint about the visual aspect though; why was Alfred drawn having so much hair?  It might be nitpicky, but we’re so used to seeing him almost bald that all of a sudden seeing him with a full shock of hair really throws things off. 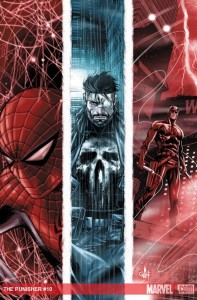 I’ll basically read anything with Daredevil on the cover, and this month has had at least one book on the stands every week featuring the blind hero.  This week the Omega Effect shows up in the pages of The Punisher, continuing the story from last week’s Avenging Spider-Man.  It all revolves around the Omega drive that Daredevil still possesses and that five of the most dangerous crime organizations in the world want.  The three heroes hatched a plan that would involve destroying the drive in front of everyone in Grand Central Station, but when the time finally comes not everything goes according to plan.  I couldn’t tell exactly what happened in the last few panels.  Daredevil threw the drive, attempted to destroy it with a handheld power beam and that didn’t work and somehow stunned him, throwing him backwards into the crowd of enemies.  That part I got.  But how did the drive then end up right back where it started, at the feet of The Punisher’s lady friend?  I’m sure it will all explained in next week’s Daredevil #11, which I’ll be waiting for with bated breath.  The art in this issue by Marco Checchetto really impressed.  The faces on his characters definitely have a slight anime influence and The Punisher totally looks like Solid Snake from the Metal Gear video game series.