This week we’ll be looking at Daredevil, Mark Millar’s new series The Secret Service, Wonder Woman, and Avengers vs. X-Men Round 4.  One of them is awesome, two are pretty good and one is Avengers vs. X-Men.  Keep reading! 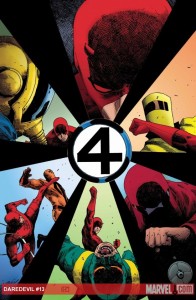 After Matt’s date with the Assistant D.A. went off the rails last issue, one would think that things couldn’t possibly get worse for the Man Without Fear…and one would be wrong.  With Omega Drive in tow, Daredevil gets attacked by the four remaining crime organizations all at once.  Things start to look pretty bad for our hero when Black Spectre arrives on the scene and once again disorients everyone, buying them time to steal the Drive from Daredevil and disappear into thin air.  Saying any more would be totally spoiling the story, but the issue ends with a completely unexpected twist that puts Daredevil in a tight spot – literally.  I love the Omega Drive as the main plot point because it keeps the stakes high at all times, but things seem to going in circles at this point; Matt antagonizes the criminals, they come after him in huge numbers, fighting ensues, and nothing substantial really happens.  I have total faith that Waid knows exactly where this story will go, but he’s definitely taking his time getting it there. 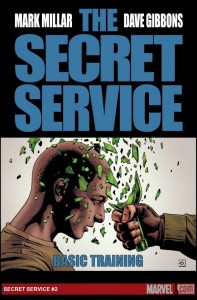 Mark Millar always has a lot on his plate, but the quality of each individual project never seems to suffer because of that; the fact that he always finds the very best artists to work with doesn’t hurt either.  The Secret Service, drawn by Dave Gibbons (Watchmen) tells the story of a highly-trained secret agent for the British government who enlists his punk of a nephew to become a spy.  The first issue focused on the nephew, Gary, and his life of crime and general bone-headedness.  In this issue, Gary finds out his uncle’s profession and begins his training to become the next great super-spy.  It’s a story that seems tailor-made for the big screen and I’m curious how far Millar will be able to stretch it without running into all the clichés that go along with this genre.  It’s proved entertaining so far, with intriguing plot points that have barely been touched upon and will hopefully come together to become something great.  The characters themselves seem compelling enough, even though they don’t really have much to set them apart; Agent London has “James Bond rip-off” written all over his finely tailored suit and high-tech wristwatch.  Millar is usually great at taking well-worn genres and flipping them on their ears, and I hope he can do the same here – as of the second issue, my hopes are high. 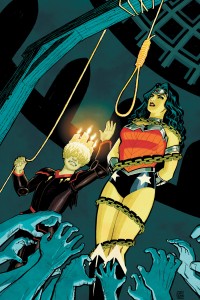 While Brian Azzarello’s Wonder Woman has one of the most complex and sometimes difficult-to-follow storylines of the New 52, it’s also one of the most original and dark concepts of any superhero story out there.  Greek gods and goddesses are portrayed as humans (or sea-monsters) that walk the earth and usually cause a lot of trouble just because they can.  The main plotline has been that Zeus, who took the form of a human and impregnated a country girl named Zola, is missing, and his many siblings are all vying for his throne.  Diana has been protecting Zola from the powers that be, which recently brought her to the depths of the Underworld where she was shot through the chest by Hades himself.  This week’s issue is the darkest the series has ever seen, with images of death, slit wrists and suffering souls filling the pages.  Artist Tony Akins does a commendable job, particularly with Hades’ grotesque throne, but I would have loved to see on-again off-again artist Cliff Chiang’s interpretations of Hell.  Wonder Woman is getting ready to marry Hades in order to secure the freedom of Zola, but of course nothing is as it seems when Azzarello is involved and the issue ends with a doozy of a cliffhanger.  This was another excellent issue that only could have been made better with Chiang’s distinctive art. 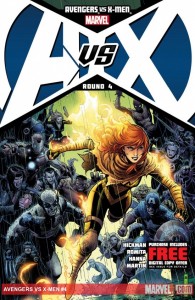 Avengers vs. X-Men has gone from a fun, if unremarkable, comic to an offensively empty shell of one in the span of only four issues.  This issue, scripted by Jonathan Hickman, jumps around so much that any semblance of a narrative is totally thrown by the wayside.  When both teams should be searching for Hope, they’re instead punching each other all around the world, starting fights that will surely be finished in the pages of that awful AvX: VS book.  The lack of any kind of depth was excusable in the first few issues as the story was still being introduced, but when every issue is essentially the Avengers and the X-Men fighting each other in different locales with no real consequences or character developments, it’s hard to justify a purchase.  That being said, this issue does end with a promising cliffhanger that will hopefully advance the story and bring this book out of the rut it’s currently stuck in.