This week, Before Watchmen messes with history, Daredevil somehow manages to keep getting better, and Wonder Woman gives Hades himself some romantic advice.  Check out all the details inside! 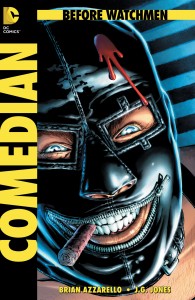 As soon as I learned of Brian Azzarello’s involvement in Before Watchmen, my opinion of the whole thing went from indifference to anticipation.  This week finally brings Comedian, the first of two characters that Azzarello will be writing.

Much like how Watchmen mixed real-life figures and events with a cast of fictional characters, Azzarello would have us believe that Eddie Blake was a friend of the Kennedy brothers.  He takes this concept a step further by weaving Blake directly into Kennedy’s assassination in November 1963, almost implying that Comedian himself indirectly caused the young President’s murder; in the world of Before Watchmen, JFK was on his way to a famous steakhouse in Dallas, Texas to meet up with Blake when he was shot.  Playing with historical events for the sake of a story is always a tricky technique, and even Azzarello falters with it.  He portrays JFK as someone who uses the phone in his Oval Office to talk about betting with his friends, and we’re shown a side of Jacqueline Kennedy that simply does not make sense.  I appreciate Azzarello’s efforts to explore these huge political and social figures more intimately but it’s hard not to get taken out of the comic’s world when the personalities of people who actually existed are being made into fiction.

Luckily, Azzarello absolutely nails the character of Eddie Blake/Comedian.  He’s clearly a troubled, volatile and unpredictable guy and every word that comes out of his mouth reflects that.  He’s also a totally badass fighter, and his raid on a warehouse occupied by a suspected drug dealer is one of the coolest action sequences I’ve seen in a while.  It’s reminiscent of a scene from John Woo’s awesome film Hard Boiled and it shows Blake’s violent behavior at its height.  Artist J.G. Jones knows how to draw an action scene, but that’s not to say the rest of the book isn’t handled just as well.  His realistic art perfectly fits this gritty story; if I had to nitpick (and I always do), I would say that his rendition of Jacqueline Kennedy looks a little bit off.

If you’ve been following Before Watchmen until now, there’s no reason not to pick up this week’s Comedian.  A lot happens in this first issue and I’m definitely looking forward to seeing where Azzarello will take this character.  If he can keep up this quality with Rorschach, which is coming in just a few weeks, I’ll be more than pleased. 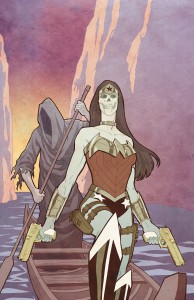 Last month left Wonder Woman in a very odd position: about to be married to Hades while a noose loomed over her, ready to hang her if her love was found to be untrue.  This week’s issue sees her attempting to escape the weird little guy’s clutches and being met with fierce opposition, until she’s finally rescued by an unlikely sibling.

My favorite thing about Azzarello’s take on Wonder Woman is how he portrays gods as regular people.  Hades is nothing more than a self conscious little man who wants nothing more than to love and be loved.  He just has a weird way of showing it.  I was a little surprised to see such a cliched saying used as a major part of the story (“No one will love you unless you love yourself”), but it somehow managed to come off as not super lame.  It does seem like something that Wonder Woman, a genuinely compassionate character, would say in that situation.  The writing is uniformly fantastic in this issue, as is the art, and it all ends with a twist that I certainly didn’t see coming. 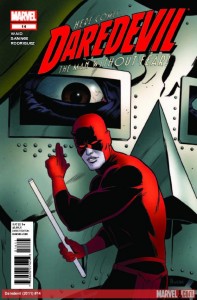 After getting spoiled with almost weekly installments of Daredevil last month, the wait for this week’s issue was particularly difficult.  The wait was entirely worth it though, as Mark Waid once again ramps up the action and danger in this stellar series.

Daredevil is trapped in the two-by-two prison that he was mysteriously teleported into as the issue begins, and things rapidly progress from there.  He’s exposed to a strange gas by Dr. Doom’s personal assistant and then set free, experiences the effects of the toxin on his body as he attempts to escape Latveria.  In a classic case of dramatic irony, we the readers are let in on the true nature of Daredevil’s affliction and we find out what will eventually become of him.  It’s always hard to watch bad things happen to Daredevil because Waid has made him such an incredibly likable character, and the ending of this issue is absolutely devastating on many levels.  I’ve never connected with a comic book character as deeply as I have with this one, and watching horrible things befall him really makes me sad.

Daredevil is the best comic on the shelves right now, no hyperbole intended. This issue keeps up the quality we’ve come to expect while raising the stakes to dizzying heights.  A must read issue.