The wait for Spaceman was getting a little bit ridiculous, but it has returned this week along with a host of other great books.  The talented Gregg Hurwitz has taken over writing duties on the Dark Knight, and Before Watchmen continues with Nite Owl number one.  Keep reading for the details on these titles and more, and keep in mind that comics ship next Thursday instead of Wednesday (July 4th) in the U.S. 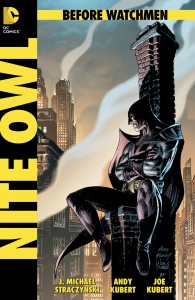 Last week’s unremarkable (but fun) Comedian aside, the creators behind Before Watchmen have been delivering consistently strong stories.  This week, J. Michael Straczynski delves into the backstory of Nite Owl (aka the one that’s always compared to Batman) and gives us another solid, but not perfect, first issue.

We see that the young Daniel Dreiberg used his obsession with Nite Owl to escape the unkind words of his abusive father, and eventually used his resourcefulness to track down his hero and convince him to take on an understudy.  In Watchmen, we saw early on how Hollis Mason served as a father figure to Daniel and it’s great to see how that came about in the pages of Nite Owl.  There’s some great character study here, but slowing down the pace and spending more time on these intimate moments between Dreiberg and Mason or even him and his mother would have made the book that much better.

The book also reveals the beginnings of Nite Owl’s partnership with Rorschach, who Straczynski portrays perfectly; from his stilted dialogue and awkward sense of humor to his frequent use of “hurm”, everything about the character is handled with respect.

In the riskiest move yet to be taken with Before Watchmen, Straczynski decided to include an exact scene from Watchmen — specifically, Ozymandias’s flashback of the first official meeting of the Crimebusters — to show how his story ties into the larger picture (unlike the previous books, Nite Owl catches up to the Watchmen timeline almost immediately).  Again, it’s handled well and it gives a perspective to that scene that we’ve never seen before.  We’re put right alongside Nite Owl as he forms his first impressions of the people that he will soon come to be great friends and bitter enemies with.

The art comes courtesy of the father and son duo Andy (pencils) and Joe (inks) Kubert, and it serves the story incredibly well.  Their gritty and rough style perfectly matches the Watchmen universe, although it sometimes lacks detail.

This book does what (I’d imagine) the organizers behind Before Watchmen set out to do with the series: take a closer look at each hero and tell stories that offer up exciting revelations while not stepping on Alan Moore’s toes or mocking his original creation.  Daniel Dreiberg/Nite Owl already had a huge role in Watchmen, so Straczynski tries his hardest to strike this balance and mostly succeeds.  If the rest of the series delves deeper into Dreiberg’s past while holding onto the strong sense of humor and faithfulness to the source material, Nite Owl will be a strong addition to the project. 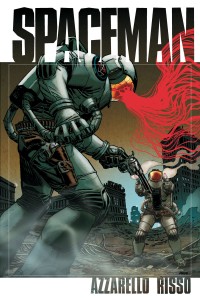 Almost at the end of its limited run, the fantastic sci-fi noir Spaceman is really heating up.  This issue answers some important questions, like exactly who the Spaceman bounty hunter is and how he’s connected to Orson, and throws a plot twist or two in for good measure.  The different groups hunting for Tara have finally crossed paths and Orson, who’s managed to escape any real danger for a long time, is finally caught in the middle.

There are really two separate stories going on, one being the flashbacks of Orson’s mission for NASA gone awry and the other focusing on Tara and her life on the run with Orson.  They’re finally starting to come together, and it’s making for one of the most intriguing science fiction stories I’ve ever read.  The plot is deceptively simple once you get over the strange dialogue, but it explores themes beyond those that are immediately apparent (the idiocy of reality television being one of the more blatant themes).

By the end of this issue, the stakes are high for every character involved.  The twist revealed on the last few pages is so incredibly awesome and I’m trying my hardest not to spoil it here, but I will say that it changes basically everything you thought you knew about this story. 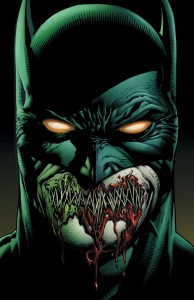 At the outset of the New 52, there were more Batman books on offer than there have been Robins in the history of the franchise.  Within the first few weeks I started to weed out the not-so-good ones, and The Dark Knight was one of those.  Between the out-of-place romance and the ‘roided up villains, David Finch’s story seemed to be going nowhere.  When I heard that Gregg Hurwitz, writer of the spectacular Penguin: Pride and Prejudice, was taking over writing duties my interest was renewed.

Hurwitz’s story begins not unlike many other Batman tales before it, with kids disappearing and mysteriously reappearing psychologically damaged.  The issue as a whole doesn’t cover much new ground either, but interesting character studies start happening right away.  Hurwitz wastes no time in involving Commissioner Gordon and his fears in the story, and we see a side of Batman that hasn’t been explored all that much when he sits with a troubled little girl and holds her hand in silence. Hurwitz has proven that he can take characters that we’ve known for a while and add a dimension to them that’s both shocking and sensible.  Hopefully he can give Batman and Gordon the same treatment as he gave to Penguin, and judging from this first issue that seems to be his aim.

David Finch is still drawing the comic, and his shadow-heavy art style is undeniably excellent.  He shares some similarities with Greg Capullo, which can only be a good thing.

If you felt overwhelmed by all the different Batman books and took a break from The Dark Knight, I would recommend returning to its pages.  Hurwitz is a great storyteller and I have faith in his ability to offer something new to even the most jaded Batman reader.

And one more honorable mention for this week…Hit Girl #1!  There isn’t much to say about this one; if you’re a fan of Kick Ass you know exactly what to expect.  Excessive and hilarious profanity, violence, and great art from John Romita, Jr.  This series will bridge the gap between Kick Ass and Kick Ass 2, so we get to see how Mindy Macready deals with the recent death of her father and adjusting to normal school life (which doesn’t last very long).  All the characters from the main series are here though, so it really just feels like another issue of Kick Ass with a little more focus on Hit Girl.  Any excuse to dive back into Mark Millar’s crazy imagination is fine with me, but this is an essential purchase for any Kick Ass fan out there.