This is a big week for fans of Spaceman, as the sci-fi noir series finally comes to its end. We also get another fantastic entry in Darwyn Cooke’s Minutemen, which keeps getting better and better each month. Read on for more details, and don’t forget to check out our X-O Manowar #4 review from earlier this week. 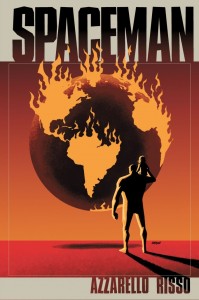 Brian Azzarello’s Spaceman has been ongoing for almost a year now — the first issue launched last October — and it’s been a unique and engrossing book the whole time. Melding science fiction with social satire isn’t a new idea, but Azzarello has pulled it off well by making the characters meaningful and incorporating a lot of heart into the story.

The last issue set the stage for an action-packed finale, and that’s exactly what Azzarello and Risso delivered here. This issue, more than any previous ones, plays out like an action film with cinematic cuts between Orson and Carter’s attempt to rescue Tara and the helicopter that Tara’s mother and TV crew are in. Seeing Orson and Carter work together is awesome, especially when Carter (the Spaceman with the bowl haircut and trench coat) crushes heads like ripe honeydew melons. When he finally shows that he’s nothing more than a money-hungry materialist, his past actions on Mars make a little bit more sense.

Having such a fast-paced issue was a big change from the usual deliberate pace of the book, and a few sacrifices had to be made. The events that took place in the TV producer’s helicopter had no real repercussions or explanations, and some important questions regarding Orson’s previous life on Mars remain unanswered. It doesn’t quite deliver on the lofty expectations that the first few issues set, but it remains a good finale to a great science fiction tale. 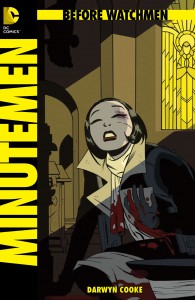 Darwyn Cooke’s Minutemen is already halfway done, which is pretty bittersweet. On one hand, I can’t wait to see how Hollis Mason’s struggle to get his book published will end. On the other, I just don’t want this exceptional comic to ever end.

Instead of wasting time and recycling the scene of Silk Spectre’s attempted rape at the hands of Comedian, Cooke focuses instead on the aftermath and the rest of the members’ decision to expel Blake from the group. These dark scenes are interspersed with clips from a vintage Minutemen comic showing the facade that the group kept up while strained relationships and turmoil ran through the whole team. A big focus is also put on Mason’s friendship with Silhouette, which is one of the most poignant relationships I’ve ever seen portrayed in a comic book. Mason is just such a likable character.

Many heavy themes are focused on in Minutemen (the bigotry that homosexuals faced in the 1940s, abused children, etc.) and handled with the perfect amount of humor and grace. This is still the best book in the Before Watchmen series by a long shot.