Daredevil returns this week after a fairly long break, but makes the wait worth it by being ridiculously awesome. Also this week, we get a classic Wonder Woman story and an eventful issue of Before Watchmen: Nite Owl. 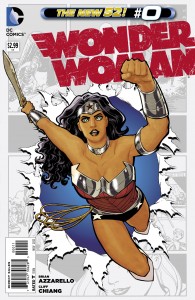 It’s obvious from the opening splash page of this issue that Brian Azzarello set out to make a comic in the style of the Silver Age, from the fonts used for the title and credits to the dry, expository writing style.

The story finds Diana in her formative years, still mostly confined to Paradise Island with her fellow Amazons. It’s her birthday, and she’s risking her life to get a gift for her mother (kind of backwards, no?). After her strength proves too much for a bully at her birthday celebration, Diana takes off into the woods and is confronted by War, who looks exactly like Azzarello. Seriously, Google it. War quickly becomes a father figure to Diana, who at this point in her life still believes that she was made from clay and doesn’t know that Zeus is her dad.

Because of the retro styling of the book, this is probably some of the most conventional writing Azzarello has done. That’s not to say it’s bad though; there are still some great one-liners and the dialogue between Diana and War can be pretty touching. There’s also some intense alliteration in the first few pages. Every step of the way, we get descriptions of what’s going on, what characters are feeling, and so on. It really gives the impression that we’re reading a comic from the 50s or 60s.

Thankfully, Cliff Chiang gives us more than just the cover in this issue and his art is predictably awesome. The fun, classic writing style mixed with Chiang’s totally modern drawing style makes for a unique and unmissable book. 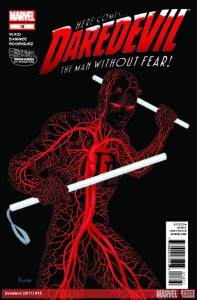 Honestly, does anybody pick Daredevil up off the rack with any doubt about its quality? It’s almost redundant to even talk about how great the latest issue is, but I’ll do it anyway.

With Matt and Foggy’s professional and personal relationship still on the fritz, Foggy is running the practice on his own. He gets a request to train a client for a high-profile case in which his sister is being convicted of murder. We haven’t seen many happenings from the law firm since the first few issues, so I assumed this issue would be mostly dedicated to Foggy and how he’s managing the firm without Matt.

However, Waid packs a ton into the issue, explaining this new case in detail and showing how Matt may or may not be losing his mind. The effects from the gas that he was administered in Lateveria seem to be causing him to hallucinate specific people into existence. I love this new angle; Matt is used to having the physical ailment of being blind, but the residual mental effects from that gas are adding entirely new obstacles for him to overcome, ones that he has no control over.

By the end of the issue, Matt and Foggy are sort of working together again, but only on Foggy’s terms. Matt could really use the help of his best friend right about now, but Foggy still doesn’t seem ready to forgive and forget just yet.

The overall feeling of this issue is more akin to the earlier issues of Waid’s run, before Daredevil was fighting the Mole Man, Doom or even the world’s most powerful criminal organizations. It feels much more intimate, and I have a feeling things will be taking a turn for the dark in the coming issues. The next issue is coming in four long weeks, but the wait will, as always, be totally worth it. 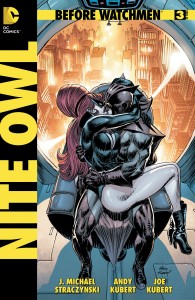 It feels to me like Before Watchmen just started, but here we are almost at the end of another character’s story. While Rorschach has been — and still is, sort of — a major focus in this book, Dan Dreiberg is still the main attraction, and J. Michael Straczynski is still doing a good job of conveying that character’s flaws and inherent goodness. It doesn’t match the quality of other stellar books like Minutemen or Silk Spectre, but it’s definitely doing justice to the character.

Dreiberg is continuing to help the intriguing Twilight Lady investigate her employees’ murders. Women obviously hold powerful influence over him, perhaps because of his close relationship to his mother growing up; she effortlessly convinces Dreiberg to do her dirty work while she sits back and watches. She’s definitely a mysterious and entertaining pro(ant?)tagonist, but I’m not totally convinced that a guy as reserved and prudent as Dreiberg would have gotten involved with her in the first place.

Half of the book is pencilled and inked by the team of Andy and Joe Kubert, but with the recent passing of the latter, the second half is completed by Bill Sienkiewicz. This half is also where the gratuitous T&A comes in. For all of Dreiberg’s awkwardness around the ladies, he sure gets a lot of action.

Overall, this is a fun book with an ending involving Rorschach that has definitely grabbed my attention. My biggest complaint is the lack of Rorschach throughout the issue, as the buddy-cop scenes with him and Nite Owl fighting crime together were probably the best things Straczynski had going for the book.