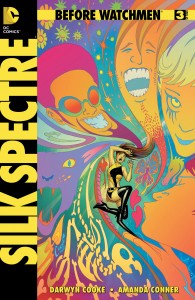 Silk Spectre has the distinction of being the only book in the Before Watchmen canon that has kept its tone relatively light with fun, colorful artwork to match. This month’s issue takes a slightly dark turn, but not before taking us along on a serious acid trip through the troubled mind of Laurie Jupiter.

Darwyn Cooke and Amanda Conner brilliantly write the script for what (I imagine) an acid trip would be like, with strange talking animals, paranoia and Laurie’s deep-rooted daddy issues coming to the forefront.

When things go back to reality and Laurie finds her boyfriend lying in a puddle of his own vomit, the story takes on a level of seriousness (and frontal male nudity) that we haven’t seen from it before. Per Sally’s request, Comedian heads out to find Laurie and he employs some of his badassery on her unsuspecting boyfriend, effectively ending their relationship. There’s a touching scene where Eddie looks down at his sleeping daughter before grabbing the iconic smiley face pin off of her dresser — so that’s where that came from!

This was another excellent issue of Silk Spectre, complete with Cooke and Conner’s excellent humor and heart while showing some of the darker consequences of Laurie’s recent actions. Conner’s art is especially fantastic this issue as well, going from psychedelic craziness one minute to realistic and expressive the next. Her art is packed with charm, and is just a joy to look at.

If this and the two previous issues are any indication, the fourth and final issue will be beyond great. We’ll get to see what Eddie forced Laurie’s boyfriend to write in that break-up letter and (hopefully) Laurie’s transition from slightly misguided youth to the hero that we know she will become. This series is a must-read. 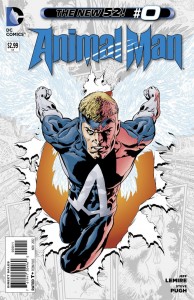 While these issues are distinct and don’t necessarily belong in a pair, I’ll kill two birds with one stone and review them together. After all, they both follow essentially the same pattern: quickly show the previous avatars of the Red and Green being brutally murdered by Anton Arcane and then give us a heavily abbreviated version of the current heroes’ origin stories.

If you’re familiar with these characters’ origins — either the ones told in the 80s or the New 52 versions — you don’t really need these books. Both Scott Snyder and Jeff Lemire attempt to add something new to their respective stories, but it doesn’t make for an essential purchase by any means. And in Lemire’s case, it just makes things unnecessarily silly.

Basically just fleshing out what we were told a few issues ago in Animal Man, Lemire shows us the process of Buddy Baker becoming a temporary avatar of the Red, marking time until his daughter, the true avatar, is born. In an attempt to form a narrative that Baker, a normal human being, can understand, the totems of the Red stage aliens landing on Earth that transform him into a superhero. He then immediately takes to his new powers and flies home to show them off. Maybe it’s just me, but how is a UFO landing on Earth and dispensing aliens that proceed to tear apart your body and infuse you with the power to absorb the abilities of any animal something that’s easy to understand? Couldn’t they have thought of something more discreet? 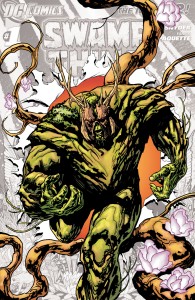 Swamp Thing #0, moreso than Animal Man, suffers from the problem of simply retreading (really) old ground, showing the night that Alec Holland’s lab exploded and sent his marred body into the swamp that led to Swamp Thing’s birth. Snyder tells us that Anton actually caused the explosion while wearing the skin of Alec’s wife, but that doesn’t really add anything of importance to the narrative. The only notable thing about this book is artist Kano’s attempt to break the world record for most grotesque images in one comic book. It’s worth flipping through the pages to see some of that, but only completionists and die-hard Snyder/Swamp Thing fans will find much to care about here.

Next week, September 12th, be on the lookout for Creep #1 from Dark Horse! Check out our review of the #0 issue, which might convince you to check it out if you haven’t. It’s shaping up to be one of the best comic book miniseries of the year and you would be remiss to miss it!