This week: Swamp Thing and Animal Man finally cross paths, Before Watchmen takes advantage of its mature rating, and Matt Murdock’s life starts to suck again (it was only a matter of time). Keep reading for the details on some of this week’s best releases! 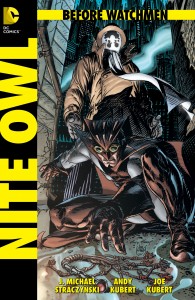 At this point, J. Michael Straczynski should just rename this series “The Awkward Adventures of Nite Owl and Rorschach,” as the focus is almost split evenly between the two characters in this issue. Whereas the first issue retreaded some old ground and showed some very familiar scenes from a slightly different angle, this time the stories are brand new.

The issue opens up with a very NSFW scene in which Nite Owl chases a criminal into an alley and ends up face-to-face with a naked female fetishist. It’s weird and seemingly an attempt to make the book more mature just for the sake of it. Rorschach shows up shortly after and is not as impressed as Nite Owl by the display, which quickly causes a rift between the newly formed dynamic duo. Before long they’re back together, investigating the murder of a prostitute and having generally awkward. Rorschach’s stilted speech is mostly to blame for that, as the dialogue is mostly good if not a little bit contrived.

The real meat of the book is dedicated to flashbacks of Dan Dreiberg’s past. Straczynski does a good job of showing Dan’s state of mind as a child, which gave him a reason to become a hero. He was a misfit, bullied mercilessly by his peers. His one true source of inspiration was his mother, who took a nightly beating from her husband but never let it get to her (why didn’t she just leave him or call the cops?), and her bravery led to Dan taking on his bullies at school. He continues that self-destructive behavior by going against his friend Hollis Mason’s advice and returning to the den of the naked woman from the beginning of the book.

After last issue’s somewhat shaky start, I’m starting to warm up to Straczynski’s imagining of Nite Owl. Even though he was perhaps the most emotionally stable member of the Watchmen, he still had his demons and this book is delving deeper into exactly where those came from. The main theme of this issue is his overly empathetic personality, likely brought on by his feelings of neglect as a child and his resulting reluctance to think of anyone as inferior to himself.

Readers who complained that the first issue was simply recycling material from the source will want to give this issue a read before making their final judgements. 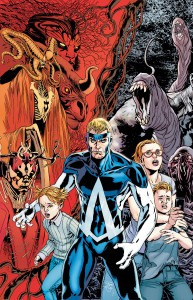 Since the beginning of the New 52, writers and real life buddies Scott Snyder and Jeff Lemire have been hinting that Swamp Thing and Animal Man would eventually get together for the most epic crossover ever. This week finally sees that happen, and the result is everything that we could have hoped. And the best part is that this is only the prologue.

These two books essentially make one long issue, as Swamp Thing picks up directly after Animal Man. With Buddy and Alec both back in the real world from their various exploits in the Green/Red/Rot etc., they can join forces and take down the Rot for good. After some very quick recaps of the story so far, the duo jumps into a conveniently placed portal and their war with the Rot begins. They run into Anton Arcane almost immediately, who wastes no time in trying to royally screw up their plan. Back on the surface, Abby fights alongside Buddy’s wife and daughter against the minions of the Rot who immediately spring out of the portal. The issues continue in that way, jumping between the two scenarios until an insanely bleak ending finishes it all off. 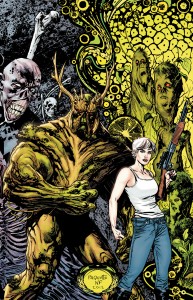 As should be expected from both of these writers, the dialogue is great and the story is completely epic. Both series have managed to hold onto the small, emotional character moments while telling a story on an impossibly huge scale. The fate of the entire world rests in the hands of these two bizarre superheroes, but they’re mostly fighting for their loved ones.

The art in both of these issues is also remarkable. The page layouts in Swamp Thing have always been incredibly creative and similar in style to the character’s 80s roots (now that’s a pun!) and seeing that style span the pages of two entire issues is really something.

This story won’t continue until October, as next month introduces the “#0” issues which will explain the origins of the characters. When it picks up again, I have no doubt that we’re in store for some of the craziest, biggest events in comics history. 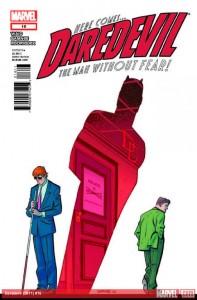 This week’s issue of Daredevil opens with a great guest-appearance from Giant-Man, as he fights the nanobots running amuck in Matt Murdock’s brain and robbing him of all his remaining senses. Their memories start to leak into one another, making for an interesting introduction to Henry Pym’s backstory that, in typical Mark Waid fashion, draws a connection between two heroes that manages to take us by surprise. As Giant-Man’s microscopic body starts to adopt the traits of Matt’s body, he learns of the struggles that Matt’s blindness brings upon him, making us appreciate even more just how awesome of a character Daredevil is.

Quickly after Matt is healed he heads back to the offices of Nelson & Murdock, only to be faced with even more strife. Foggy is sick of being treated as second-fiddle and demands that Matt either get his act together or leave the firm. It’s an emotional scene, made even heavier after the powerful display of friendship that we saw in issue 12, from Matt and Foggy’s college days. After so many years of horrible things happening to this character, it seemed like Matt was finally getting a break. Waid pulled the rug out from under us with this issue, and I can’t wait to see what’s next.