Comics Korner: The Wicked + The Divine #2 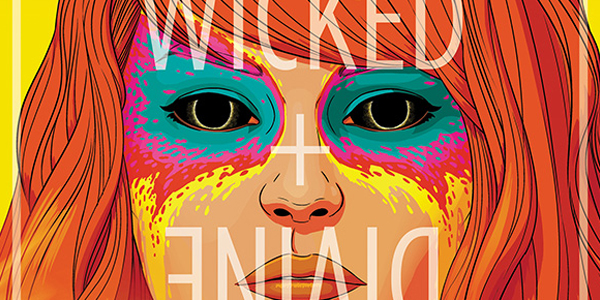 Image released The Wicked + The Divine #2 this week, a story about twelve gods that return as teenage pop icons, and what they do before their death in two years.

My pick for new book of the week would go to The Wicked + The Divine #2 put out by Image Comics. Kieron Gillen is writing the story and Jamie McKelvie is doing the art. The gist of the story is that twelve gods have returned as teenage pop icons, but don’t worry– they’ll all be dead in two years. The Wicked + The Divine #2 centers around Laura, your typical starstruck teenage girl and her struggle to help save Lucifer. Yup, that Lucifer… except she prefers Luci. Trade the red cloak for a white pant suit, some male parts for some female ones, and alter the definition of horny and you got the sexy blond woman that is sitting in prison.

For those who would like a quick recap, Luci got herself into a bit of a pinch in the previous issue. She was messing around, pointing her mystical god fingers and may or may not have made the judge’s head explode. She claims she’s innocent, but this is Lucifer we’re talking about. As Luci is being dragged from the courtroom, she pleads to her friend Amaterasu to find Ananke. I would have done a quick Google search to find out what this means, but alas Gillen & McKelvie do it for us. There’s an amusing sequence of panels showing Laura researching on her phone. As her questions get more intricate, the results dwindle and are replaced with Blah Blah Blah…this is turning into homework. Basically Ananke is the personification of necessity, and apparently is the only one that can help Luci.

Laura enlists the help of Cassandra, the reporter that was interviewing Amaterasu in The Wicked + The Divine #1. They meet at the National Portrait Gallery and have a rather intriguing conversation about the validity of the deities powers. Cassandra thinks the entire thing is one big hoax. Ultimately, they decide they need to speak to the other gods to figure out how to help Luci. Cassandra tasks Laura with hunting down the hardest god to find, known as the Morrigan.

The Morrigan is a god out of Irish mythology and is generally considered a war deity. There are some references to wealth and land, which could easily be obtained by conquest. In the story, Laura explains that the Morrigan is very unlike the other gods. While the others crave the attention, and make it very easy for their followers to receive them, the Morrigan is reserved and makes her fans work for it. We follow Laura down a long staircase, deep within the heart of the London Underground. There is some really creative use of pacing here, showing one big field of black with an illustration taking a small portion of it. They lay the text out so you have to take your time reading it, descending down the prose just as Laura descends underground. The starkness of the page makes you question the layout choice at first, but once you reach the end of the sequence, it makes a little more sense. The concluding panel shows a bad ass dude with a skull belt buckle, fangs, and dude-bro aviators, and apparently he’s not the Morrigan.

The Wicked + The Divine #2 forces more questions than it answers, which for a series this young, is a good thing. There’s a lot yet to learn about the other gods and their abilities, with two spots yet to be revealed at all. Also, having gone back to the first issue, it would appear that although the rest of the gods die, Ananke doesn’t. However, it’s the visuals that drive the interest in this story. The colors and the art are invigorating, using bold colors and clever transitions. There’s a scene early in the issue where one character is whispering in the other’s ear, and the art is done in such a way to call your attention to the whisper, letting the rest of the scene fade away, but the way it’s laid out, you get the understanding that a third character was able to hear, without saying it in plain English. The team of Gillen and McKelvie are as fun to read as they are to follow on Twitter, and I highly anticipate the release of The Wicked + The Divine #3.