Comics Korner: The Wicked + The Divine #3 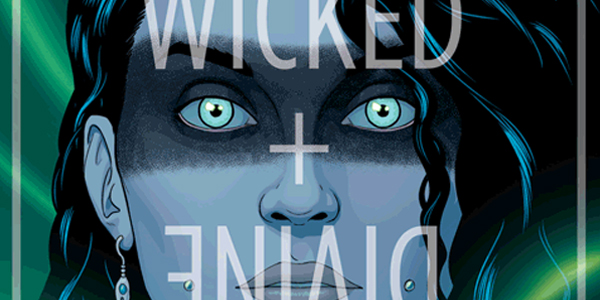 Head’s up! The Wicked + The Divine #3 is full of angsty teen gods ready to rip each other apart.

Twitter champions Kieron Gillen and Jamie McKelvie released the third installment to their cryptic creation entitled The Wicked + The Divine. The series is published by Image Comics and also includes the talents of Matt Wilson on the art. For those following the story, we left Laura, the naive superfan of pop deities, in an abandoned train station. She, along with a crowd of fans are waiting for a performance from The Morrigan. Instead, some shirtless vampire held Morrigan’s severed head high over the crowd, and proclaimed to be the new king of the underground.

The Wicked + The Divine #3 picks up right where we left off, with the dripping head of The Morrigan. McKelvie gives us a close-up of the head staring blankly at her gathered audience. To perpetuate the confusion the shirtless vampire in the leather jacket commands the head to speak. Turns out this guys is Baphomet, another one of the teen gods, and his schtick is shock and awe…ful comedy. He also can control illusions, and the reader learns abruptly that the head is merely a trick. What gives it away? It would be The Morrigan entering the train station amidst a cloud of crows. She confronts Baphomet, and the two argue over the trickery he’s pulled. One more bit of confusion, she isn’t calling herself Morrigan now, and she doesn’t look a thing like the severed head. She is Badb, the crow-like war goddess from Irish mythology. Both Badb and Baphomet flex their magical muscles in a show of power that looks more like a pissing contest. The tension is finally broke by Laura, who picks up the fake head of Morrigan, and begins quoting Shakespeare. This strikes at the core of Badb, and after a couple relieving breaths, transforms back into the Morrigan, trading her fiery red hair for the jet black locks as on the severed head.

The reprieve is short, and Baphomet and Morrigan continue their shouting match. What follows is another interesting series of dark panels like in the previous issue. Mckelvie and Wilson explore another mostly black panel that shows Laura becoming engulfed in a hairy black abyss (also known as your mom). From here, she falls effortlessly through two dark pages of death contemplation. The panel is ripped open by a rubber bullet, fired from one of the officers that have come to break up the party. The shot catches Baphomet between the shoulders, which sends him further in a rage. With a quick snap of his fingers, the officer that fired upon the god becomes consumed by flames. Another officer manages to quell the flame, but the victim doesn’t show any signs of live. Before anyone can call the time of death, a female skinhead with crow tattoos calling herself Gentle Annie interrupts. She approaches the dead officer, and with a mere swipe of her finger, she manages to breathe life back into the perished policeman. As she walks away, one of the officers tries to stop her, but in an ongoing plot to confuse the hell out of the viewers, Annie proclaims that she doesn’t want to hurt anyone, but with a quick change between panels, Annie becomes Badb, and Badb reminds them that she’d love to hurt them. She escapes into a dark tunnel, and is closely pursued by Laura, who manages to catch up with her (as The Morrigan) somewhere in the darkness of the tunnel. Laura asks her to help her catch Baphomet, because he must be the real person who made the judge’s head explode (did you forget that’s what this was really about? Yea…so did I). Morrigan surprisingly says that Baphomet has an alibi. He and Morrigan were lovemaking at the time, and that he couldn’t have possibly done it. With that, Morrigan disappears, and Laura gets arrested by an approaching officer.

Gillen reminds us that Laura is a teenager by showing the resulting altercation between her and her parents. What I liked about this interaction was that the reader doesn’t actually hear what is being said, or rather, screamed. McKelvie illustrates a series of very expressive panels, showing Laura yelling at the top of her lungs, but instead of cursing, Gillen gives us her retrospective on the matter. She admits that she is saying things she doesn’t mean, and she wishes her parents were more strict? Not really sure, but the page ends with Laura stomping up the stairs and saying she wants out.

Through one of the signature The Wicked + The Divine ring of symbol page, the story picks back up with Laura meeting her frienemy Cassandra at a coffee shop. The pair are seen video chatting with the imprisoned Lucifer, and going through their list of suspects. I fear my knowledge of world theology is limited, and a lot of the names zoom past without a notion of who they are. Hopefully Gillen will continue to provide ample context information when the names are relevant. After going through a list of suspects, the trio decide that Baal is their main lead. He was the angry black guy being interviewed at the beginning of issue two, and if you don’t remember him, you’re in luck. He’s overheard their entire conversation, and the book closes with him shouting at Laura and Cassandra about how if they want to talk behind his back, make sure they are not in his face.

The Wicked +The Divine #3 continues to be one of the more confusing stories I’ve read. Like I said before, maybe not knowing a lot of these names is proving to be a disadvantage, but I can’t imagine that most people know who Baal or Baphomet are. The confusing premise doesn’t detract from the beautiful pages McKelvie and Wilson are creating. The contrast of vibrant neon colors against the very dark backgrounds results in an aesthetically dynamic page. It could take the whole series before the reader can truly appreciate the web that Gillen has woven, and I plan on sticking it out until the end just to be sure.