Comics Korner: The Wicked + The Divine #4 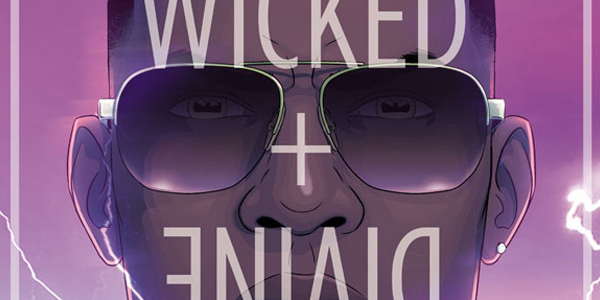 The teen deities continue to align against each other as the drama builds in Image Comic’s The Wicked + The Divine #4 by Kieron Gillen and Jamie McKelvie.

Newly released from Image Comics comes The Wicked + The Divine #4, a continuation in the tale of teen deities and the everyday conflicts that come with the territory. The creative team for this series includes writer Kieron Gillen, artist Jamie McKelvie and colourist Matthew Wilson. The story has been centering around Lucifer, who is stuck in prison after she may or may not have made a judge’s head explode. We follow superfan Laura and “journalist” “friend” Cassandra as they continue to find whodunnit.

Their prime suspect? Baal, a male teen deity who has been in most of the previous issues. He’s aggressive, arrogant, and Laura adores him. I can’t help but picture him as a classier Kanye West, especially when he delivers lines like, “When you’re as good as I am, this is humble” while addressing a thirty foot mural painted in his honor. Baal leads Cassandra and Laura from his painting down a long blue hallway while being accused of murdering the judge. But that’s not his schtick. Baal doesn’t do fire, he does lightning which derails Cassandra’s case rather quickly. She switches gears, and begins asking why they don’t do anything to help Luci, which is a fair question. The answer we get is that the gods are staying away, and letting whatever happens happen. Baal doesn’t much care either way. The way he sees it, nothing matters because they’re all going to be dead soon anyway. Baal leads them to a guarded door, which only Laura and he can get through, leaving Cassandra yelping in the distance. Laura is able to pass because of her relationship with Luci makes Ananke want to speak with her.

However this is no private meeting between Laura and Ananke. Amaterasu, Minerva, Sakhmet and Woden with his valkyrie are also in attendance and are dispersed throughout the great room. This sends Laura into a tizzy. I really like how Gillen gives us two sides to Laura’s character. In her head she is self deprecating and doubting, but when she speaks, she is able to conjure the courage to oppose the gods. Ananke thanks her for spending time with Luci, but won’t do anything to help free her. They refuse to use the true abilities they have in front of humans because our brains wouldn’t know how to comprehend it. The gods continue to tell us that in all honesty, any of the six of them in that room could have done it. So as to not implicate themselves, they decide it best to let Luci sit in jail and let the whole thing play out. What struck me as the most interesting piece of information we get is that the humans could potentially stop the gods from being able to come back every ninety years. Faced with the possibility of not being allowed to come back to play, the gods do nothing to help Laura, and send her away with but a message to give Lucifer. The message simply being it’s not too late not to be foolish.

We find that Laura has made it back to Luci by the next page and is sharing the info she got from Ananke. Things don’t go well. I mean, why should they? This is Lucifer she’s talking to, and up to this point, Luci has been rather timid. Thankfully, not for long. In a blazing act of defiance, Luci explodes the manacles binding her wrists and hands, and melts a hole in the clear wall keeping her imprisoned. I love how she’s able to cause an explosion at the snap of her fingers, which makes two guards fly away. Also, I really liked how bad ass Luci looked while smoking a cigarette under the sprinklers, all while managing to not get a single drop of water on her. Laura tries to talk her out of throwing it all away like this, but it proves little effect on Luci. Instead, she throws on The Rolling Stones – Playing With Fire on her iPhone (which I appreciate the music reference, but how did she get a phone into prison?) and floats through a newly burned hole in the prison wall.

The Wicked + The Divine #4 is one of the more interesting issues in this series. We got a taste of the power of the deities in the first issue, but the story quickly degraded to the judge’s murder mystery. So when Luci finally took it upon herself to change her surroundings, I was elated. She finally acts the way a god should. Gillen is weaving a very interesting web of teenage drama between the characters, which should make for some great fighting scenes in upcoming stories. And to be honest, that is what I’d like to see more of from this series. Maybe not to the extent of God is Dead, but some real conflict between the gods so that McKelvie and Wilson can draw more explosions and mayhem would be great. All the gods will face death in the near future, and I plan on sticking around to see every gory bit.