Comics Korner: The Wicked + The Divine #5 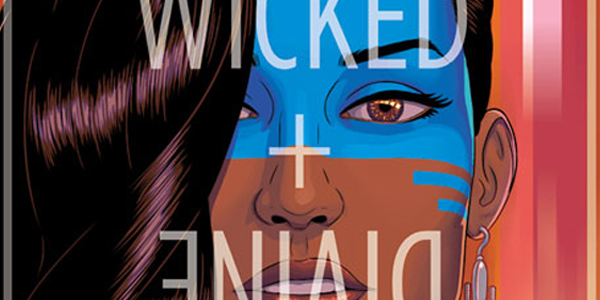 Cat fights and bloodshed abound in the closing of the first arc for Image Comic’s: The Wicked + The Divine #5.

Image Comics released the fifth installment of The Wicked + The Divine, which also happens to be the end of the first story arc. The creative team for this series includes writer Kieron Gillen, artist Jamie McKelvie and colorist Matthew Wilson. The series has focused on fangirl Laura and her struggles over getting one of her favorite pop stars, Lucifer, on the straight and narrow path. It’s not going well.

I mean c’mon. Her name is Lucifer, she’s not some strange blond chick with a tight crop who’s named after the god of darkness, she is quite literally the manifestation of this horrendous god. So it shouldn’t be too surprising that she has a blatant disregard for property, or people, or anything for that matter. However, her wanton destruction is not good for any of the god’s images, so the whole crew has come out to deal with Luci. It starts with Amaterasu, the rainbow makeup chick from the first issue. She tries the nice approach of getting through to Luci, which has little effect. Baal, the large, angry and egotistical black guy from the last issue tries a different take. As Gillen promised at NYCC, what follows is a pretty fantastic three page fight scene between the two of them. McKelvie draws electricity erupting from Baal’s eyes as he drives Luci’s face into the concrete. She responds by trying the same trick she used on the judge, but the fire doesn’t phase the rival god. Luci thinks she has the upper hand, until Sakhmet goes all catty and sinks her claws into Luci’s backside.

Laura is stuck watching wide-eyed as the struggle unfolds, feeling helpless. In a snap judgement, Laura runs down the stairs into the subway and starts calling for the Morrigan. She doesn’t find her on the platform, so she hops down onto the tracks and heads into the darkness screaming at the top of her lungs. However, she’s only met with the growing glow of an approaching train’s headlights. Moments before she’s made into Laura soup, The Morrigan slips out of the darkness and pulls her to safety.

Back topside, Luci is on the losing side of her struggle with the pair of gods. Baal and Sakhmet are trying to convince Luci to go back to her cell, but their arguments aren’t very strong. Especially when Luci straight up asks Baal if he’d go back, to which he replied “never”. Right before the blows continue, a rush of black birds swarm in providing cover. In the midst of all the feathers, Laura is able to find Luci and walk her to safety, which includes Cassandra and her film crew. I especially liked the little quip between Laura and Luci regarding the cameras. Laura demands they stop filming to which Luci retorts that the worst thing to do would be to stop filming. Luci has a small breakdown, and apologizes to Cassandra and Laura for all the mess and the hurt feelings, like when she called Cassandra out for being trans. Luci eventually decides to head down to the Morrigan’s turf to seek refuge, and makes for the door. She only gets one step outside of it.

Waiting outside is Ananke, who looks none too pleased. She reminds Luci that she is loved, then snaps her fingers. Then boom, she’s gone. Much like the judge, Ananke snaps her fingers and Luci ceases to be. When I saw this panel, I gasped. It was shocking and heartbreaking, and totally needed to happen. As Laura and Amaterasu hold their headless friend, Ananke explains why she had to do what she did. The gods police their own, for that is her purpose. She has seen many of these godly uprising throughout her time, and what happened, needed to be done. She puts it well, mortals have always been way more interested in gods, than gods in mortals.

What follows is a blur of panels that feels like the rush of time after a tragic event. In a balance of black panels with white text paired with color representations of what’s going on, we see Laura being interviewed, and eventually, being the center of attention. Her face is on news shows all over cable, which seems to alienate her from society. This stress paired with the loss of her friend depresses her. She’s left with one last gift from Luci though, a lone soldier in an empty pack of cigarettes. She puts the smoke to her lips, then in an attempt to pay homage to Luci, she mimics what she would of done. She smiles, snaps her fingers, and OH MY GOD IT LIT. As Laura puts it, it’s not over.

The Wicked + The Divine has been an enticing and enjoyable series from day one. It’s clear that Gillen and McKelvie don’t take themselves too seriously, but like to have fun with serious concepts. In the note from Gillen at the end of the book, he puts the whole series in perspective. You knew these gods weren’t going to make it out of this story alive, just like life. At any point something dreadful or confusing can happen, and the beautiful gift of life can be taken away. So his message is to make the most of the time we have, and don’t waste a second. I’ve thoroughly enjoyed where they’ve taken this series, and although it’s a little predictable, I’m still intrigued to see how Laura’s powers unfold. The series is taking a small break to release the first trade titled The Wicked + The Divine, Vol 1: The Faust Act. New issues don’t start back up until December 17th.