Comics Korner: The Wicked + The Divine #6 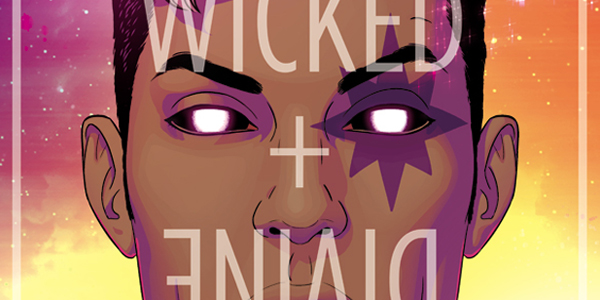 This week saw the start of the second arc for The Wicked + The Divine entitled Fandemonium. In case you forgot, the team working on The Wicked + The Divine #6 includes writer Kieron Gillen, artist Jamie McKelvie, colorist Matthew Wilson and letterer Clayton Cowles. As we pick back up with the troubled teen, fangirl Laura, a month has passed since Luci’s demise and clearly Laura is still having trouble coping with the loss. For one, she drastically changed her hairstyle, and her tone has altered, showing that Laura is less of the naive girl she was at the beginning of The Faust Act. She’s also convinced her snap trick at the end of the last issue was no mistake, but she can’t seem to repeat it.

The Skinny
Laura is taking the loss of Luci rather hard. She feels like what the Pantheon did was not necessarily for the greater good, despite what the President and all the other news outlets are saying. She’s also dealing with her increased popularity, after being seen in the midst of the gods. It’s kind of a big deal when you go from 93 followers to 30K. She deals with this by not retreating inside herself and slipping deeper into sadness. Amidst her depression, she receives a phone call from a god we haven’t met yet, named Inanna, who remembered Laura from the days before the Pantheon, when he was just a wallflower. He’s decided to help Laura sort out the details with Luci, because he found something that struck him as odd. It seems the two dead assassins that were trying to shoot Luci in the first issue weren’t hired goons or hitmen, they were fans. So Inanna agrees to be Laura’s Deep Throat, and to look for more clues on what’s really going on. The both go their separate ways, and Laura resolves to start talking to the fans. With the last panel, it’s clear they want to talk back.

The Good
Firstly, the Lucifer died for our sins upside down cross t-shirt is brilliant. I don’t often blurt out a laugh, but the idea of such a drastic flip in perspective is absurd and delightful, and I hope to purchase one at the next convention I see Gillen & McKelvie at. The storytelling continues to be one of my favorite aspects of this series. Each issue the team take a couple pages to experiment with their narrative. The scene where Laura has the pretend conversation with her mom separates it enough to make me feel like I’m really in Laura’s mind. Following this with the diorama of the life of Laura Wilson aged seventeen and three quarters is a really interesting way to show us her inner workings without using strictly dialogue. I’m also not afraid to admit I spent much longer than I should have looking for “L”. The art continues to be fantastic to look at, with panels featuring some of the brightest color choices I can remember. Wilson has probably used every shade in the Crayola box, but his talents go far beyond just picking the right hue. Like the rain changing to purple around Inanna to give him even more of a Prince vibe. There’s a lot more good in this story, so why don’t you save us both some time and just go read it already.

The Not-So Good
It seems like Inanna is now the replacement for Luci, making the dynamic of Laura having a godly teammate continue. I don’t necessarily think this is a bad thing, but when you’re dealing with a book this compelling, you need to find something to poke at. It also would appear the story will progress as a whodunnit, with Laura trying to solve Luci’s death, but it’s still too early to tell. Personally, I’d like to see less espionage and backstabbing and more sparkly gods beating the bag out of each other, but I understand this book is much more than that.

The Decision
The Wicked + The Divine continues to delight, surprise, and engulf me into a fantastic tale of gods living amongst humans for a brief moment in time. As the story has stated from the onset, they will be loved and they will be hated. We don’t see a lot of the other gods in #wicdiv6 but they’re still out there, healing or scheming for the past month. And there’s still the chance that Laura will be counted among them. You have to notice that there’s two missing symbols from the circle at the end of the issue, leaving room for Laura’s persona to awaken. I guess she’ll just have to keep hoping and practicing snapping until The Wicked + The Divine #7 is released on January 21.