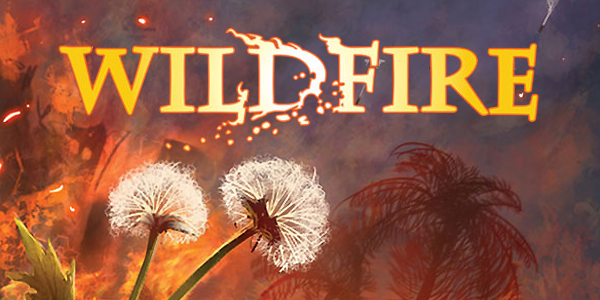 Wildfire #2 has Southern California covered in genetically modified kindling and just begging for a spark.

Wildfire #2 is published by Top Cow Productions, a partner studio of Image Comics. The story is written by Matt Hawkins, and Linda Sejic is creating the art. Wildfire takes a run at the debate over genetically modified foods, and presents a hypothetical scenario of what could go wrong.

The story picks up with a news anchor giving the readers a quick recap. Due to an altercation at Dr. Silva’s demonstration on genetically modified dandelions, Southern California is experiencing a sudden outbreak of dandelions. These dandelions aren’t your run of the mill mower food– this evolving breed is so strong that it’s able to grow through building walls, foundations and sidewalks. We meet up with Dr. Silva’s right hand man Dr. Miller. He’s the one who notices the change in dynamics, and pulls a sample for further study. After dealing with his younger sister, he finally makes it back to the lab. However, due to the previous day’s events, the lab is a crime scene, and Dr. Miller is detained by FBI Agent Chen.

While Agent Chen and Dr. Miller get to know each other better, Silva is getting berated by her superiors over the botched press conference. They inform her that the funding company, Biogenesis, is distancing themselves, and that the trustees want her out. Surprised and angered, Dr. Silva is left pleading for her job. It’s not just Silva that has to deal with issues though. In an attempt to contain the spread, an ever growing quarantine zone has been issued, but it’s unsure how effective it is.

The story jumps to the conference room of the KCLA news. Michelle, the reporter from the beginning of the story, is challenged to dig up more information regarding Dr. Silva’s work. As one would expect out of media today, KCLA plans to capitalize on the growing fear of the dandelions, and it’s up to Michelle to get the scoop. She is given a sidekick of sorts, named Sheila, though it turns out she’s only there because she’s really good at playing hide the hotdog.

Then, the unthinkable happens. (Except, given the title, and how much science-y background stuff Hawkins makes you trudge through so the story is properly framed, leaving you wildly anticipating the event.) All it takes is one car crash, one small fire building to a large fire. Growing and expanding rapidly, the city of Los Angeles must evacuate as the buildings become engulfed in a conflagration. Some people manage to escape, while others are left to fend for themselves amongst the flames.

Continuing the great art of the first issue, Wildfire #2’s Sejic paints wonderful looking panels with a realism to them. I enjoy when an artist takes the time to add the reflection of the trees on the glass of the window. It connects the reader to the story, giving me the illusion that I’m really peeping into their window (not in a creepy way). I also really like how the fire builds from the scene of the accident to what it’s become by the end of the issue. It appears Sejic was able to have some fun, creating popular Californian landmarks, like the Hollywood sign, ravaged by fire. As for the story, Hawkins has his stage set. The terror is real for the people of Los Angeles. The city of angels is on it’s way to becoming the city of ash, and he has this reader fired up and ready for what happens next.