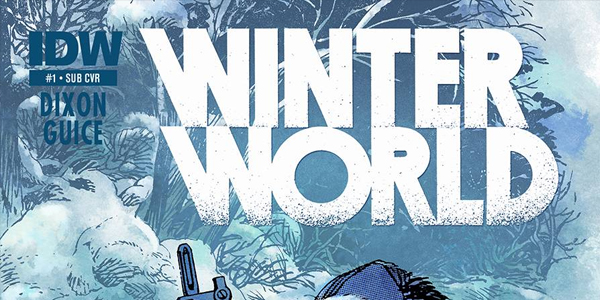 IDW revives the classic Winterworld to explore new stories of a world gone cold, and what people are willing to do to survive.

Winterworld is a new series, released by IDW, that reexamines the late 1980’s mini-series of the same name. Both stories are written by Chuck Dixon (with Jorge Zaffino sharing the credits of the previous version) and explores an Earth that has become a barren, lifeless wasteland covered in snow and ice. The art is by Butch Guice, a well-versed illustrator with many publications from the big two on his resume, and captures the temperature of the story amongst dynamic panel art and layout. To be honest, I didn’t know this was a pre-existing story until I did some research on the book, and it can be read without having to go and find the original publications.

The story revolves around Scully, a hard nosed older male character, and his 14 year old female companion Wynn. Just to avoid any weirdness, the dynamic between the two is more of a big brother/ little sister existence, so get your mind out of the gutter. The pair are currently on the hunt for Wynn’s parents until some car troubles makes them alter their course slightly. Oh, and they have a third member to their party, a bad-ass badger named Rah Rah that acts like the family dog.

The team happen upon a war ship, and decides to stop in for supplies. Dixon takes this time to shed some light on who these two people are and what values they hold. Scully heads for supplies and ammunition while Wynn collects books and a sweet looking captains hat. Although it was subtle, I found it interesting that Wynn was able to boot up a laptop and get to an internet search engine (humorously called Oggle in the Google typeface). She’s unable to do much with it because Scully pulls her away, but the fact that the internet is still functioning leads the viewer to believe that civilization must still exist somewhere. They manage to score themselves a new vehicle, and hit the icy bricks, continuing their mission.

The last few pages of the first issue shows us some other people that call the iced earth home. Scully and Wynn are chased by wolf-wielding men with torches riding snowmobiles. There’s no real talk as to who these people are, why they want to harm Scully and Wynn, or more importantly why the entire planet is one big snowball. The letter from Dixon at the end of the story suggests that you may never know why the world is iced; this story is about people adapting to their surroundings.

The concept is only minorly interesting. The story offers a unique look at life in a snow globe, with art that drops your core temperature if you stare at it too long. The conclusion of the first issue leaves more questions than anything. I will probably read the second installment, in hopes that the story heats up, but as it stands now the tale is basically Waterworld, just a bit cooler… man, I love puns.