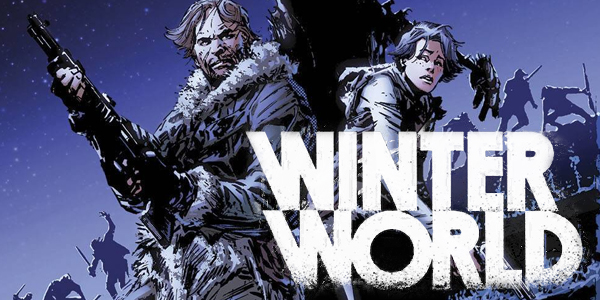 Two survivors fight through a snow-covered wasteland only to find that the coldest place on Earth is the human heart.

IDW released Winterworld #2 this week, a story about Scully and his young friend Wynn on a hunt through a snow covered Earth, in search of Wynn’s parents. The story is written by Chuck Dixon with Butch Guice doing the illustration. At the end of the last book, we left Scully and Wynn on the run from cannibals in an abandoned shipyard. They are driving an MRAP straight at a towering stack of shipping containers, and for a second, it looks like it might be a really short book this month. Thankfully, Scully shows off some expert driving technique, and saves the day. Hooray! Scully, Wynn and Rah-Rah (Scully’s faithful pet badger) high tail it out of there, leaving the cannibals with the mess.

The team make it all the way to the Pacific Ocean, and we finally get a geographical sense of where they are. Due to the world being frozen, they’re able to drive right through the Panama Canal and up the coastline. They meet a man on a sled pulled by two buffalo, and barter some canned food for some information. The man on the sled speaks of a plane that flew over recently, then points the crew in the direction of a village called La Niña. The two parties separate and go about their business.

The story jumps back to the cannibals and a very odd guy that likes to speak in the third person. His name is Skitters, and with a name like that, who wouldn’t want to tell people every time you spoke. Skitters “makes less man-eaters” with the flamethrower he happens to be wearing. When he is almost done eradicating them all, he notices one left, cowering in fear. Skitters informs the survivor that he is looking for a man, a little girl and a badger…sound familiar? The cannibal replies that they were just there, and they’re headed for the sea. This makes Skitters happy.

We pick back up with Scully & Wynn, following the coastline in search of La Niña. The pages that follow show the struggles of daily life for them. On one scavenge mission, Wynn finds a plane filled with cocaine, and mistakes it for sugar. Luckily she only tastes a little, which makes her tongue feel funny. At this point, I couldn’t help but consider that the tundra must be a terrible place to develop a habit. Anyway, eventually they see a flock of birds and catch a whiff of warm sea air indicating they are close. What comes next astounds them. Just over the ridge in La Niña, a green oasis in the middle of the frost-barren desert. Scully resolves to wait until nightfall to check out the town, so they do. Once the sun goes to sleep, the pair make their way down the mountain face, towards the town. Unfortunately, someone wasn’t paying close enough attention, and sets off a trap. The story closes with Scully and Wynn bound and beaten, awaiting judgement.

Winterworld #2 overall is kind of a snoozer for me. Guice’s art is exciting, and makes good use of sound effects to add drama to the panels. The explosion caused by Skittles contrasted all the bleak coloring of the landscape beautifully. However, the story seems a bit cliche, and moves at an odd pace. Dixon writes in some entertaining bits about Rah-Rah the badger but the comedic relief falls short, given that their isn’t a lot of building suspense. Ultimately, I feel detached from these characters, and lack a certain warmth towards them. I can understand Dixon’s wanting to keep to the highlights, given that they are covering miles of territory. Sadly, the whole thing gives me a Day After Tomorrow feel, where nothing ever can go right for these people. All I’m waiting for are the wolves.