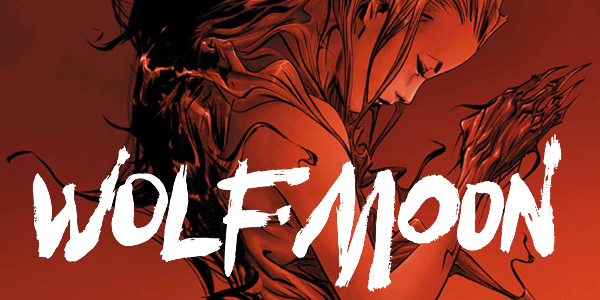 Vertigo’s exciting new horror series, Wolf Moon, is about a hunter chasing an ever changing monster.

Wolf Moon is the newest six-issue mini series released by Vertigo. The team for Wolf Moon #1 is comprised of writer Cullen Bunn, artist Jeremy Haun, colorist Lee Loughridge and letterer Travis Lanham. The series follows a werewolf hunter by the name of Dillon Chase, who lost his family to a werewolf, and has been determined since to hunt it down and end its savagery.

The Skinny
This isn’t your typical werewolf story. Instead of one main wolf, that affects one man, this disease is able to change hosts with every moon cycle, allowing it to stay hidden until it strikes. This causes Dillon to have to monitor broad areas of news for attacks, scouring for the ones that sound like a werewolf. Eventually, enough hits cause Dillon to leave a girl named Caycee and head for Kentucky. Once down there, it doesn’t take long for Dillon to find the werewolf and go toe to toe, but he doesn’t have the courage to pull the trigger. Obsessed with revenge, yet he still worries too much about the victim under the pelt. We also get a look at some evil scientist type at the end of the series, who is also interested in the werewolf victims, but with a more surgical intent.

The Good
The werewolf is pretty damned terrifying. Haun and Loughridge collaborate on some gruesome panels filled with furry carnage. The story is gorey but I didn’t feel like it was over the top. I also really like the wolf transition panels with the guy in the rest stop. It may cause me to question knocking on locked bathroom doors in the future. The fight scenes are exciting and offer a bunch of good looks at this killer beast. In terms of the story, I really like the concept of the wolf changing each lunar cycle, so that one person isn’t the wolf very long. This makes finding the wolf way more challenging, and offers a varying perspective on the lycanthropic disease.

The Not-So Good
Spelling mistakes happen, but it’s extra bad when the error affects one of the creators. For a company as big as DC/Vertigo is, with two editors on the book, you would think they’d be able to get their colorist’s name spelled correctly. Did it ruin the story? Of course not. But as a fellow creator, I would be very bummed to see my name misspelled regardless of the context. My major gripe is how conveniently Dillon was able to find the wolf. Kentucky is pretty big, but thankfully he was able to show up just in time to save the little boy. To me, it felt like the incidents were happening way too quickly for a police call to be overheard, but a scene with Dillon listening to a scanner could have connected it better.

The Decision
Wolf Moon #1 is dark and gory. The werewolf is drawn in a very intimidating fashion, and the colorist is getting a lot of use out of his blood red markers. The story is different with the werewolf changing host bodies, and the hero Dillon seems likeable enough to want to root for. It’ll be interesting to see how Caycee plays into the story, and what kind of assistance she’ll be. Also, we’re left to assume Mason is the guy putting amputated parts in jars at the end of the story, so the threat of him being an additional protagonist is appealing. The hunt continues on January 7, when Wolf Moon #2 comes howling.