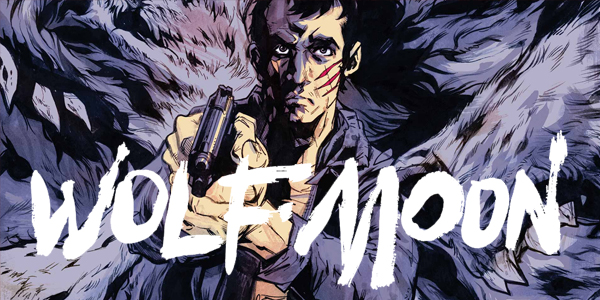 Scars are tattoos with better stories, and Mason’s takes the cake. Find out more in Wolf Moon #3 by Vertigo.

Vertigo released Wolf Moon #2 earlier in January, which is a story that takes a different look at the lore of the werewolf. The creative team is comprised of writer Cullen Bunn, artist Jeremy Haun and colorist Lee Loughridge. This issue spends some time building on the characters and the trials they’ve met up to this point.

The Skinny
Because Dillon was unable to pull the trigger in the previous issue, the wolf spirit is still on the prowl, moving person to person through exchanged glances. Together with his handicapable buddy Mason, they continue to scour for leads. Also, through some gory backstory, we learn how Mason got his scar and why he cares so much to see this through.

The Good
The concept behind the entire story is very interesting to me. I like how they treat lycanthropy more as a parasitic disease, that can easily move from host to host, and only inflicting it’s disease on the night of a full moon. With this idea, a person could be carrying the dormant spirit of a werewolf and never even know it. Also learning that Mason knows a lot more about the people under the fur than we first thought helped me to understand his passion and make the character seem less like a crazed monster hunter and more like a hero. The wolf scenes are exciting and bloody, and pulls no punches.

The Not-So Good
I like that Mason has an identifiable mark that makes him easy to spot in a group shot. However, if we’re to believe that he got the scar from razor wire, as the flashback alludes to, then it would help if the scar matched the weapon. I can only assume that it was an artistic choice to use razor wire instead of barbed, but the three clean lines would most likely be way gnarlier if it was caused by razor wire, especially with the way it tangled around his snout.

The Decision
Wolf Moon #2 is definitely a character building issue. With four left in the series, it’s good that the team took some time to connect us to our point of view character and share why he’s so hellbent for justice. It also shines a light on why he had trouble pulling the trigger in the last one. He knows, better than a lot of people, what the person underneath is really going through. Hopefully he’ll be able to overcome his fear when Wolf Moon #3 comes out February 4th.