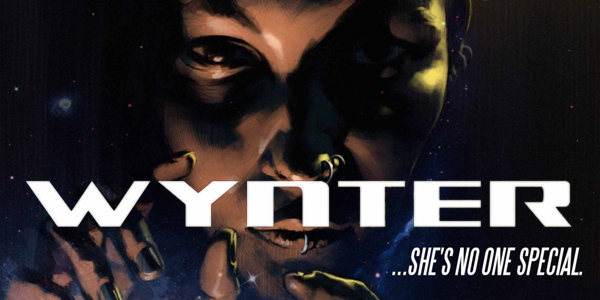 Liz Wynter is not special, but this indie series is. Click that read more to find out why.

In an ongoing effort to bring attention to indie series, I was eager to read the free issue of Wynter #1 writer Guy Hasson sent my way for connecting on twitter. Together with artist Aron Elekes, they tell the story of Liz Wynter, a typical teenage girl living in a futuristic hive mind society. The series is released by New Worlds Comics and pains a picture of a futuristic world where cell phones have evolved, past our hands and into our brains. This means people have evolved to nodes on a neural network. Liz doesn’t want much out her world, just to be special.

The Skinny
Liz Wynter is not special. She is a very average 17 year old girl living on the futuristic planet of Melantho. We know this thanks to the ai feeding her information throughout the entire issue. Her best friend Shane shares an app with her that allows them to peak into the lives of the people passing by. What they find has dire consequences.

The Good
First and foremost, the art is beautiful. The facial tones and shadowing build a wonderful surrealistic environment. Although she’s a bit bleak, dare I say goth, Liz Wynter is a hero we can all relate to. She is at a point of self realization and is following the path that lays before her. The overall premise of the story is equally interesting. Hasson shows us just how far statistics can go if you have enough data, and just how powerful it can be.

The Not-So Good
I think it’s especially hard for indie books to attract attention, and keeping readers connected is another battle. That being said, spelling mistakes are the first thing that ejects me from a story. To have one on the second page is pretty “specital”. There’s more the farther you go. Also, I found some of the layouts difficult to follow at times. I really like how there are limited borders being used, but this makes it harder to lead the reader through the narrative in the right order. It wasn’t like this through the whole story, but in a couple parts I needed to reread the page to make sure I got understood.

The Decision
Ignoring the grammar issues and forgiving a couple confusing layouts, Wynter is a very cool look at a troubling future built on our biostatistics. To know how very not unique we are at any given moment is horrifying. I thrive on the slim chance that I think differently than the hive mind, so I feel for Liz and her strife. I plan on checking out more work from this creative team, and by the looks of it, they’re already up to Wynter #4. Looks like I have some catching up to do.