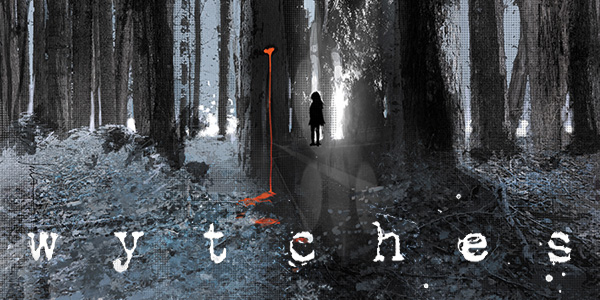 Wytches is the new series from Scott Snyder and Jock that is so scary it’ll make you CHHIT in your pants.

Image Comics released Wytches #1 last week, the new horror-thriller from the mind of Scott Snyder. The art is drawn by Jock, colored by Matt Hollingsworth and lettered by Clem Robins. The first issue follows a teenage girl named Sail as she tries to connect with her new surroundings. After a run-in with a local bully, Sail’s family decided to live free or die up in New Hampshire. Given the amount of blood that gets spilled in this book, the slogan for New Hampshire seems oddly fitting. Wytches is filled with weird sound effects, heavily inked panels and a creepy color palette all working together to deliver some straight up heeby jeebie goodness.

The opening scene involving the Cray family sets the tone for the book pretty quickly. Pledged is pledged as they say, so once the creepy tree witches start CHHIT’n and decide you’re the next meal, there’s no use running. The story stays but a moment in 1919 before jumping to the present. We’re introduced to our point-of-view character pretty quickly, having an odd conversation with her dad, Charlie at the bus stop. It’s clear they have a good relationship between them, because Charlie knows just what to say to crack the anxiety Sail is feeling. It’s her first day at a new school, and she’s sure everyone is going to recognize her. With some gentle persuasion from dad, she gets on the bus, where it takes little time for the people start talking. She tries to ignore it by staring out the window, but then some creepy dude in flannel comes stumbling out of the woods asking “pledge?”

We meet Sail’s mom, Lucy, who is confined to a wheelchair. Both she and Charlie also fear everyone will know about their daughter, but they try and get get on with a normal life. Charlie draws comic books, which I’m sure was a very tough character for Snyder to write. Aside from what we learn about the series he’s working on, we also get a lot of backstory from a conversation Charlie is having with his editor. Something happened in their hometown, but they only tease it for now, to let the suspense build. After the incident, they looked to the granite state for solace and a shot at normalcy. His conversation ends abruptly when his wife points out that a deer has wandered into his studio.

When we finally learn what happened to Sail, it’s shocking to say the least. She was bullied by this tough chick in a wife beater named Annie, and the night she finally went to stand up for herself, something terrible happened. Aside from bringing a knife to a gunfight, Sail is forced to start undressing in the middle of the woods by her would be assailant. The familiar CHHIT CHHIT sound raises Annie’s alarm as well as her blood pressure. She cracks Sail in the head with the butt of the gun, then goes to investigate the sound. What follows is a two page spread of sheer gruesomey goodness. Jock pulls no punches as creatures from the trees claw at the bully and pull her inside, leaving Annie screaming EEE! I really liked how Robins’ typography carries the viewer into the next panel of the deer coughing up the organ. The closeness of these two events, paired with another sighting of a CHHIT CHHIT suggests this family is in for some more misfortune.

The issue finishes the same day, right before bedtime. Charlie asks Sail about her day, to which she responds with short answers. However she is ready to talk about something. She opens up to him about how much she wanted bad things to happen to Annie, and how she feels like it’s her fault. Charlie tries to get her to see that wishing and acting are two different things, but Sail seems unconvinced. They agree to try and get some sleep, and Charlie heads downstairs to talk to Lucy about what to do about the studio. While Sail is sitting in bed, something outside catches her attention. Scratch that, more like says her name in such a creepy way it makes the hairs on my arm wiggle a little. On the tree limb outside her window, CHHIT’n away stands a nightmarish looking Annie. With an AAGH, a crash and Mr. creepy flannel guy pulling out his teeth on their front lawn, we’re left with Charlie saying my god… 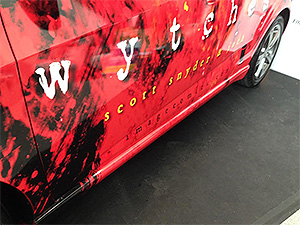 Wytches #1 is weird, disturbing and really fun to read. It transitions between different parts of the story seamlessly, showing off Snyder’s story-telling ability. Jock’s art fits this tale so well. The art is very dark in some places and thinly drawn in others, creating nice visual variation. I like how he sometimes focuses in on something very small, even when telling big parts of the story, like a fear stricken eye, or a newly ralphed kidney. Also, you can’t help but notice the texture that sits on top of the colors. Matt Hollingsworth is making these pages perfect with great contrasting colors and interesting overlays. I really liked his work on Fraction’s Hawkeye story, and think he’s a really good fit with this creative team. I’m pretty excited about this series, and it seems like Image is too. I mean hell, they’ve been hyping this series so much that they even wrapped a car in it’s logo at NYCC. Look for Wytches #2 out November 19th.