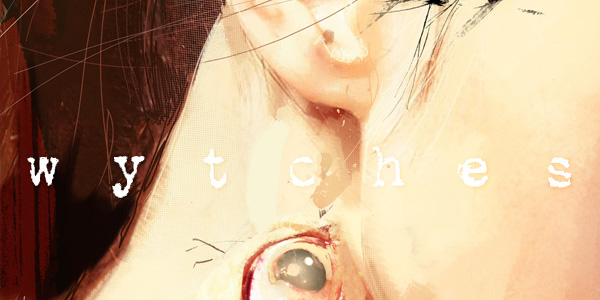 New this week is Wytches #2 a thrilling tale about a young girl being tormented by evil creatures.

Image Comics released the second issue to the Wytches series. After seeing rave reviews for Wytches #1, writer Scott Snyder, artist Jock, colorist Matt Hollingsworth, and letterer Clem Robins are back with a sophmore issue that will scare the pants off of you. Fortunately for me, I rarely wear pants.

We pick up with a look at the story Charlie is working on, about a kid at an amusement park. He and his editor or going through the premise of his story while Charlie tries to get the chair lift working for his paralyzed wife. After raging out on the chair, Reggie, the editor, finally gets him to crack and spill the beans about what is really bothering him. We left Sail, his daughter, at the end of the last issue screaming for help. Without spending too much time on it, Sail had a bully that seems to have turned into a horrible wood witch. Sail is certain she was attacked by this girl, but there’s one problem. On all accounts, this girl has been presumed dead for a while. Well, if Sail is making it up, then how did she get the weird mark on her neck?

We catch up with Sail who is suited up for gym swim class. Before Sail can dive into the pool, the curious girl from the first issue tries to say hello again. Surprised and a little agitated, Sail admits to murdering her bully just to shut the girl up. Instead, the girl, who goes by Melina, apologizes for her rudeness and seems to want to make friends. Right before Sail is forced to swim by a shouty coach, she catches a creepy ass glimpse of the wood witch that attacked her in her room.

While Sail dives, we move to her mother Lucy, who is hard at work at the hospital. She’s talking to a young patient in rough shape, when she’s startled by the head nurse Clem. In an attempt to not feel useless, given her condition, Lucy works extra hard to be an asset to her team. The two switch topics and start talking about the patient, who is the victim of a hit and run accident. Lucy noticed that the bag hooked up to the boy is a different color than what she remembered, but as she asks Clem about it, the boy sits up and speaks. With bloodshot eyes, he and Lucy talk about what she really hit on the night of her accident. The boy can smell it on her, someone close to her has been pledged. And you remember the little boy with the rock at the beginning of the series. Pledged is pledged.

We jump back into the pool with Sail as she traverses the water through delusions of forests. This is followed by the bandage coming off her neck wound, exposing what looks to be an alligator’s eye, or some other type of gross ass growth. Melina pulls her out of the pool as Sail is panicking and pawing at her own neck, but there’s nothing but a little lump. Was it in her head? Clearly she’s freaked, but have you ever been so freaked out that you steal a school bus? Right before we see grand theft school bus, Charlie gets a call from Lucy, and the two talk about the test results from Sails neck. It doesn’t seem to be threatening, but it’s quite peculiar. The cells are old, like should belong to a much older woman. Charlie doesn’t’ get much farther due to a distraction coming from upstair, and he hangs up to go investigate.

We see Reggie riding on his motorcycle, and it’s he who spots Sail speeding in a stolen bus. Mix in a flashback to the night of Lucy’s accident. Something was lying in the middle of the road. Jump to Sail who is screaming at the woods. Well not the woods specifically, but her assailant Annie who won’t seem to leave her alone or show her face. Reggie finds her kneeling down, in the midst of tears and tries to convince her to come home. Before they go, they’re startled by something. Then it’s back to the house with Charlie who is exploring the sound he heard upstairs. Before he gets too far he’s KRACK’d on the back of the head with what looks to be a prosthetic leg. The attacker is the strange bald guy from the first issue. He’s straddled over Charlie, ready to bear down very menacingly. Then switch back to the woods where Reggie and Sail can see creepy skeletal beings with wide eyes peering from behind the trees. Flash back to Lucy’s “deer” which looks a lot like a horrible friggin nightmare beast and NOTHING like a deer. Back to Reggie and Sail who are bracing for impact with the wood beasts. Without much effort, the witches able to get face to face with Sail, so much so that we’re left with a reflection of her face in the witches’ eye. Then we land back with Charlie and freaky flannel man who ends the issue with a palm full of dust into Charlie’s face and the assertion that he never had a daughter to begin with. What the hell!?

Wytches #2 is bizarre and creepy and a hell of a good read. The story picks back up a little slow with the dialogue between Charlie and Reggie, but then wastes little time before amplifying the creepy factor with jump cuts and ink heavy art. Jock and Hollingsworth are clicking, first laying creepy illustrations that contrast between hard inked lines and weathered looking ones, followed by a haunting color palette and the use of a lot of layering. What results is a very multifaceted art style that is the perfect vehicle for this sinister story. Wytches #3 sounds like it will expand on Sail’s time in the woods, but the teaser reminds us that we need to understand that prayers will fall on deaf ears. There is no escape from the Wytches. I can’t wait to see what happens when it’s released on December 3rd.