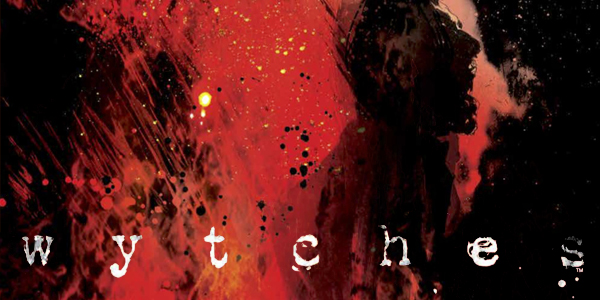 The Rooks family is being torn apart by creatures most can’t see in Wytches #3 from Image Comics.

Right before Christmas, Image released the next installment to the Wytches series, a continuation to the weird story of wood witches coming for our pledged souls. The story is written by Scott Snyder with Jock on art and Matt Hollingsworth on colors. In the last issue, Sailor was heading to the forest to face her fears head on, which may not have been the best decision.

The Skinny
Wytches #3 is mostly about Charlie and Lucy coping with the fear of a missing daughter. Sail has had a rough few years, and her battles with wood witches surely aren’t helping. The odd bald man in the last issue, isn’t as much of a man as I had thought, mostly due to her breasts, which she also happens to stick a needle into, and subsequently into Charlie. C’mon guys, sharing needles is bad news. Basically what you can expect is for the creative team to pour on the suspense while forcing you to question how much time does Sailor have left?

The Good
It’s Scott Snyder and Jock. These two collaborate wonderfully to create some of the scariest pages I’ve experienced. Then they have Hollingsworth add layer upon layer of added texture and tones that results in a visually tactile page that could induce claustrophobia. You can see this illustrated with Hollingsworth’s process included at the back of the book. With the art comes a fairly simple story at the surface, that is gaining an increasing amount of intrigue as it continues and more characters are introduced. The layouts offer a great balance of slow building pages that lead up to full page pummelers, like the abstract version of a witchified Sailor that happens early on or the body map later in the story.

The Not-So Good
It is just so damned sad. It seems like anything good in this book gets buried under an avalanche of agony. Every character experiences some sort of pain, whether it be emotional or physical, like poor Reggie. This isn’t a bad thing, but it does play into my mind when I go to sit down and read. Personally, I like stories with some sort of small triumph in every issue. Something that causes the main character to evolve or experience a struggle, but eventually they overcome it. It may be that I’m just stuck in the struggle of this story, and triumph is too far away to see, but at times it really feels like all hope is lost for Sailor.

The Decision
Wytches #3 is terrifyingly fun and visually satisfying to read. The story is dark and disheartening at times, but we’re left with a small bit of hope at the end, coming from Charlie’s tummy. I liked that Sailor learned the lesson to always have a match on her, especially because we catch a fleeting glimpse of her captor at the end of the issue. We’ll just have to wait to see if Charlie finds here when Wytches #4 is out January 28th.