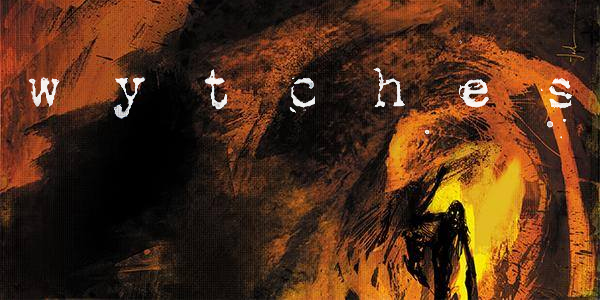 Charlie knows who has his little girl, he just doesn’t know what to do about it.

Last week, Image published the next installment to Scott Snyder and Jock’s twisted horror series Wytches. Matt Hollingsworth is working with the creative team on coloring this tragedy wrapped in timber. Wytches #4 continues to test Sail’s well being while her father struggles to find her while finding the strength to go on.

The Skinny
Sail is still lost and trapped by the witches. Her father Charlie gets some insight, via his stomach, but questions its validity. He goes and hangs out with that weird woman from that last issue, as she explains further what a witch really is. We also get a look back at some less than quality time between Charlie and Sail, and learn just how far he’s come.

The Good
This series has been pretty bleak up to this point. With hope all but dwindling, it was refreshing to get a little from this issue. It’s still not certain Sail will escape alive, but thanks to Charlie, she might have a shot. The cliffhanger is shocking and sent me right back to sadville. I can’t express how much I’ve enjoyed the art so far. This issue continues with page after page of textured terror. The series of panels that show Charlie exploring the rickety house are slanted and crooked, adding to the feeling we’re already getting from context, intensifying the whole sequence.

The Not So Good
Towards the end of the issue I got a little confused and discouraged by some of the character’s actions. Although it was interesting to have Charlie’s interaction, Sail’s attempt to escape and the flashback play at the same time, it was confusing to keep it all straight. Then when Charlie see’s what he does, I feel like he wouldn’t just go home. He’s been a man of action up to this point, and the bald woman just gave him answers.

The Decision
I’ve pledged my eyes to the Wytches series. It’s super creepy and dark, which is a great playground for the art of Jock and Hollingsworth. From what I can tell, rescuing Sail is going to be a very challenging affair. This should allow us to continue to see Charlie’s agony build on his face and in his actions. What will he do when his love forgets their light? I can’t wait to find out when Wytches #5 comes out on February 25th.