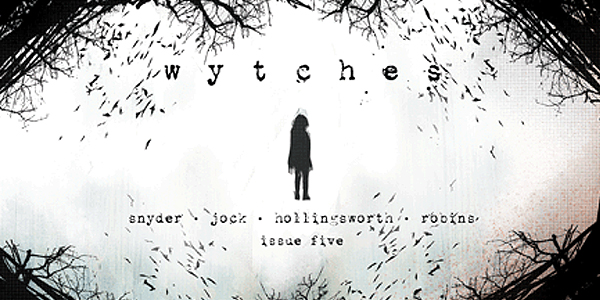 Charlie tries to keep it together while his world is falling apart.

At the end of March, Image released Wytches #5, the latest installment to Scott Snyder and Jock’s dark horror drama. Working with them to add texture and color is Matt Hollingsworth, and Clem Robbins is laying out the type and chits. The story has seemed pretty bleak up to this point, but there might be a light at the end of the tunnel… or is it the light of hell?

The Skinny
Charlie’s world has crumbled. His daughter Sail was kidnapped by witches, he was accosted by a very strange woman with an odd assortment of knowledge, and now his wife can’t remember they had a daughter in the first place. While he struggles to keep it together, Sail struggles to stay alive long enough for Charlie to save her from her bark wrapped prison. Will he be able to make it in time?

The Good
Wytches continues to be a very fun and freaky read. The pages are filled with a great mix of layouts that keep every page turn feeling fresh. The inky outlines paired with layered coloring make scenes, like the ones in the tree, way more hectic feeling, and intensify the tension. In terms of the story, it was good to see Charlie and Sail together again, despite what’s ahead of them. Lastly, it’s a little disturbing to learn just how many witches there are…and how influential they can be.

The Not-So Good
Having Officer Petal in the house felt super awkward. I understand he helped connect a large amount of what the bald chick was saying to the reader, especially about what Charlie is going to face, but some of his dialogue felt clunky or heavy handed. I had forgot that Charlie knew him, and thought it was strange that Petal just walks into their house and everyone is ok with it, well at first. Ultimately, I like how he gets used towards the end of the issue, and appreciate his importance, I just hope we don’t have to spend a lot more time listening to him blather going forward.

The Decision
Hot damn! We finally got some hope going on around here. However, leaving Charlie and Sail in a hot mess is not making the wait for the next issue any easier. Between that and trying to find out who else in the town is a witch, I’m very excited to grab an issue of Wytches #6 which isn’t out until May.