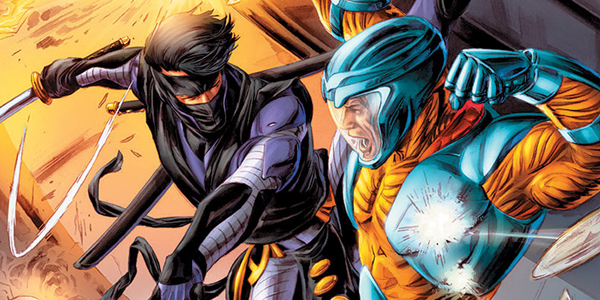 Just days after their fantastic showing and show-stopping panel at New York Comic Con, Valiant keeps the momentum going with X-O Manowar #6.  As thought-provoking as it is action-packed, X-O continues to offer a gripping, multi-faceted story that will suck you in leave you begging for more.

Writer Robert Venditti crafts an outstanding narrative that occupies a special place in the current Valiant Universe and, moreover, comics in general.  Inside the shell of the most technologically advanced bio-weapon in the known world lies a primitive man displaced in time and out of his element.  Imprisoned in deep space aboard an alien vessel for years, he escaped to find that sixteen centuries have passed him by and, utterly alone in the modern world, isolates himself in mourning.  With his ancient Roman adversaries long dead and his mysterious alien captors well hidden, Aric of Dacia has no outlet for the intense rage and thirst for revenge that are consuming him.  Now, the alien race known as The Vine, whose sleeper agents have already gained prominent positions within the human population, will stop at nothing to regain their sacred armor and are on the verge of waging a full scale invasion of Earth.

Picking up where last month’s cliffhanger left off, the Vine agents within the British Secret Intelligence Service hired Ninjak, a ruthlessly proficient assassin, to incapacitate Aric and secure his armor.  While Aric was busy interrogating Alexander Dorian, a Vine agent and the lone survivor of a previous attempt on his life, Ninjak was able to take him by surprise and put him down with tranquilizer-laced shurikens.  Unable to determine specifically how Aric and the X-O armor are linked, Ninjak separates the two and loads them into his jet for transport. Meanwhile, Vine leaders are shocked to discover Alexander is still alive and congratulate him on the mission’s success.  Things take an interesting turn, though, when the Vine reveal that, even with the armor in their possession, they still plan to annihilate Earth.  Although Aric wouldn’t pose a threat without the Armor of Shanhara, The Vine, whether fueled by fear or spite, are uneasy with the implications that come from a mere human being the only suitor of the armor in millennia – especially after countless Vine soldiers have been subjected to a lethal rejection when trying to bond with it.

Dorian objects to this as he and the other sleeper agents have worked long and hard to cultivate Earth, believing his race could thrive there and that razing the planet would be a grave mistake.  With The Vines’ minds already made up, Alexander makes an impulse decision which sets a devastating series of events into motion, culminating in explosive action and unlikely alliances.  Once you start reading it, it’s impossible to pull yourself away.  Between its top notch script and beautiful artwork, X-O Manowar is consistently impressive, with an intensity that’s been building steadily since the first issue.  Back in the early 1990’s the original iteration of Valiant absolutely out-shined every other publisher on the market by offering brilliant, believable stories and characters you could really become invested in as opposed to paint-by-numbers superhero schlock…and they wasted no time whatsoever returning to form 2012.

And don’t think just because X-O Manowar is built on a smart, thoughtful narrative that it skimps on action — the bone-crunching battles present throughout its six current issues will knock you flat on your ass.  I really enjoyed the fight sequence in this latest issue which takes place on a plummeting aircraft.  As if choreographed for a movie, Aric and Ninjak engage in a brutal dance within the craft’s confined spaces.  While Ninjak does his best to elude his high-powered opponent and use the environment to his advantage, Aric smashes through bulkheads and tears through walls with reckless abandon.  And for fans who have been eyeing the lightning sword present on several of the book’s covers and wondering, “When are we going to get to really see that in action?”, you’re wait is over.  I won’t reveal any more of what happens in this issue, which is pretty packed with great plot developments and general badassery.  Comic fans should do themselves a favor and add X-O to their pullbox — the story is ready to kick into high gear and you won’t want to miss a page.  Simply put, the guys at Valiant are doing it right and are knocking it out of the park with this and every other book they release.  Check out some preview pages and cover images from this month’s issue: 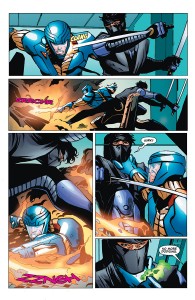 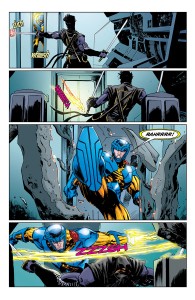 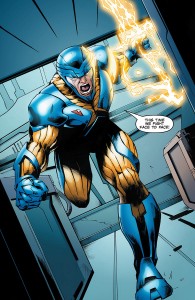 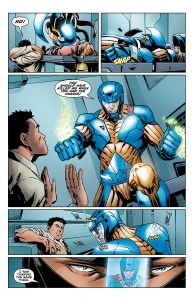 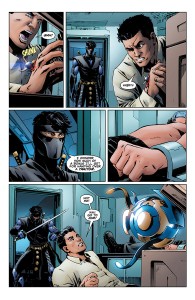 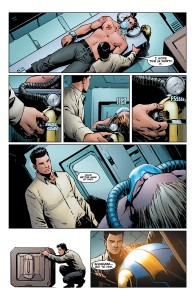 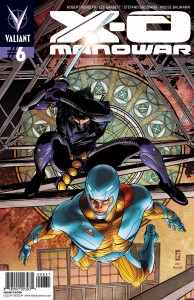 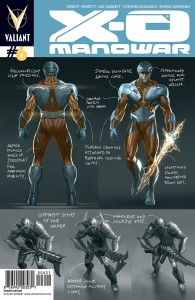 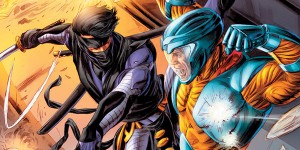