Coming in 2016 from DST: Deadpool, Catwoman and the Alien Queen!

A new batch of Diamond Select Toys products is up for pre-order at your local comic shop, or your favorite online retailer, and once again DST’s offerings represent the best of all worlds!

From Aliens to Batman: The Animated Series to Cthulhu, from Gotham to Ghostbusters to Godzilla, from Jay and Silent Bob to Star Trek, these new products are just what you never knew you needed. Plus: two returning products from Star Trek and Back to the Future! Read on for details, and pre-order today!

A Diamond Select Toys release! Talk about protection! Your spare change is safe and sound under the watchful eye of this all-new Xenomorph queen Vinyl Bust Bank. Based on the matriarch’s appearance in Aliens, this beautifully rendered bank features a detailed sculpt by Jean St. Jean  and a collectible-quality paint application, and stands alongside some of the finest Alien collectibles. But she also has a coin slot in back and an access door in the base, so she’ll guard your quarters like they were her own children! If you were going to put all your eggs in one basket, this is it! Comes packaged in a clear polybag with dorsal spines. (Item #SEP152158, SRP: $29.99) 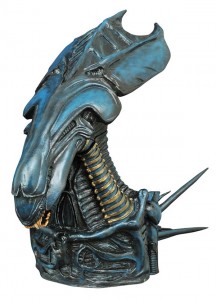 A Diamond Select Toys release! Catwoman just got busted! The master thief, who has been perpetrator, partner and paramour to Batman, is now the newest resin bust in DST’s line of busts based on Batman: The Animated Series. With her feline companion perched on her shoulder, this approximately 6-inch bust of Selina Kyle features detailed paint applications and a purr-fectly formed sculpt atop an art-deco base. The bust comes packaged in a full-color box with a certificate of authenticity. Limited to 3,000 pieces. Sculpted by Varner Studios! (Item #SEP152161, SRP: $59.99) 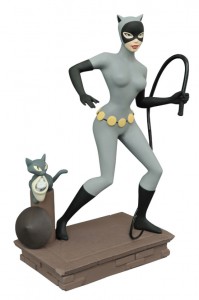 A Diamond Select Toys release! This cat has nine lives! Robbing the rich and running around on rooftops gets Selina Kyle’s engine racing, and now DST has captured her in the act with this 9-inch scale PVC statue! Standing atop a rooftop base with her feline friend, this PVC statue of Catwoman as she appeared in Batman: The Animated Series comes packaged in a full-color window box, and will fit in with the rest of your DC Animated Femme Fatales statues. Sculpted by Varner Studios! (Item #SEP152162, SRP: $44.99) 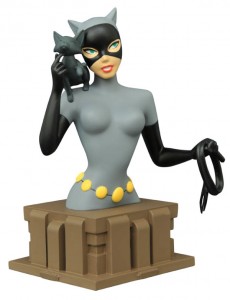 A Diamond Select Toys release! Even Batman needs a wingman sometimes! There’s nothing more annoying than fighting crime with a pocketful of loose change, so why not give it to your sidekick to hold? This vinyl bust bank of Robin is based on his appearance in Batman: The Animated Series, and features cartoon-accurate details, as well as a coin slot in the back and an access door in the base. Once secured inside the Boy Wonder, your money will be as safe as your secret identity! Packaged in a clear polybag. Batman bank coming soon! Sculpted by Varner Studios! (Item #SEP152163, SRP: $22.99) 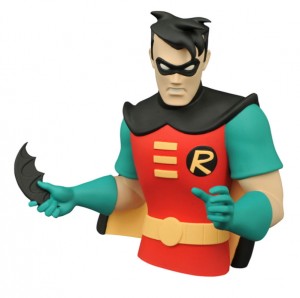 A Diamond Select Toys release! In his house at R’lyeh, dead Cthulhu waits dreaming… and glowing! This new, glow-in-the-dark vinyl bank of the Old God Cthulhu, as described in the stories of H.P. Lovecraft, measures approximately 8 inches tall and is cast in a glowing material that is recharged in sunlight. Bring him along when exploring the tunnels beneath the Mountains of Madness, or even the sunken city of R’lyeh! Packaged in a clear polybag. Sculpted by Eli Livingston! (Item #FEB158317, SRP: $22.99) 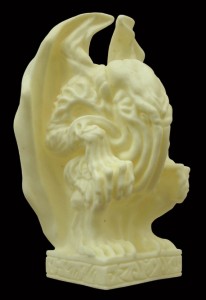 A Diamond Select Toys release! When Slimer’s thirsty, no bottlecap will stand in his way! The free-floating phantasm from Ghostbusters is known for his love of food, but he also enjoys a good beverage, and this metal bottle opener will pry a cap off of a bottle faster than you can say “He slimed me!” Plus, magnets on the back will hang Slimer on your refrigerator or containment unit until you need him again! Packaged in a full-color slipcase. (Item #SEP152172, SRP: $18.00) 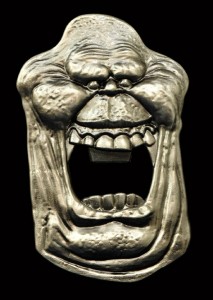 A Diamond Select Toys release! When the countryside is smothered in cheese, the government needs a solution! This plastic pizza cutter in the shape of Mechagodzilla’s head is the appropriate response to a large pizza that needs to be cut down to size. Grasp the head, roll the sharp plastic wheel across the pizza, then remove the blade for easy washing! Your pizza parties will be the talk of Monster Island! Packaged in a full-color window box. (Item #SEP152173,SRP: $14.99) 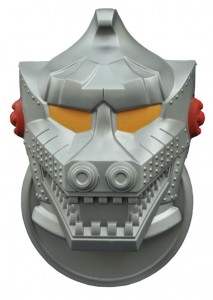 A Diamond Select Toys release! In Gotham City, there’s good shots and bad shots. Enjoy the good kind of shot in one of three different shot glasses inspired by famous Gotham City locations! From the TV show Gotham, belly up to the bar at Mooney’s, the bar with the fish logo, inspired by owner Fish Mooney. From Batman: The Animated Series, visit The Stacked Deck, where super-villains go to exchange stories about how they “Almost Got ‘Im.” Then go and earn a degree in mixology from Gotham City University, where the students study hard and party harder. Each shot glass comes packaged in a full-color window box. 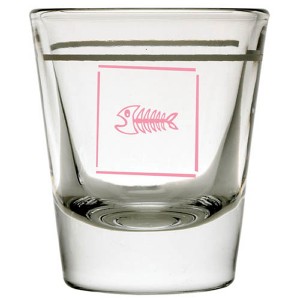 A Diamond Select Toys release! Always wanted to have Jay and Silent Bob head-bang right in your own home? Well, now you can with these all-new bobbleheads of the famous duo! Measuring approximately 7 inches tall, each resin bobblehead comes packaged in a full-color window box. Turn on some Russian heavy metal, set those heads a-noddin’, then sit back and enjoy the show! 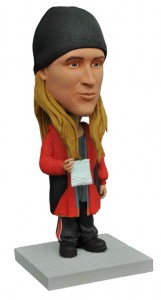 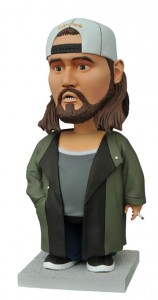 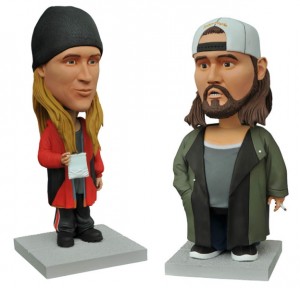 A Diamond Select Toys release! Remember that time in the 1970s when Deadpool got his own action figure? Neither does Deadpool! Realizing that a great injustice had been done, DST and EMCE Toys have teamed up to give the Merc with a Mouth the Mego-style 8-inch action figure he deserves. Arriving inside a retro-style window box, the figure is packaged in a tray alongside two bonus outfits – a more detailed, modernized Deadpool head and suit, and a white X-Force outfit with an unmasked head! Plus, more swords, guns and weapons than you can shake a taco at! Then take off all his clothes and have him dress him up in the costumes of your other Marvel Retro figures! Limited to only 3,000 sets. (Item #SEP152159, SRP: $80.00) 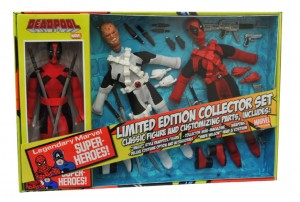 A Diamond Select Toys release! When Captain America throws his mighty shield, there’s gelatin for everyone! No other dessert will dare oppose a delicious gelatin made using this plastic mold in the shape of Cap’s shield. Measuring approximately 10 inches in diameter, snacktime at Avengers Mansion just got a lot more awesome! Packaged in a full-color window box. Not for use in the oven. (Item #SEP152160, SRP: $15.00) 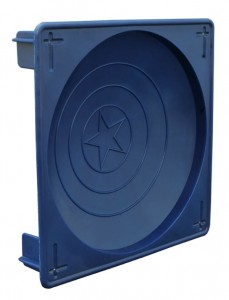 A Diamond Select Toys release! Get ready for the big sleep! This frighteningly tall 16” doll of Jack Skellington in real cloth pajamas reproduces the classic figure of old for a new generation of Nightmare Before Christmas fans. Packaged in a full-length coffin, with viewing window, Jack comes with pajamas, nightcap, and a large book about The Scientific Method. Perfect reading for when you’re trying to catch a few winks! Packaged in a coffin-shaped window box. Limited to only 1,993 pieces. (Item #SEP152171, SRP: $50.00)

Back to the Future OUTATIME License Plate Replica

A Diamond Select Toys release! Turn on your flux capacitor and fuel up your Mr. Fusion, because it’s time for another blast from the past! Long out of print, the Back to the Future “OUTATIME” License Plate Replica is back in the present, and ready for your collection! Recreating the legendary time machine’s famous tag, this full-size replica features window-box packaging perfect for shelf display, wall mounting or just spinning on a corner in between some flaming tire tracks. Packaged in a full-color collector sleeve. Not for street use after 1985. (Item #JUL084900, SRP: $35.00) 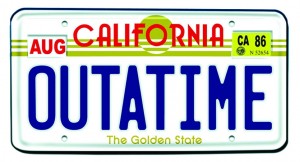 A Diamond Select Toys release! Demand for more of our Mego-style cloth-costumed Star Trek figures is so high, we had to warp around the sun and go back in time to make more! Back in stock for the first time in several years, this assortment of 8-inch figures includes Lt. Hikaru Sulu, of the starship Enterprise, as well as DST’s screen-accurate reworking of the Gorn! Each figure comes packaged in a collector-friendly plastic clamshell, with a full-color insert. Fill the holes in your Star Trek Retro collection, or start your crew from the ground up right here! (Item #SEP084792, SRP: $159.92, or $19.99/ea.) 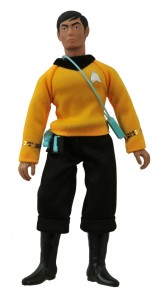 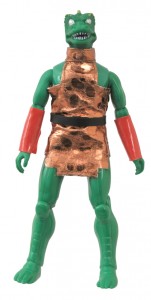 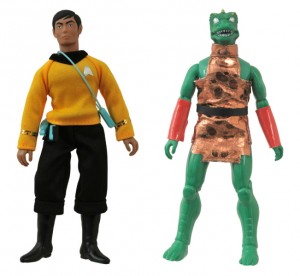