Community Season Six Is Gonna Be A Thing 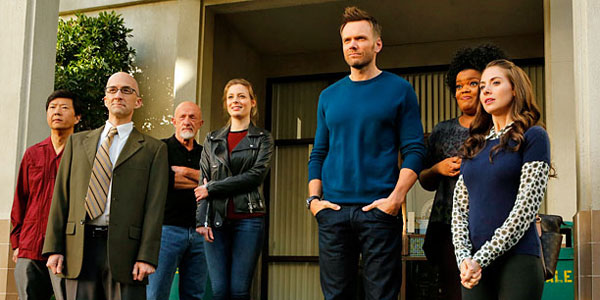 After weeks of rumors that Sony and Hulu were hashing out a deal to bring Community— the much beloved, rating challenged, smart and incredibly funny sitcom– back from the dead, it’s Yahoo who has finally made this move a reality.

The entire cast will return for the new season of 13 episodes, along with series creator and (usually) showrunner Dan Harmon.  That’s all very good news; While I adore the Community cast (or what’s left of them after the departures of Chevy Chase and Donald Glover), Harmon is the one that ties all the madness and magic into one cohesive experience.  The fourth season, in which NBC locked Harmon out of his own show, proved that fact.

What proved it even more was Harmon’s return for this past year’s Season Five, which delivered the best, sharpest and most brutally funny string of episodes of this series since Season One.  So, while the Season Five finale actually felt like a good place to say goodbye to Greendale, I’m very excited to see where they go from here, and they left us on a true high note, one I am confident Harmon and his cast and crew are ready to match.

The interesting thing with the Yahoo deal is how much more freedom this will allow the production.  The new season will still be 13 episodes, but the length may change, leaving some episodes longer than the typical 21 minute sitcom length.  I can see that working to Community‘s benefit, especially in one of their more Immersive storylines.

So I dunno about you, but I’m going to call this good news!  And with the deal official, it looks like the new season could launch as soon as this Fall.  That’s probably sooner than NBC would have released it, had they not cancelled it.  The jerks.