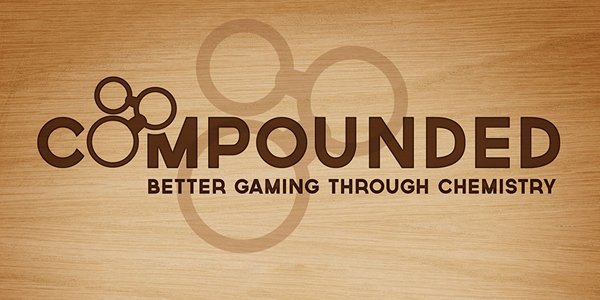 Months after a rather successful Kickstarter campaign, Darrell Louder’s Compounded, published by Dice Hate Me Games, has shipped to eager backers worldwide. 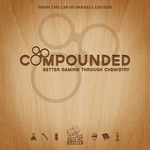 Compounded is essentially a game of resource management, designed with a slew of creative mechanics – a brilliantly executed, fun experience that mimics the controlled chaos of working with volatile substances.  Two to five players take on the roles of scientists, managing a lab and trying to outdo their colleagues by completing certain chemical compounds before the others are able to.  Each successful bonding will grant the scientist who completed it with victory points and proficiency in certain areas of experimentation, as well as possible acquisition of helpful lab tools.  Set up is fairly simple – the score board, which cleverly makes use of the periodic table, has a designated area to place small cardboard tokens which represent the various lab tools and is placed within view of the players.  Three of these tools (the graduated cylinder, pipet, and journal) are always placed so there are one fewer than the total number of players available.  Most of these tools can be discarded during certain stages of play to gain powerful benefits.  There is also a space on the scoring table for a pile of 15 flame tokens, which are used during the course of the game to show which explosive compounds have caught fire and are dangerously close to detonating.  Each player is also given a workbench, illustrated with four test tubes and a designated area for storing raw elements, and all the wooden discs of their player’s color.  Four of these discs are placed at the bottom of each of the four test tubes on the workbench, each tube representing an experiment in progress.  One disc is placed on the scoreboard to use as a point marker and the remaining three are used as claim tokens, used to stake claim to a compound for scoring purposes.

The compounds in question are all represented on a deck of square cards, the first sixteen of which are laid out in a 4×4 grid within everyone’s reach — this creates the play area.  The remaining cards are divided into several decks so that the dreaded “Lab Fire” cards can be inserted in a uniform fashion (or alternatively shuffled in randomly for an even more chaotic experience) and then re-stacked to form the draw deck.  Starting with the lead scientist that players have chosen to start the game, each person draws four elements blindly from a supplied bag.  The elements are represented by translucent plastic colored crystals and there are different amounts of each in the bag, with clear hydrogen being the most plentiful and yellow sulfur being quite rare.  In future turns, the number of elements one can draw is indicated by their ranking on their first test tube, labeled “Discovery,” which starts at the number two.  Similarly, the other test tubes share the name of that phase of play and can be leveled up to grant the user benefits.  For example, after everyone draws their elements, the next phase, “Study,” begins with everyone’s starting position in that tube listed as “one.”  This means they may take only one of their three claim tokens and place it on any unclaimed compound in the grid.  As this experiment is upgraded, players make be able to stake claim to three compounds at one during this phase.  Once scientists have claimed their compound cards, the “Research” phase begins and they may start placing elements, starting with the lead scientist – again, per the number listed on the Research tube: 2.  Elements are placed on compounds in hope of completing them and scoring the amount of points indicated. Carbonyl Sulfide, for example, requires an oxygen, a carbon, and a sulfur crystal to complete its bonds. 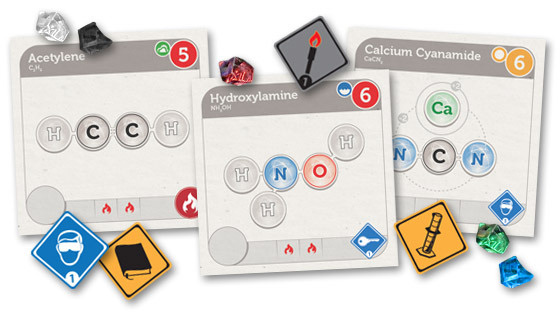 Once all the required elements are placed, it can be scored at the end of the round – this leads to the final phase of each round, the “Lab” phase.  In the case of Carbonyl Sulfide, the player would score six points on the scoring table as well as move up one level in their “Research” experiment and acquire a Bunsen Burner (which can be used to add a flame token to a compound of their choice later in the game).  The elements needed on each card are easily recognizable both by their two-letter abbreviations and their color.  There are no compounds that let you specifically increase your “lab” experiment tube as, instead of scoring any other experiment, you may instead increase your “Lab” footing.  This increases the amount of elements you can store on your workbench, from four all the way up to seven.  All completed compound cards are given to the scoring scientists and the grid is refilled from the draw deck.  If one of the Lab Fire cards is revealed, it may result in a compound exploding that already has elements placed on it from prior rounds.  If this happens, the card is removed, any claim token it had is returned, and the elements are scattered (if possible) to surrounding compounds.  In a pinch, each player is given access to their one fire extinguisher (which they will first need to charge by placing two oxygens and a carbon during Research phases).  This can be discarded to prevent a flame token from being placed.  If the extinguisher is completed but unused at the end of the game, it’s also worth four points.  Similarly, each player has one “wild” token which can be traded in for any element (other than Sulfur) or is worth 2 points at the end of the game.  Phases continue as players draw new elements, claim compounds, and place their crystals in hopes of scoring big until either the score reaches 50 or a scientist maxes out three of their four experiments, which signals the last round of play.  The game ends immediately if the compound grid cannot be filled to capacity (i.e. the draw deck runs out).

The streamlined mechanics of drawing and placing elements while being mindful of the flammable chemicals in the lab makes for a fast-playing title with some great strategy and push-your-luck decisions.  What really made me love the game though, was the great player interaction.  Even while players are viciously trying to complete compounds, there are a number of ways to cooperative with your fellow scientists…or pull the rug out from under them.  During the Discovery phase, after elements are drawn, everyone is free to trade just about anything (aside from points and experiment levels).  Elements, wild tokens, fire extinguishers, and even favors can be put up for grabs.  This can lead to heated and desperate negotiations as players try to get their inventory in line by making mutually beneficial agreements.  I really enjoyed this semi-cooperation, which is explored even further in the first Compounded expansion (which ships with the Kickstarter copies but will be available separately to non-backers as well).  This includes double-wide compound cards that are quite difficult to complete and require two claim tokens to be placed on them, presumably from two different scientists who can both score upon its completion.  Placing the claim tokens themselves is really where the strategy of the game comes in, as players can stake a claim to a “safe” non-flammable or high-scoring element early on but choose to try and complete unclaimed elements before others.  In this case, they are able to place one of their unsued claim tokens as a hold on that compound, showing that they will gain the points for it at the end of the round.  Savvy players will be able to steal attractive compounds right out from other players who hadn’t been able to claim or complete them yet, making the lead scientist position a powerful seat to have at any given time.  As some compounds have specific effects when scored, such as triggering immediate fires, the lead scientists (who always scores his cards first) may also be able to wipe other completed cards out before they can be scored by others.

With the right group of friends, this game can be an absolute blast.  Just to put that in perspective, one member of a group I regularly game with described his first playthrough of Compounded to be – and I’m not exaggerating – the greatest moment of board gaming he had experienced (see below).  This was in reference to me staking claim to both sides one of the aforementioned larger compounds and working over several rounds to complete it.  It already had a flame token on it and didn’t have a completed fire extinguisher.  At the end of each round there was increasing tension that a fire would break out in the lab and erase my work, but I kept dodging the bullet.  Then, with only one element remaining to be filled in order to score and gain the lead (an element that I already had on my workbench but could not place just yet due to the limits of that experiment track) a fire erupted and the other four scientists went ballistic.  There was much trash-talking, yelling, a nearly flipped table, and more importantly, a very memorable session.  I was also treated to mocking Facebook updates and those detestable BitStrip comics for days following.  Here are a couple examples of them rubbing salt in my wounds: 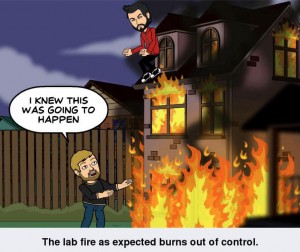 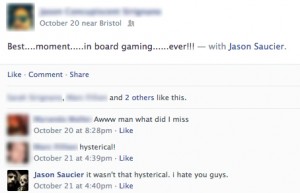 The point is, it takes a rare type of game to evoke that kind of reaction.  Even the most cynical members of our regular group, who loathe all but the most select, tiny list of titles, were singing Compounded’s praises by the end of the game.

Just to touch on the components quickly, I was pleasantly surprised just how nice everything looked when I broke the seal on the box.  The Periodic Table board was a great idea and looks fantastic on the table, really helping to drive the theme of the game.  I was probably most surprised with the quality of the individual workbenches, expecting cardstock or thin cardboard but instead getting these awesome, thick boards with a graphic wrapped around the edges.  The cardboard punch tokens detached easily with no tearing and no their job well, although I wish the flame tokens were a hair larger.  All the wooden bits are just as you’d expect and presented in a nice, distinctive color palette with stickers to affix on top (and sometimes bottom) of each – the claim tokens have a slightly different sticker on their underside so players can tell if they were placed as temporary score markers on a previously unclaimed compound they completed.  Each box also includes a beautiful wooden lab key to designate the lead scientist, which passes to the next player in a clockwise fashion at the end of each round.  The element bag is nice quality, the element crystal design they went with was a great choice, and the cardstock for all the provided compound cards is nice and thick.

Compounded was a big surprise for sure and it will surely be in the regular rotation of the boxes that hit our table every week.  With quick-playing, fun gameplay and top-notch components, designer Darrell Louder really knocked it out of the park here and I look forward to seeing what he dreams up for possible expansions or future releases.