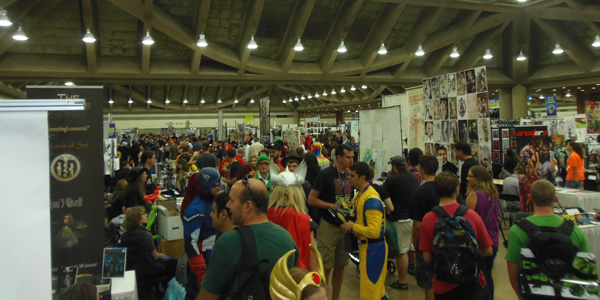 Baltimore Comic Con 2013 was another interesting show. For past three years it’s been different for me every year. Year one I went as a toy fan looking to buy anything that I didn’t have or that was introduced as a SDCC exclusive. Year two I was into comics again with the introduction of the new 52. Year three I went as not only a fan but a press writer, and a Comic writer as well, with the introduction of a new character Jack Rider. Only three years? No I have actually have been going for 13 years now. 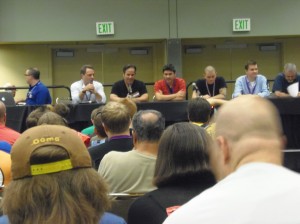 News wise I got to sit in on the DC panel. Dan Didio started off with Batwoman. He wanted to settle the rumors about her and the marriage that got shot down. His reasoning behind not allowing the marriage to happen was they wanted to stick with the complications of being a Batman character and how it affects their social lives, meaning they are not to have long term happy relationships because of them being heroes. Sounds good right? Not really but they took the high road, and never allowed for Q& A session afterwards.

Next they addressed Villains Month. Not much to say here as by now everyone knows about it again they avoided the topic of the 3-D covers or lack thereof. Next up was the Lanterns and what direction they are going with them. Another cross over event? Didn’t we just have 2 in a row with the Third Army, and The First Lantern?  DC decided we needed another starting in October to introduce a new villain to the Green Lantern universe. Relic will be a character that wants to rid the universe of all Lanterns, and his first appearance will be during Villain’s Month.

Their big news was Harley Quinn Issue 0 and how artists can become a part of the book and earn a job working for DC. If you go to DC’s website you’ll see a link for DC’s open talent search. Here’s your chance to join DC by drawing a page from the Harley Quinn issue. The outline for the page is to have Harley attempt suicide  in 4 panels, ironic considering it is suicide prevention week. Needless to say this has caused quite a stir. 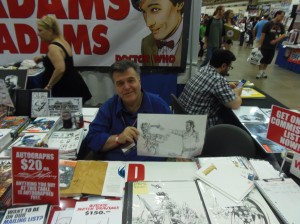 The show floor was much busier than I have seen it in years. A lot of good people there for signings and sketches. I was able to a Walking Dead sketch from none other than Neal Adams. The list of writers and artists were wide and carried from Denis Kitchen, to Jim Zub, and Terry Moore, and so on. The highlight of my day was being able to sit and chat with Steve Scott. I have talked with him many times via Facebook, and emails. Steve works out of Three Alarm Comics in Mississippi where our own Jay Q works part time. Steve was great. Very knowledgeable sharing do’s and don’ts when trying to get your comic published. Steve if you don’t know has worked with the big two titles which included Batman, and Xmen. He is now working on a new project called Blue Nemesis with James Maddox. I got the chance to look through a few pages, and all I can say is you will be wowed. Sci Fi at its finest. If you want to know more go to the Blue Nemesis Facebook page and click like to follow their progress. 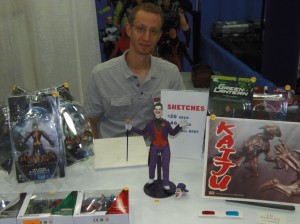 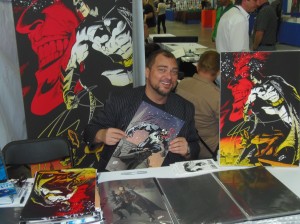 Another highlight was seeing the yet to be released Sideshow Joker. What a great design and figure. Batman fans will truly appreciate the amount of detail that went into the character design. Based of the 1988 The Killing Joke design. Thank you Paul Harding for showing it off.

Companies out in force were, Valiant, Boom, IDW, Top Cow, and DC Comics. Each had some great guests from their titles. The one I missed out on was going to be there on Sunday is Fred Van Lente. Fred is quickly becoming a highly requested writer. His Works include GI Joe, Mocking Dead, and Archer and Armstrong. 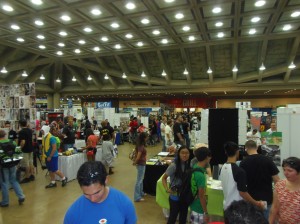 I tried not to focus on my book for this article. I just want to touch on it a bit with you. Being new to comic writing it was exciting to be a part of a show I had only been a fan of before now. To be included among the greats of this industry was quite humbling . Being an exclusive to Baltimore Comic Con and making it on the exclusive page was also exciting. I do realize I still have a long way to go before I can call myself one of the greats, but to even be mentioned makes one feel good.

It was another great year at Baltimore Comic Con. If you made it out I hope you enjoyed yourself as much as I did. If you didn’t make it out you truly missed out. Baltimore is quickly becoming one of the big shows among the Cons. As every year goes by the show grows in talent, and enthusiasts alike. Only 364 more days till the next show. In the meantime be on the lookout for Blue Nemesis by James Maddox, and Steve Scott, Jack Rider by Mike Hopkins, and Nate Getz, and The Patrol, By Tony Calandra, and Nate Getz. Till next year.