The Conjuring Is The Best Scary Movie Of The Year 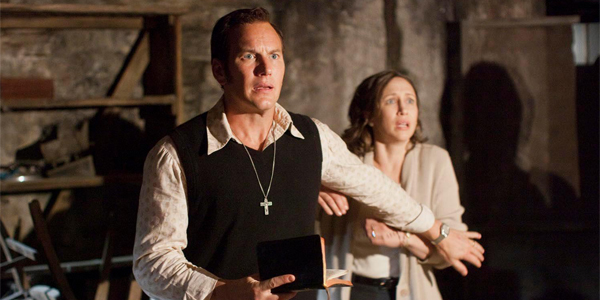 Smart, sleek and stylish, The Conjuring nails the creepiest case in the Warren’s files.

Sometimes a movie doesn’t have to be huge to be great.  There is honestly little in The Conjuring that feels larger than life, virtually no spectacle that leaps far and away past reality.  But this grounded, realistic scope of the film, combined with a well-told story, incredibly capable direction and some fantastic performances make this one of the year’s best films.  And for the record, it’s scary as hell, too.

The Conjuring follows the paranormal encounter of the Perron family, who move into an old farmhouse and are almost immediately beset by terrifying occurrences that defy explanation.  The family dog mysteriously dies, most of the family’s six children begin to be affected in different ways by the strange forces within the house, and the mother, Carolyn (Lili Taylor) seems to be particularly targeted, as bruises and lacerations begin to manifest on her body with no seeming cause.

The movie’s hauntings start small, but effective– heightened noises in the dark, the croak of an old door opening and closing, and a remarkably eerie hidden basement all paint a very menacing, atmospheric base on which the terrors inflicted on this hapless family continue to build.  We’re given just enough on Carolyn, her husband Roger and their six daughters to care about these people, and their larger than typical family feels refreshingly authentic to the real life events that inspired the movie, while also establishing an answer to the age old questions “why don’t they just leave the haunted house?”

But as the home’s frightening secret history unfolds, we realize that unlike most haunting movies, no one in this family are our protagonists.  The heroes are Ed and Lorraine Warren, the real life paranormal investigators who collaborated on this demonic case.  Patrick Wilson and Vera Farmiga are perfect as the demonologist couple, who are painted in a very balanced light.  The Warrens have been controversial figures in real life, with multiple critics attempting (and sometimes succeeding) in debunking their work. The film goes to great lengths to portray the duo as skeptics until disproven, as we catch glimpses of them solving apparent hauntings before facing the very real demonic presence within the Perron’s home.

The Warrens make for a pair of fantastic cinematic heroes, each bringing their unique talents to accomplish these horrifying and seemingly impossible feats– Lorraine is the more spiritually connected of the two, with the ability to sense presences of spirits and otherworldly beings, while Ed uses his knowledge and innate fearlessness to confidently walk into a dark room that most people would run away from in a heartbeat.  There’s a refreshingly old school manor to the Warrens’ heroics– while initially hesitant to help Roger’s request to investigate the farm house (especially since it is established that using her powers puts a clear toll on Lorraine each times she uses them), once the investigators discover the very real presence of evil they are fully on board.  Instead of just relying on crosses and holy water (don’t worry– those are here, too) the Warrens employ elaborate systems designed to record visual and audio evidence of the haunting, which they use to investigate what happened to develop these problems, and provide justification to the church to exorcise whatever harmful spirits refuse to leave.

As the frequency and severity of the hauntings continue, and the scares are delivered increasingly fast and furious, the presence of the Warrens feels like a consistently assuring sign.  Their presence doesn’t take away from the fear so atmospherically painted by James Wan’s confident direction, but it makes The Conjuring feel unique among its fellow scary movies.  Where most scary movies would leave me exclaiming why the hero would go into that room with no lights or defenses… in The Conjuring, I cheered the Warrens on as they did so.  This movie is being loosely referred to as “The Warren Files,” which makes me hopeful that it will be the beginning of a franchise portraying more of the investigator’s cases.  If that comes to be, as long as future installments feature storytelling and astmospheric creepiness this well done– and more gangbusters appearances by Farmiga and Wilson in the title roles– I’ll be on board this potential franchise as long as they keep making them.