How Cool Are These Big Trouble In Little China ReAction Figures??? 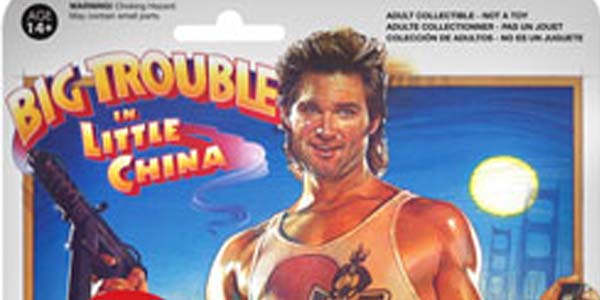 John Carpenter’s action-fantasy masterpiece gets the retro toy treatment, and I could not be more excited!

I’m gonna be straight with you guys– I LOVE Big Trouble In Little China.  I’ve been moderately obsessed with the movie since I first saw it as a little kid.  It totally earns it status as a cult classic, sure… but I think one day this movie will be truly appreciated for the genius action flick-meets-parody-meets-legitimate action flick that it is.  I’ll totally agree that it’s a B-movie… but in this case, that “B” stands for “Brilliant.”

So I was totally stoked as soon as Funko announced they’d be releasing a set of ReAction figures based on the movie.  And now I’m even MORE ramped up, because the series is not only scheduled for release NEXT MONTH, but they look kind of awesome!

I say “kind of” because Jack is a little disappointing.  The costume is perfect, from the cheesy tank top to the boots and machine gun… but there is like NO Kurt Russell in that portrait.  It’s especially odd because the ReAction Snake Plissken did a great job of resembling the very same actor, from the same era, while still maintaining the retro aesthetic.  It’s kind of a disappointing step backwards.

Everyone else, though?  Totally amazing!  I love that we’re getting Gracie in her wedding dress.  This outfit would totally have been the one Kenner opted for back in 1986, since it has such an interesting visual flair.  I’m also totally stoked to see her headdress is removable, which is a great touch.  Lo Pan also looks great, totally creepy and sinister with his black robes and claw-like nails.  And lest we forget– he even comes packed with The Guardian.  Amazing!

The Three Storms all look totally great, too.  Lightning was always my personal favorite, but I am happy to see Rain and Thunder are also getting the toy treatment, rounding out the menacing trio in plastic form.  The card art for these guys is great, featuring one of the movie’s painterly posters, giving them a perfectly authentic air of 80s accuracy.  If you can’t tell, I am SO stoked for these figures.

My hope is that these guys are the best-selling ReAction figures yet, and that Funko does a second series.  While it feels very true to Kenner’s model to ignore Wang (the REAL hero of the movie), I still want him in toy form.  I’d be equally stoked to see an Egg Shen figure, and the Sewer Monster… even a Jack variant with his lipstick face would be killer!

But for now, I’ll settle for these six figures.  Do me a favor, and pick these guys up when you see them, to let Funko know there’s a rabid fanbase for this property.  Now, if you’ll excuse me, I’m gonna go rewatch BTILC for the millionth time, while I eagerly await stalking these figures at the Barnes and Noble down the road.