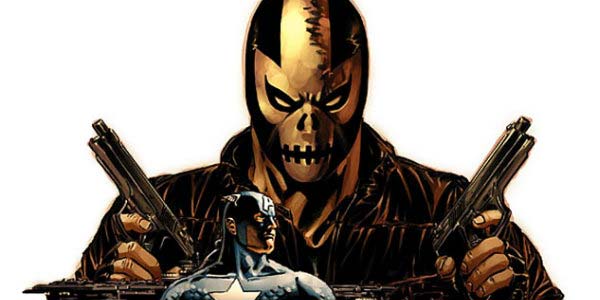 Here’s what Captain America’s nemesis will look like in Civil War!

Frank Grillo’s Brock Lumlow got his ass handed to him (and badly burned) in The Winter Soldier, but he didn’t die.  Comic readers should know that this was setting him up to return as Crossbones, one of Captain America’s cornier enemies until he was rebooted into a serious badass by Ed Brubaker during his run on the Cap comic.

True to his source material (well, except for the burned part) Lumlow will be going full super villain in Captain America: Civil War, and he looks pretty awesome.  I love the body armor, an update of the STRIKE gear Lumlow wore last time we saw him, and the crossbones and skull as paint on his chest and mask are definitely eye catching.  I’m curious what’s going on with his gloves– are they cybernetic?  Or just weaponized attachments?– but overall I think Crossbones has officially become the next Marvel character effectively adapted for the big screen.

I’m stoked Crossbones will show up in this movie, and his role suggests there’s a chance Marvel may lean in close to the source material with where the comic version of Civil War ends up.  I have to admit, though, coming off the semi-bloated Age of Ultron, I’m a little nervous this movie will be too packed with stuff.  I mean, we’ve got Steve Rogers versus Tony Stark, the next chapter of the Winter Soldier’s story, Crossbones, Baron Zemo, and the first on screen adventure of the new Avengers, revealed at the end of Age of Ultron.  It’s not impossible to pull this off, and I have a lot of confidence in the Russo brothers… but if they deliver on a movie this stuffed as well as they did with the same confidence and energy we saw in Winter Soldier, then Cap’s third solo movie could become the new standard of comic book movie sequels.